For the umpteenth time, the U.S. Department of Homeland Security (DHS) has delayed the date when it will stop accepting some states' standard-issue driver’s licenses as valid identification at U.S. airports.

Last year, DHS extended the deadline for obtaining a REAL ID-compliant driver's license to May 3, 2023. Today (Dec. 5, 2022), the department announced yet another extension to May 7, 2025. That move gives travelers more than two full years to either obtain a state driver's license that is compliant with the REAL ID Act of 2005 or another type of identification which will be acceptable under the provisions of that act.
Similar delays in the past have been the result of a lack of full state compliance with the requirements for issuing the more secure driver’s licenses. But this time, as with the extension announced in 2021, it is because of the COVID-19 pandemic, according to DHS Secretary Alejandro Mayorkas. He says state motor vehicle departments need more time to work through the backlog of applications created by the pandemic.
"This extension will give states needed time to ensure their residents can obatin a REAL ID-compliant license or identification card," he said.

When I joined the federal disaster relief effort in October 2017, the TSA had be warning residents of five states that, starting Jan. 22, 2018, they would need an alternative form of identification to fly because their states' processes for issuing standard driver's licenses did not comply with a provision of a federal law passed in 2005. It was a good thing I also brought my passport, as I'd be deployed to the U.S. Virgin Islands until Jan. 26, 2018.
However, by the time I was demobilized and headed home, the TSA had bumped the effective date to Oct 1, 2020. It then delayed it to Oct. 1, 2021, then to May 3, 2023 and now to May 7, 2025.
Why the change?
The need for a state to certify that its driver's licenses are only issued to citizens and legal immigrants is contained in Public Law 109-13, which is also called the REAL ID Act, was passed in May of 2005. It mandates that states and territories must require proof of U.S. citizenship or proof that a person has been “lawfully admitted for permanent or temporary residence in the United States” before issuing a driver’s license or state ID card for those documents to be considered acceptable for “official federal purposes.” 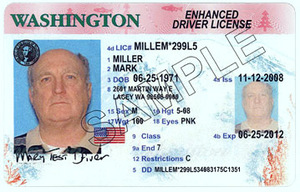 As of this writing, a U.S. passport costs $130 for adults renewing by mail and is good for 10 years. First-time applicants will also be assessed a $35 processing fee. Enhanced driver's licenses in Washington state cost $115 for the first issuance and are good for five years if issued in 2023 or 2024, which is $35 more than a standard driver's license.

On an annual basis, the cost difference is minimal when comparing a passport and an EDL. A passport costs $13 per year while an EDL costs $7 additional per year over a standard driver's license. Because EDLs only allow international travel to Canada or Mexico by land or sea, anyone who plans to travel internationally would do well to consider obtaining or renewing their U.S. passport.  The additional flexibility it provides is well worth an additional $6 per year.