Going for (and using) Global Entry

on February 04, 2019
Once again, I have been pleasantly surprised by how efficiently a government program is being run. This time, it was my experience using the U.S. Customs and Border Protection’s (CBP) Global Entry program.

I used my Global Entry credential for the first time when returning from New Zealand to the U.S. through Honolulu. After collecting my bag, I proceeded to the Global Entry kiosk, followed the instructions on the screen, and was through customs in a matter of minutes. As an added bonus, I didn't have to fill out the paper customs declaration that airlines generally provide prior to landing. I didn't know that until the customs officer told me, but next time there will be no wasted effort filling out the form (and playing with the pencils).

That experience was quite similar to the positive experience applying for and receiving my credential as a “Trusted Traveler.”

After renewing my U.S. passport, I decided to upgrade from the TSA PreCheck program I joined in 2014 and apply for Global Entry. For a non-refundable application fee of $100, the program would give me expedited clearance through U.S. Customs upon returning to the U.S. from overseas and would provide me with access to TSA’s PreCheck lines whenever using a U.S. airport that offered the service for a period of five years. TSA PreCheck alone costs $85 to apply and, if approved, is also good for five years so for an additional $15 I added the benefit of expedited processing when coming home from outside the U.S.

My renewed passport arrived in my mailbox on Oct. 22 and I immediately went to the Customs and Border Protection web site to start the Global Entry application process.

On Nov. 4, less than two weeks later, I received notification that my application had been “conditionally approved,” advising me of my Global Entry membership number (also known as a “known traveler number”) and advising me of the next step: scheduling an in-person interview at which I would be fingerprinted and photographed, and would complete the application process.

Checking the schedule for the enrollment center at my home airport, Seattle-Tacoma International (SEA), I noted that the next available appointment was Dec. 29. Because I didn’t want to wait almost eight weeks, I began checking other centers within striking distance. Most of the centers are located in airports, so it would be a simple matter of choosing a date when I could make a day trip – fly in, do the interview, and fly home – perhaps even using frequent flier miles for the trip.

The center at San Francisco International Airport (SFO) had an available appointment on Dec. 26, but three days sooner than my home airport was not enough to make the trip worthwhile. Appointments at Los Angeles International (LAX) were not available until Jan. 19, 2016. Portland International (PDX) had the longest wait, with the first opening on March 23, 2016.

Scrolling through the list of centers, I noticed one near the U.S.-Canadian border in Blaine, Wash., about a two-hour drive north of Seattle. To my surprise, appointments were available the very next day, so I seized upon it and scheduled an appointment just before lunchtime, allowing me enough time to drop my wife off at her job in downtown Seattle, then make a leisurely drive up I-5.


I arrived at the center about an hour and a half ahead of my scheduled appointment time but staff was very helpful and worked me in sooner. The appointment consisted of them reviewing the paperwork I’d brought including my conditional approval letter, passport, driver’s license and birth certificate followed by a brief in-person interview, fingerprinting and taking my photograph.

The CBP agent told me I could start using the known traveler number I’d been provided in my pre-approval letter immediately to gain access to TSA PreCheck lines as opposed to using the general security lines. She also indicated that my Global Entry card would take about 10 days to arrive, I would have to activate it online once I’d received it, and could then start using the Global Entry kiosks or SENTRI and NEXUS lanes at land borders or seaports.

By the time I returned home, I’d already received an email notifying me that my “status has changed.” When I logged on to the CBP’s enrollment system, I received my final approval letter which stated, among other things, that I could “…begin using the program immediately” (emphasis in the original).

This minor miscommunication was easily cleared up by the CBP's team in Washington, DC.

"Once approved, members are able to use the Global Entry kiosks immediately. They do not have to wait for the card," a CBP spokesperson told TheTravelPro in an email. "The card is, however, required to use the NEXUS and SENTRI lanes at the Northern and Southern land borders. The sole purpose of the card is to enable Global Entry members to use NEXUS/SENTRI lanes.”

Overall, the process went very smoothly and more quickly than I had anticipated. I had the Global Entry credentials that give me to access expedited Customs processing in two weeks flat! I received my Global Entry in the mail on Nov. 16, meaning the process went from start to 100 percent complete in less than four weeks. Very high marks to the agency and the people involved. 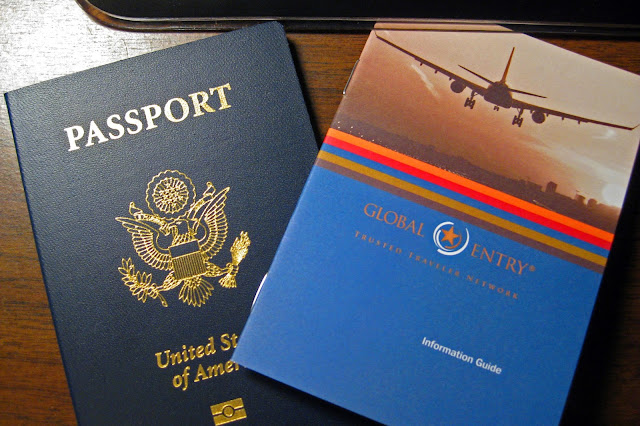 First, a Trusted Traveler program like Global Entry, NEXUS, SENTRI or TSA PreCheck can save lots of time and hassle, which is important to those of us who travel frequently. If you seldom travel outside the U.S., the PreCheck program might be sufficient but considering that the Global Entry program also includes PreCheck access and allows use of the NEXUS and SENTRI lanes when returning to the U.S. from Canada or Mexico for an additional $15 every five years, the Global Entry program seems to provide the greatest benefit.

Second, if you have the flexibility and/or have international travel planned in the near future, don’t just check the enrollment center nearest you. A short drive or flight could shave weeks or months off the time it takes to get those valuable credentials.

Third, many credit cards - especially airline affinity cards - have begun offering a $100 credit for cardholders who enroll in one of the trusted traveler programs. If you carry such a card, check with the issuer to see if you qualify.

Wishing you safe and happy travels!