Columbus, Ohio - My first stop on a long-ass road trip

on October 15, 2019
I have just returned home from my longest trip to date - 109 days without a trip home. Let me expand on what kept me away so long.

When the need arises, I work with the federal government's disaster relief effort.  That includes the big events that make the news, like Hurricanes Harvey, Irma and Maria in 2017 (referred to as "HIM") and Hurricanes Frances and Michael in 2018.

But it also includes disasters that might be describes as "smaller" -- unless, of course, you're one of those affected. Those disasters rarely make national news and often not even the regional news; they're quite local and affect relative few people compared to, say, Hurricane Katrina.

This year, I worked disasters in no fewer than nine locations during my time away, and got glimpses of a number of places I might never have seen. Because these particular disasters didn't cut a broad swath of destruction, there were plenty of places that were unaffected and operating as they always have, allowing me to enjoy many of the things these areas had to offer.

Now that I'm back in the warm embraces of my home (and my wife - nudge, nudge), I'd like to share some observations from the point of view of one who was not a local, but not just a tourist, either. Rather than try to cover all nine locations in a single post, I'll spread them out.

Understand that these recaps are not presented as all-encompassing; they might more accurately be described as hyper-local because, for the most part, my job defined the parameters of my wanderings.

These vignettes are a reflection of what I experienced and what I enjoyed. Sure, there were things that were mediocre and even bad, but I'll steer clear of spending much time on my negative experiences to focus on what I enjoyed and what you might enjoy if you should visit any of these locations. 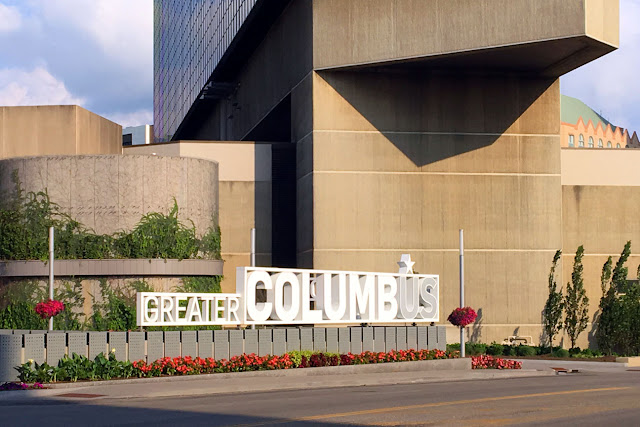 My first "post of duty" or POD, as someone once termed it, was Columbus, Ohio following storms that warranted a Presidential disaster declaration. The damage was spread across a number of counties in southwestern Ohio, but it was spotty: some here, some there, with no broad path of damage stretching from Point A to Point B.

As a result, there were plenty of places to stay and things to do that hadn't been noticeably affected.

My hotel in Columbus was the DoubleTree Guest Suites in downtown, a spot I found very convenient for a number of reasons, but with a drawback or two.

One drawback were the "hotel-high" prices at the bar and restaurant. Sure, there's a "convenience premium" for not having to get in the car and drive to breakfast, but I thought the hotel pushed the envelope a bit in this regard.  Fortunately, it was close to the downtown core and other restaurants nearby provided more interesting and more economical options.

Among my favorites was Condado Tacos, which had a great happy hour and included an interesting array of tacos as well as the "make your own" menu. Another establishment I enjoyed was Due Amici on Gay Street. I visited both several times and left smiling each and every time.


On my first visit to Due Amici, it was Happy Hour with live music and a packed house. I was squeezed in to the servers' station at the bar but was nonetheless looked after very well.


The baked brie appetizer and a glass of wine was all I needed that evening. The next time I visited was quieter, but the service was still quite attentive and the food? Delicious!


Who does lamb chops as an app? Due Amici, and they were perfect. Cooked rare as I requested them, they were succulent and just filling enough.

On another evening, one of my colleagues recommended Cafe Istanbul.  While I don't know Turkish food per se, I do know Greek food and all Mediterranean fare shares similar characteristics. The food at Cafe Istanbul was also quite delicious and well-prepared.


I enjoyed lamb kabob that was generous enough to take half back to the hotel for another day. The only caveat I would offer is that the Turkish wines, which come at a premium, aren't much different (or better) than California wines of the same varietal.

Another place I enjoyed, though I learned later that it's a chain, is First Watch.  I thought the breakfasts were interesting, though my wife thought them a bit "new age-y" for her taste, with things like a quinoa bowl and other similar bean-curd-nibbling options.

A couple of places I won't go back to and will not recommend: Pierogi Mountain (with apologies to Diners, Drive-Ins and Dives, which thought a lot of it), Tiger + Lily, and Plank's Bier Garten.

I'm half-Polish and grew up eating my grandmother's pierogis. Although not the best Polish cook, hers were worlds better than Pierogi Mountain's. Tiger + Lily had some interesting food but I found the service substandard, as I did at Plank's Bier Garten.

One must-visit in Columbus in Jeni's Splendid Ice Cream. Even if you only like ice cream, Jeni's is a place you must try, as her flavor combinations are a cut above.  For example, one "collection" includes a sweet-tart “brambleberry crisp” made with jam of blackberries and blackcurrants layered throughout vanilla ice cream. Others include brown-butter-almond brittle, salted peanut brittle with chocolate flecks and, of course, salted caramel.

There are several "scoop shops" around Columbus. And should you be there on your birthday, you're eligible for a free scoop!