Seattle-headquartered Alaska Airlines has named the two senior leaders who will be responsible for running Virgin America as a subsidiary of Alaska Air Group from the time the transaction closes until the airlines obtain approval to operate as a single carrier.

Ben Minicucci, who is Alaska Airlines’ president and COO, will take on the additional duties of CEO of Alaska Air Group’s (NYSE:ALK) Virgin America subsidiary when the acquisition closes. Minicucci has served as Alaska’s COO since December 2008 and has held a number of positions with the airline including vice president of Seattle operations and staff vice president of maintenance and engineering. 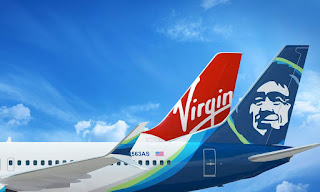 Peter Hunt, who is currently Virgin America’s (NASDAQ:VA) SVP and CFO, will serve as president of the Virgin America subsidiary and will report to Minicucci.

“Peter is a proven and trusted leader at Virgin America and is well-positioned to lead the airline and its teammates through the transition,” Brad Tilden, chairman and CEO of Alaska Air Group, said in a statement announcing the arrangement.

Hunt and his colleagues at Virgin America have clearly been doing many things well.

In the annual Skytrax World Airline Awards that were announced at the Farnborough Air Show outside London earlier this week, Virgin America placed No. 25 on the list of the World’s 100 Best Airlines, the highest of any U.S. airline and well ahead of the next highest, Atlanta-headquartered Delta Air Lines (NYSE:DAL), which was No. 35. Alaska Airlines was a somewhat distant third among U.S. carriers, coming in at No. 60 on the top 100 list.

Those numbers suggest that Alaska could learn some things from the airline it is set to acquire, as outlined in the open letter below.

As a loyal Alaska customer since moving to the Pacific Northwest in 1983, I urge you to look at the pending acquisition of Virgin America as more than just acquiring the routes, landing slots, equipment and personnel. Look at it as an opportunity to acquire at least a measure of Virgin America’s culture.

Your predecessors Ron Cosgrave and Bruce Kennedy changed Alaska’s culture from “Elastic Airlines,” a reference to its erratic schedule under Charlie Willis’ chairmanship, to an airline that has the best on-time arrivals record of all U.S. mainland airlines. Among all U.S. carriers, only Hawaiian Airlines (NYSE:HA) has better on-time performance.

You now have the opportunity to morph Alaska from a fine, if a bit conservative, airline to one that, as Virgin’s founder Sir Richard Branson said, offers “Guests … more choice and control and friendly customer service in an otherwise demoralising commercial airline environment.”

Both carriers have many positive attributes. In addition to an excellent on-time record, Alaska has its innovative 20-minute baggage delivery guarantee. Your loyalty plan, which is the only one among U.S. carriers that still gives credit based on miles flown rather than dollars spent, was ranked No. 1 in a J.D. Power customer satisfaction survey. Virgin America has trendy mood-lit cabins, more comfortable seats, free entertainment options, witty videos, a Branson-esque flare, and both counter staff and in-flight crews who have a bit of fun while doing their jobs.

None of the two carriers' qualities is mutually exclusive. Creativity can co-exist with punctuality. Service can be delivered with a smile.

Branson said he founded Virgin America as well as his other airlines to “[Make] flying … no longer a dreaded chore [but] something to look forward to.” Your company's leaders have been quoted as saying Alaska is "[A]ll about making the travel experience better for our customers." The two companies are already on the same page.

Gentlemen, tap into that understanding. Adopting some of Virgin's positive qualities while maintaining those Alaska already offers would provide passengers with the best of both worlds. The power to make that happen when the two carriers merge is firmly in your hands. Please use it.

The acquisition of Virgin America is expected to close during the fourth quarter of 2017 and the Federal Aviation Administration (FAA) is expected to issue a single operating certificate, allowing the two to operate as a single airline, in early 2018.