What won't fly for the holidays

on December 16, 2015
If you're planning to fly over the holidays just ahead, there are a number of items you should plan on leaving at home.

Hoverboards, which were recently banned by virtually all U.S. airlines, are only the highest-profile item that could bring some Scrooge into your Christmas, so plan thoughtfully when giving gifts or figuring out how to get yours home.

In addition to hoverboards, which aren't allowed on planes either as carry-on items or in checked bags, there are a number of other items that are on the no-fly list. Some items can be transported in checked baggage but not in the cabin while others cannot be put in the cargo hold but are allowed onboard.

E-cigarettes and vaping materials, which are increasingly popular, are allowed in the cabin but not in checked luggage. Alcoholic beverages, if in containers of 100 ml. or less, can be brought onboard while larger bottles must be in checked luggage. However, there are other considerations including the alcohol content.

TSA will allow transportation of alcohol between 24 percent and 70 percent alcohol (48 to 140 proof). Alcohol greater than 140 proof like Everclear or Bacardi 151 cannot be placed in checked luggage. Further, the quantity is limited five liters of alcohol and it must be in a sealable bottle or flask.

TSA's website notes that, "The final decision rests with the TSA officer on whether an item is allowed through the checkpoint."

Even if the gifts you're taking to the kids or grandkids meet all the requirements, it is a good idea to take them unwrapped. If there is any question, TSA officials could make you unwrap them so they can examine them thoroughly, undoing all of Santa's hard work. Instead, take wrapping paper and tape (or purchase some when you arrive) and do the wrapping at your destination. 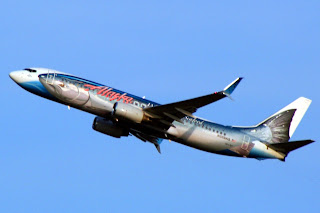 In a preholiday email, Seattle-based Alaska Airlines (NYSE:ALK) pointed out that certain popular gifts that can be transported on its airplanes should be played with far away from airports and airplanes.

Those include drones, which pose a serious concern when flown too close to an airport. Laser pointers were also cited as a potential problem near airports and, the airline pointed out, should never be pointed at a plane. Doing so could temporarily blind the pilot and could earn the person doing the pointing, "Anywhere from a hefty fine to prison time."

Alaska also listed a number of gifts that travel quite well, including cookies, cakes and pies.

"Baked goods are fair game – though it might be tricky to get them to your final destination in their original shapes," the carrier noted. It might also be difficult to get past hungry TSA agents without at least offering them a nibble.

Based in the Northwest where fresh seafood is abundant, the airline also noted that live seafood and fresh fish can also be transported as checked baggage as long as they are packed in leak-proof containers (and Styrofoam doesn't cut it).

Specific to its frequent fliers, Alaska offers its Mileage Plan members the ability to check a case of wine free as long as the wine is from wine regions in Oregon, Eastern Washington and Sonoma County, California.