At what cost Business Class?

on September 01, 2015
I love traveling Business Class. Who wouldn’t? More legroom, better food, better treatment. But those amenities come at an additional cost that varies widely from one airline to the next.

I have written about the Business Class service I have experienced on several airlines, including U.A.E.-headquartered Emirates, Germany’s Lufthansa, Japan’s All Nippon Airways (ANA), Spain’s Iberia Airlines, and U.S.-headquartered American Airlines (NASDAQ:AAL). While I have never been hesitant to spend my accrued airline miles for Business Class passage, in anticipation of the day they will run out and I’ll have to pay cash for that preferential treatment, I decided to do a comparison to find out what airlines charge for Business Class passage as compared to what I only somewhat jokingly refer to as “steerage.”

Obviously, fares vary depending on the city pairs chosen, so I decided to look at the fare difference in terms of a factor rather than dollars. I used 10-day trips leaving from Seattle-Tacoma International Airport (SEA) and New York’s John F. Kennedy International Airport (JFK) on Oct. 10 and returning on Oct. 20. I looked at several city pairs on nine different airlines and found that the premium for riding closer to the front varied from a low of 2.4 times the lowest economy fare to a high of 8.5 times the cheapest passage.

The smallest difference was on IcelandAir, where an economy class ticket from SEA to Oslo, Norway (OSL) with a stopover in Reykjavik (KEF) on the way over cost $1,076. A ticket in Saga Business Class would cost $2,590, or 2.4 times the economy fare. The airline also offers an Economy Comfort fare of $2,120, which is slightly less than double the economy fare. It is also represents the largest price increase over economy seats of those airlines that offer premium economy seating.

Air France has the largest spread between the lowest economy fare and Business Class. Although it flies many codeshare flights with Atlanta-based Delta Air Lines (NYSE:DAL), I was careful to choose a flight from JFK to Paris’ Charles de Gaulle Airport (CDG) that was operated by Air France itself. For that sample flight, the Business Class fare of $6,650 was 8.5 times the lowest economy fare of $782.

British Airways had the second-largest spread between Economy and Business Class. Its $7,805 Business Class fare between SEA and London Heathrow (LHR) was 7.53 times the $1,037 economy fare. The carrier also offered premium economy seating at $2,411 for the trip.

Delta had the third-largest spread, at nearly 6.2 times the lowest economy fare between SEA and CDG. An economy seat was quoted at $1,346 while a Business Class seat as $8,313. Delta’s Comfort+ seats could be booked for an additional $139 over the economy fare, or $1,485 for my sample round trip. 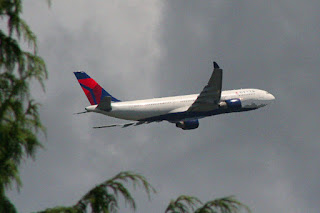 Interestingly, Delta also offers round-trip flights from SEA to JFK for as low as $336 departing the day before and returning the day after my sample trip. A traveler who was so inclined could purchase a round-trip ticket between SEA and JFK, and a second ticket between JFK and CGD and save more than $200 over the $1,346 nonstop fare from SEA to CDG. While there would be a connection, the flight from JFK to CDG would be shorter than flight from SEA-CDG.

Next in line was Emirates, which charged 5.6 times the $1,290 economy class fare to ride in Business Class from SEA to Dubai (DXB): $7,216. Emirates does not offer a premium economy, but it does offer First Class passage …. at a mere $30,856, though the return flight on a Boeing (NYSE:BA) 777-300ER would be in one of eight closed First Class suites. In addition, I should point out that both Business and First Class tickets on Emirates include complimentary chauffer drive service in over 70 cities served by the carrier.

Lufthansa’s Business Class came at slightly more than a five-fold premium: $8,032 for a Business Class ticket compared to $1,565 for economy passage between SEA and Frankfurt (FRA). However, one could upgrade to Premium Economy Basic, with a fare of $1,825.

Chinese carrier Hainan offered Business Class passage at about four times the economy rate: $4,925 between SEA and Shanghai (SHA) compared to $1,220 in the back of the plane.

The most interesting fact emerged when I was comparing tickets between SEA and Tokyo’s Narita Airport (NRT) on code-share partners United (NYSE:UAL) and Japan’s All Nippon Airways (ANA). While one can book the trip through United, travel will be on ANA airliners. Economy class tickets were priced almost identically: $1,600 on United, $1,606 on ANA, which could be attributed to minor fluctuations in the exchange rate between the dollar and the yen. However, while ANA offered its Business Class seats at $5,650, attempting to book a Business Class ticket through the United website returned a fare of $5,940, almost $300 higher for the same class seat on the same airplane.

Booking through the United website did not give the option of choosing a premium economy seat, but booking directly with ANA did, for a fare of $2,745. Although considerably higher than the economy fare, it does buy wider seats and 38 inches of pitch compared to the 31 to 34 inches of pitch in standard economy seats.

The take-away is that prices vary dramatically, and so do the spreads between economy and higher classes. Do your homework to determine the best deal for you.