So it was on the first leg of my return trip from a visit to my company’s headquarters in Tulsa, Oklahoma. Waiting at the gate for the plane that would take me on a 45-minute ride to DFW where I would catch my connecting flight to Seattle, I noticed an unusually large number of ground crew personnel on the tarmac with cameras in hand.  Taking their cue, I got mine ready, too, though I had no idea why.

I soon found out.

When the next American Airlines (NASDAQ:AAL) jet landed, I immediately noticed that it was painted in the new livery the airline had unveiled in January.  But I also thought it looked bigger than the Boeing 757 I was expecting.

Turned out that the commotion was because the incoming flight was the first passenger flight for one of the airline’s brand new Boeing (NYSE:BA) 777-300ERs (extended range). American spokesperson Matt Miller confirmed it was one of the first to sport the new colors.

Triple-sevens, as they’re often called, are generally used for overseas flights, so this would be a treat! 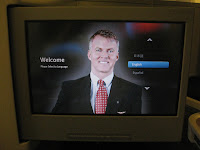 I had chosen seat 7D for the short hop to Dallas, anticipating a standard aisle seat in coach. On the 777, however, seat 7D is in Business Class, so I had a full-sized, lie-flat seat suite to enjoy, however briefly. See the seat map at SeatGuru.com by clicking here.

Other passengers were equally delighted by our collective good fortune, and we were unabashedly excited about all the goodies at our disposal.

Many of us quickly reached for the 15.4-inch touch-screen monitor at each Business Class seat to peruse our entertainment options, which unfortunately were not available during our short puddle-jump. However, the input panel that allows passengers to use the large display instead of their computer screen for working or watching their own videos (lower center of the photo) was the topic of some discussion, as was the hand-held controller (upper right) and the A/C power socket (lower left).

The star of our Business-class cocoon, however, was the lie-flat seat.

Eager to try it out, I hit the “lie flat” button (middle button below the seat icons, with the crescent moon) as soon as we were fully airborne. That single button lowers the seat back and raises the footrest into the precise position for reclining.

As advertised, the seats do lie fully flat, which is not always the case. By contrast, the lie-flat seats on the Iberia Airlines’ A340 that I took from Chicago’s ORD to Madrid’s Barajas Airport (MAD) were considerably less comfortable. Had I a pillow and a blanket on the 777, I could have slept quite well indeed.

The only drawback is that the wide range of seat travel means there is no place for under-seat storage for larger items like laptops. Those have the be stored in the overhead bins and therefore can't be accessed until the captain turns off the seat belt sign. There is, however, ample seat-side storage for smaller items.

The Business Class seats are configured so that two people traveling together can sit together to have a conversation, or share a drink or a meal. The "guest" sits on what is the footrest, and sections of the foldable table can be pulled out between them.

The flight attendants were actually able to complete a beverage service during the short hop, though soft drinks and bottled water were all that was on offer. That was a shame because a proper celebration calls for champagne, and the inaugural passenger flight of this airplane was certainly cause for celebration.

It’s only too bad AA hadn’t chosen DFW-SEA for its shake-down cruise.