on January 20, 2015
Beginning in February, Japan’s All Nippon Airways (ANA) will launch what the carrier is calling “Japan's most comprehensive in-flight entertainment system.”

On the majority of ANA’s international flights, each seat is equipped with a personal monitor, providing on-demand services allowing customers to enjoy their desired content at any time. Beginning in February, the in-flight entertainment guide ‘ANA SKY CHANNEL’ will also be redesigned to allow passengers to view program listings by language of broadcast. 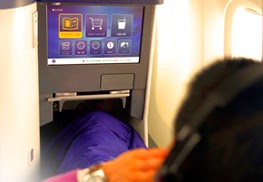 Enhanced options will include 52 movie channels showing the latest Hollywood blockbusters, special features and other films from around the world; 142 video channels covering a wide range of content including original ANA broadcasts, popular television series, sports, music, and children's programs; 148 audio channels covering a selection from the latest hits to old favorites as well as traditional Japanese comedic performances and other entertainment; and nine gaming channels.

The broader selection of content will be offered in 13 languages, with approximately 70 percent of that content available in multiple languages. Those languages include Japanese, English, French, German, Korean, Chinese, Spanish, Portuguese, Italian, Dutch, Thai, Tagalog and Hindi.

The move is “[I]n response to the growing number of international passengers who are choosing to fly with ANA as the airline continues to expand its global flight network and demand for inbound travel to Japan increases,” the airline said in a statement announcing the upgrade. The changes will mean ANA provides more channels, in a greater selection of languages, than any other Japanese airline.

“ANA is committed to ensuring the highest levels of passenger comfort and convenience and improvements to its in-flight services, including entertainment packages, supports this ambition,” the carrier continued. ANA’s excellent customer service has been recognized by the airline rating company SKYTRAX, which has awarded ANA its prestigious 5-star rating. ANA is Japan's only airline to receive this acclaim. More details here.