on March 01, 2019
When I saw the article in Bloomberg News, I almost jumped up, fist-pumped the air, and screamed, “YES!” with all the fervor of a fan whose team had just scored a come-from-behind victory in a game’s final seconds. What was the article about? Putting children in their own section on airplanes.

With the summer travel season just months away, I thought it an appropriate time to revisit this topic. While it may seem odd coming from a father and grandfather, I think separate sections for families with children -- in airplanes and elsewhere -- is a move that is long overdue. In fact, I’ve written about it before. 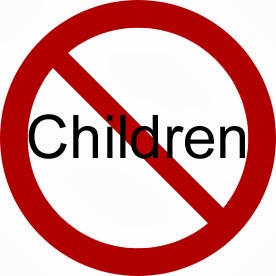 Why? Because today, it’s so much more than a matter of “kids will be kids.” We all understand that; it goes with the territory. But unlike parents a generation ago, today’s parents are more than merely understanding; they’re indulgent. Their little darlings, it seems, can do no wrong, and “Heaven forbid I should stifle little Morgan’s creativity!”

I remember one overnight flight from London (LHR) to San Francisco (SFO), during which one of the kids -- a child of a little over two -- screamed. The. Entire. Flight.

Until the cabin lights came on. Then he was all smiles.

I wanted to wring his chubby little neck, right after I throttled his parents. He’s YOUR kid; figure out a way to keep him quiet. You’re not the only ones on the *&%$#@ plane!

I’ve also editorialized about another annoyance kids often visit upon their fellow passengers: seat kicking. Even if airlines don’t confine families to a certain section, they ought to be firm that kids sit behind their parents, so Mom & Dad can enjoy what the rest of us would just as soon pass upon. As a result of that repeated thumping, the parents might just possibly be motivated to put a stop to it, teaching the kids something about how to behave in public along the way.

I generalize, of course. Not every parent lets their kids rule the roost but too many do, and the rest of us pay the price. Child-free and family-friendly sections would help.

The Bloomberg article only hints at one of the more troublesome realities with the idea: the move toward child-friendly and child-free zones is being led by overseas carriers, which generally offer better service than U.S. carriers in any case. Considering the double whammy of the cavalier attitude most U.S. airlines take toward their main-cabin passengers and the American inclination toward a “me first” mentality, it probably won’t ever happen here. But it should.

Please don’t mistake me for one who hates children; I don’t. And I do understand that “kids will be kids.” It’s just that there’s a time and place for that, and parents need to teach their kids when it’s OK to run around like vilde chayeah and when it’s not. But they don’t, so it falls to others to step in.

Finally, for those (few) of you who may be tempted to comment that my attitude means I’ll end up childless and alone, I am tempted to echo the response Hugh Grant’s character gave to a similar observation in the movie, “About a Boy.”