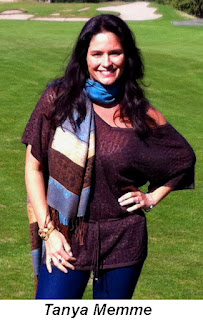 Her new venture is called "Best Vacations in the World" and showcases high-end travel experiences: destinations, as well as ways of getting from here to there.

Travel, she told me during a recent phone call, is a passion of hers. Thanks to the success of "Sell This House!", she's "visited all 50 states and have been lucky enough to travel the world."

Her new show is an outgrowth of that passion, which she intends to indulge to a greater extent in the near future.

She loves writing in a way that doesn't so much offer advice as "takes people along with me" on her journeys and "telling it like it is." She also loves taking pictures of her travels to add an additional dimension to her stories, which she'll soon be publishing on a travel blog she's developing.

For now, though, she'll slake her thirst for travel through her shows.

Because she's Canadian, it was only fitting that Tanya took her "Best Vacations" viewers on a ride through the Canadian Rockies on The Rocky Mountaineer.

Tanya has also taken viewers to Mexico for a vacation in Los Cabos.

Right now, the shows only air on KTLA in the Los Angeles television market, but episodes are also posted on YouTube after they've aired.

They're sponsored by providers at the destinations being featured and offer some beautiful sights -- including, of course, the host herself.