on August 08, 2010
At long last, the date has been set for the grand reopening of London's venerable Savoy Hotel!

The Savoy Hotel will welcome its first guest in nearly three years on October 10, 2010. The most recent guest checked out in December 2007, immediately before the start of a project that was initially expected to take a little more than a year. 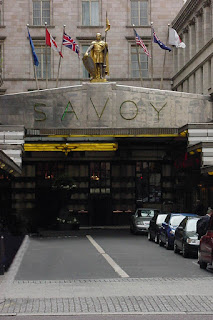 As I reported in my previous post, The Savoy closed at the end of 2007 when its operators embarked on a restoration programme which they knew was "one of the most ambitious undertaken in Britain.” The expectation was to reopen the hotel in the spring of 2009; however, as anyone who has tackled home repairs of any magnitude can confirm, things rarely go precisely as planned.

That is even more true when working with a building more than 120 years old. Workers ran into things that hadn’t been anticipated, and plans had to be modified to fit the newly discovered realities.

Now, though, it appears that the hurdles have been overcome and agents will begin taking room reservations for The Savoy on Tuesday, August 10.

I am excited to see how this grande dame has been restored; I am quite certain it will have been worth the wait!