on November 06, 2009
London’s venerable Savoy Hotel is nearing the end of a restoration program that will have taken more than two years and cost more than £100 million to complete. From the looks of things, it will have been worth the wait.

When The Savoy closed in December 2007, its operators knew they were embarking on “a restoration programme which is one of the most ambitious undertaken in Britain.” The expectation was to reopen the hotel in the spring of 2009; however, as anyone who has tackled home repairs of any magnitude can confirm, things rarely go precisely as planned. That is even more true when working with a building more than 120 years old. Workers ran into things that hadn’t been anticipated, and plans had to be modified to fit the newly discovered realities. 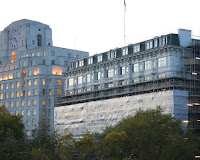 Now – finally – the scaffolding that has hidden this hotel has begun to come down, and a grand reopening is being planned for the spring of 2010, approximately a year beyond the original estimated reopening date.

During a layover on the return trip from my recent visit to Amsterdam, I was fortunate to be able to sit down with Julian Haddon, regional director of sales and marketing, Europe, for Fairmont Hotels, the company that manages The Savoy. Mr. Haddon brought me up to date on the plans and the progress.

The Savoy, opened in 1889, had certainly been updated from time to time over the decades. In 1911, for example, the balconies of the rooms were closed in to make room for the new attraction of en suite bathrooms. No more scuttling down the hall to the loo; it was, after all, the 20th century.

Throughout the remainder of the 20th century, operators of this grande dame periodically “tinkered with” updates and renovations, as Mr. Haddon described it. And while the hotel was always kept in excellent repair, it evolved into something of a hodge-podge. Guests might walk down a hall decorated in the original Edwardian style only to enter a room that had been decorated in art deco. Less than cohesive, less appealing than it might be.

That’s about to change.

This major restoration “has taken The Savoy right back to its core and addressed the infrastructure – the network, the electrical, the water plant, the works,” as Mr. Haddon put it so that, when The Savoy reopens, guests will experience the best of all worlds.

The first thing guests will see is a new, more defined entrance. I sincerely hope they chose to keep the stainless steel art deco canopy that had become the hallmark of the hotel, but I suppose we’ll have to wait and see on that score; at the time of my visit, the entrance was obscured by a banner for the adjacent Savoy Theatre.

In the newly restored front hall, Mr. Haddon says they had hoped to do away with the reception desk altogether in favour of personnel who would greet arriving guests, obtain their names, then escort them directly to their rooms where they’d complete the registration. It won’t be quite like that, but will be much more refined than previously.

The new Thames Foyer will feature a ”winter garden” gazebo built under a glass cupola. Covered for many years but now uncovered and restored, the cupola will allow natural light to fill the room, which will continue to serve as “the heart of the hotel; a sociable spot for light dining” as well as The Savoy’s famous afternoon tea. The Beaufort Bar and the River Restaurant will both be in the art deco style.

The Savoy is definitely not taking a “cookie-cutter” approach to its guest rooms, either. The hotel has 268 rooms but virtually every one is a different size. In fact, Haddon says, there are 14 different room categories determined by size, view, and décor.

Sixty-two suites will be offered at the renovated hotel. The largest, the Royal Suite, is undergoing some £2.5 million of restoration work.

The traditional Edwardian and the art deco room designs that have become so familiar to guests of The Savoy will be coupled with today’s modern conveniences, and presented in a new layout that will feature more distinct areas, each defined by their style. 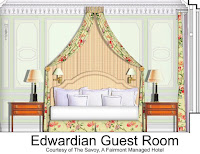 “On the (Thames) river side, it’s classic Edwardian,” Mr. Haddon explains. You’ll walk “down a classic corridor into a classic Edwardian bedroom with bathroom to match.” Previously, it was a “mix-and-match;” you could be walking down an Edwardian corridor and enter an art deco room or vice versa.

The side of the hotel that faces the Strand will be consistently art deco. There will be 98 art deco rooms, many more than previously available.

As you might expect with a project of this magnitude, The Savoy has spared no attention to detail. For example, Mr. Haddon explains, “We’ve kept the moldings, we’ve kept the (built-in) wardrobes and bedroom cabinets, and they’ve been tastefully restored as well.”

Over the years, The Savoy has hosted a wide range of luminaries, from royalty to international celebrities. Her celebrity guests have ranged from Marlon Brando and Marilyn Monroe to Bob Dylan, the Beatles, and more recently, Amy Winehouse.

21st century guests have high expectations, and the newly renovated Savoy intends to deliver. “The luxury traveler today … is not looking for ‘quaint’; he’s looking for efficiency.” As the French poet Arthur Rimbaud said, “Il faut être absolument moderne.” (“One must keep up with the times.”)

“Even though it’s taken longer than we anticipated, the ‘wow factor’ at the end is going to be worth waiting for,” Haddon concluded.

I, for one, am looking forward to seeing it! Oh, and the “stomping”? There WILL be dancing; you can count on it!