on June 26, 2018
Although we’ve been going to Cannon Beach off and on for more than 35 years, this year we made the rookie mistake of going in the summer. Accommodations were hard to find, but we were fortunate to land a queen suite at the Ecola Creek Lodge.

My first impressions upon pulling up were that it was not exactly an easy walk from the main downtown area, and that the exterior was a bit shabby-chic. However, a plaque proclaiming the facility’s historic status helped put that into perspective. 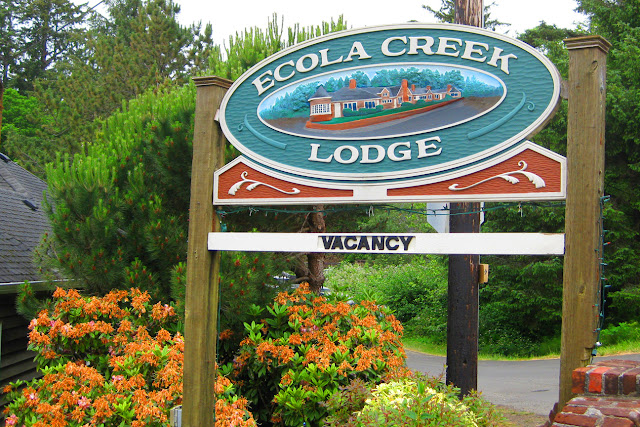 While the hotel that stands there today is not the original, there has been a hotel on that historic site since 1892 when Herbert Logan built the 16-room Elk Creek Hotel. That property marked the end of the rutted and dangerous Seaside-to-Portland toll road. It is also believed that Capt. William Clark and his team camped at that site while trading with the area Indians.

The property that is there today was built in 1946 and was originally called Bell Harbor Lodge.


Its unfinished cedar shingle siding shows the wear from the weather, as do many of the buildings within yards of salt water. Nonetheless, the property and the guest rooms are generally well maintained.

Upon check-in, we were handed our room keys: actual brass keys on plastic fobs of the sort that were common in the ‘60s and ‘70s. If you're "of a certain age," you remember the ones with a return address and directions to “Drop in any mailbox. We guarantee postage.” A throw-back that was absolutely charming!


The property has 22 units and no two are alike. Accommodations range from a smaller “Guest Room for 2” and a “Studio Guest Room” to a family friendly “Two Bedroom Suite with Kitchen and Fireplace.”

Our room was actually best described as a one-bedroom apartment. The living room was about 130 square feet and included a small table, hide-a-bed sofa, mini fridge, microwave, coffee maker, and smaller flat-screen TV with DVD player. Separated by a fairly generous bathroom, the bedroom was just shy of 100 square feet, not counting a sitting area next to the window. It had two small closets and an iron and board.


Included Wi-Fi was pretty decent at 5.3 Mbps download but only 1.2 Mbps upload speed, as measured by Speakeasy.net/speedtest.

While the property is indeed a lodge and not an upscale property, the service was on par with many four- and five-star hotels at which we’ve stayed. On our first morning, we discovered the wall-mounted hairdryer had died. Once I let the office know, a new one was installed within minutes. As an added bonus, the maintenance man recommended a local establishment for breakfast – The Lazy Susan Café – which was absolutely wonderful. Read more about that restaurant in this article.


After breakfast at The Lazy Susan and a stroll around downtown Cannon Beach, we returned to the room about 11:30 to find that it had already been made up. In many places, getting one’s room serviced that promptly doesn’t happen without a special request. High marks there as well.

The Ecola Creek Lodge is a little less than a half-mile from the heart of downtown, which has its pluses and minuses. A plus is that it’s much quieter than properties right in the heart of the action. Minuses include that it’s a pretty stiff walk into the town if you're intent on hoofing it, or that one has to fire up the car, drive in, and then find a parking spot.


There’s no swimming pool on site, but with the ocean so close, who needs one?

The main courtyard has a large deck overlooking a koi pond. A gas barbeque off to the side is available for those who want to do their own grilling as they watch the sunset. And while it doesn’t have a view of the water, it’s close enough that the smell of the sea breeze and the ocean mist are ever-present.

Because of that, air conditioning isn’t really necessary but the rooms come equipped with box fans that can be used to circulate the air as you sleep, clear out a room that has become too warm and stuffy, or both.

It’s more rustic than I generally prefer in my vacation accommodations but, unless that’s a deal-breaker for you, I’d recommend checking out the Ecola Creek Lodge for your next trip to Cannon Beach.

If you find this article helpful, informative and/or entertaining, please consider making a donation via PayPal to help support this private project.