Manchester is one of the UK’s most-visited cities, behind London and Edinburgh, Scotland.

“With our new connection to Manchester and the Condor year-round service from Seattle, it’s never been easier and more affordable for Americans to explore Europe,” Christoph Debus, chief airlines officer, Thomas Cook Group, said. “With seventeen gateways in the U.S., four of which just launched this summer, we’re making excellent progress with our strategy to grow our long-haul network.” 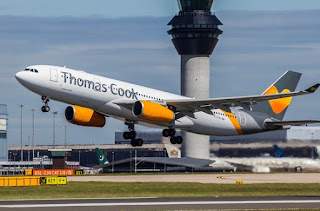 Debus was referring to the Condor service linking SEA to Frankfurt (FRA) and Munich, Germany (MUC), as previously reported by TheTravelPro. Both Condor and Thomas Cook Airline are part of the Thomas Cook Group.

Local officials were equally effusive about the new service.

“As home to the MLS champion soccer team the Sounders, we are proud to now have a direct link to the legendary UK football city and we all know this is a major score for our travelers,” Stephanie Bowman, Port of Seattle Commissioner, said of the new service. “Manchester is more than just sport and this new flight will bring economic benefit to the Pacific Northwest and is another link to a rich area for both tourists and business fliers alike.”

While not among the most rapacious with the levying of so-called à la carte charges, because it is a leisure carrier passengers can anticipate a range of add-on charges, depending on the class of passage they purchase. Baggage limitations will also vary between economy and premium economy.

Limits on carry-on baggage, called “Cabin baggage” by the airline, vary as well. Economy passengers’ carry-on baggage is limited to 6 kgs,, or about 13.2 lbs, while Premium Class passengers are allowed 10 kgs. (22 lbs.).

Economy class passengers can also anticipate paying separately for certain beverages, in-flight entertainment, and for selecting certain seats. The airlines also assesses a credit card fee of two percent of the ticket price, to a maximum of £95 per transaction.

On a more positive note, Thomas Cook Airlines was named No. 6 of the World’s Best Leisure Airlines in the 2017 SKYTRAX World Airline Awards.