Qatar Airways has received the honor of being named the World’s Best Airline in the 2017 Skytrax World Airline Awards, bestowing upon it the title of "World's Best" for six of the past eight years. 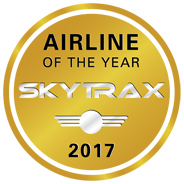 The results of the awards were announced June 20 at the International Paris Air Show at Le Bourget Airport in metropolitan Paris.

“This is an award, not to me, not to my airline, but to my country,” H.E. Mr. Akbar Al Baker, CEO of Qatar Airways, said as he accepted the award.

World's Best Airlines
The rankings, presented by Skytrax, are the result of voting by nearly 20 million airline passengers from around the world who take part each year in what are described as "The Oscars of the aviation industry" and is the world’s largest airline passenger satisfaction survey.

“Skytrax World Airline Awards are coveted quality accolades for the world airline industry,” the organization said on its website. “The World Airline Awards are a global benchmark of airline excellence, and widely known as the Passengers Choice awards.” A total of 105 customer nationalities participated in the survey, which was conducted from August 2016 to May 2017.

A total of 320 airlines were featured in the survey. The complete World's Best list ranks the world's top 100 airlines and is available here.

The highest-ranked U.S. airline on that list was Atlanta-headquartered Delta Air Lines (NYSE:DAL), which rose to No. 32 from No. 35 in 2016 and No. 45 in 2015.  It was followed by Seattle-headquartered Alaska Airlines (NYSE:ALK), which moved up to No. 36 from No. 60 last year and was also voted No. 4 in the Best Regional Airline category. jetBlue (NASDAQ:JBLU) was the third ranked U.S. carrier at No. 39 overall.

Last year's top U.S. airline, Virgin America, dropped to No. 43 from the No. 25 slot last year. Virgin America was purchased by Alaska in a deal announced in early 2016 and consummated in December.

No-frills carrier Southwest Airlines (NYSE:LUV) was voted fifth-best U.S. carrier, rising to No. 54 from No. 67 in the World's Top 100 Airlines. It was also voted No. 9 among the Best Low-Cost Airlines.

Dallas-headquartered American Airlines (NASDAQ:AAL) showed modest improvement, rising to No. 74 from No. 77 in 2016, while beleaguered United Airlines (NYSE:UAL) dropped 10 spots, to No. 78 from No. 68 last year.

Hawaiian Airlines (NYSE:HA) came in at No. 86 while American Eagle was the lowest-rated American carrier at No. 87.

At No. 29 on the World's Top 100 Airlines, Air Canada was also named Best Airline in North America. Its vacation and leisure subsidiary Air Canada Rouge made the list this year at No. 99; last year, it ranked No. 131, well short of the top 100. 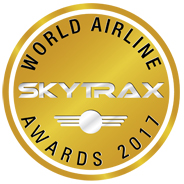