HOUR BY HOUR on the world’s longest passenger flight

on May 03, 2016
I have just completed the world’s longest passenger flight: Emirates Flt. 448 from Dubai (DXB), U.A.E.,  to Auckland, New Zealand (AKL). During the flight, I shared an hour-by-hour recap so that you could come along vicariously.

Launched March 1 by U.A.E.-based Emirates, the route from Dubai to Auckland is 8,825 statute miles, making it the world’s longest passenger flight by distance. My eastbound flight will take 16 hours 5 minutes, according to the airline’s website. The westbound flight from AKL to DXB, which flies into the jet stream, is also the world’s longest passenger flight by duration, with a published en route time of 17 hours 15 minutes.

This morning, the conditions must have been more favorable for a longer route of 8,955 miles but with a “shorter” flying time of 15 hours 10 minutes. Still, more than 15 hours is nothing to take lightly. It is what is called an “ultra-long-haul” flight, which is any flight more than 12 hours in duration. Only a few aircraft can handle routes this long, and the Boeing (NYSE:BA) 777-200LR I am riding in one of them. The Airbus A380-800ULR, which I rode from LAX to DXB, is another.

After acquiring available information and devising strategies for surviving an ultra-long-haul flight, it has now come to the point where I am on board Emirates Flight 448, buckled in, and headed for New Zealand.

After a slight delay because of air traffic, we pushed back from the gate at 10:25 a.m. Dubai time, or 18:25 Auckland time. For sake of simplicity, I will use local time in Auckland for any future references.

Now an hour after take-off, many of us are still getting settled in. We were given New Zealand immigration forms to complete, the very attentive Emirates flight attendants brought us warm nuts and a beverage (I chose a Cloudy Bay New Zealand Sauvignon Blanc), and just took our lunch orders.

In keeping with my vintage, I am listening to a playlist of disco tunes and reminiscing as I enjoy the pampering.

I am surprised by how quickly the first two hours have gone.

We have been served a pre-flight drink, a dinner of mushroom soup, dukkah-crusted lamb and my preferred dessert of cheese and port, and the first two hours have flown by (pardon the pun). But in recalling my doctor's advice to get up and walk once an hour, I realize I have not done so since I buckled myself into Seat 7F well over two hours ago; I've honestly been enjoying the pampering. Well, maybe in the next hour....

It is now 20:25, or 8:25 p.m. at our destination, so still a long time to go. Regardless, our flight attendants Stella, Natalia and purser Mimi are taking excellent care of us and making sure we have everything we need.

As we pass over the southern tip of the Indian peninsula, a couple of things have surprised me about our flight thus far. First, we are only making Mach 0.83, or 83 percent the speed of sound. The 777 should be able to do Mach 0.85 but perhaps the pilot has dialed back to compensate for the 130 knot tailwind. Just like a boat moving with the current, the airspeed is relative to the air and doesn’t take into account how fast that air is moving. And depending on how much time we might gain if traveling at Mach 0.85, we might get into AKL too early. Second, I’m surprised that we are only at 31,000 feet. On the trip from LAX to DXB aboard the A380, we were at 40,000 feet pretty well the entire trip.


But no matter; we’ll get there. Eventually. Now, I have GOT to get up and walk...

With dinner behind us, I can sense we’re settling into a long, quiet period of our flight. Currently over Sri Lanka, we have more than 11 hours to go until we reach Auckland. Time at our destination is now 10:25 p.m. so, to try to stave off as much jet lag as possible, it may be time to try to get some sleep. Fortunately, #Emirates provides mattresses to make our angle-flat seats as comfortable as possible. If you don’t hear from me for a while, that’s likely why…. 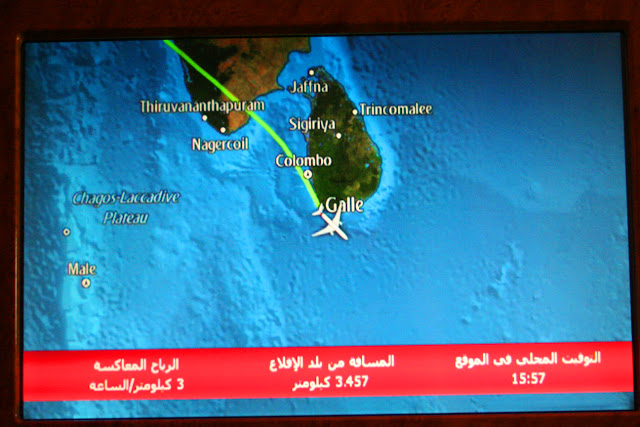 We have headed out over the Indian Ocean and just crossed the equator into the Southern Hemisphere - my first time ever. Can’t wait to see the Southern Cross and hoping weather permits. In looking at the map of the flight path, I am surprised to note that Sydney, Australia and Auckland are two time zones apart. In North America, we often refer to “Australia/New Zealand” as if they were a single country. Clearly, that is not the case!

Managed to get a bit of sleep, which is good, but it is still only about 2:30 a.m. in Auckland so if I can get more, that will probably help with the jet lag. Right now, we are heading southeast toward the West Coast of Australia where we will turn eastward and continue over land in the direction of New Zealand. Still seven and a half hours left before we reach our destination.

Connecting to post the last couple of updates reminds me of the ‘90s and dial-up with AOL. I don’t know whether that is because we were over water and relied solely on a satellite connection instead of a mix of satellite and ground connections or because many of my fellow passengers are also on-line. Now, as we are just about to cross the West Coast of Australia, connectivity is much improved.

I was rather surprised when I realized that, between eating dinner, writing a few updates and getting a bit of shut-eye that I really haven’t even begun to explore the numerous entertainment options of Emirates’ ICE system. Maybe during the next hour, I’ll do that and find a movie to occupy my time. I will also get up and walk some more, something I haven’t done in a while. We now have six and a half hours before we reach Auckland. 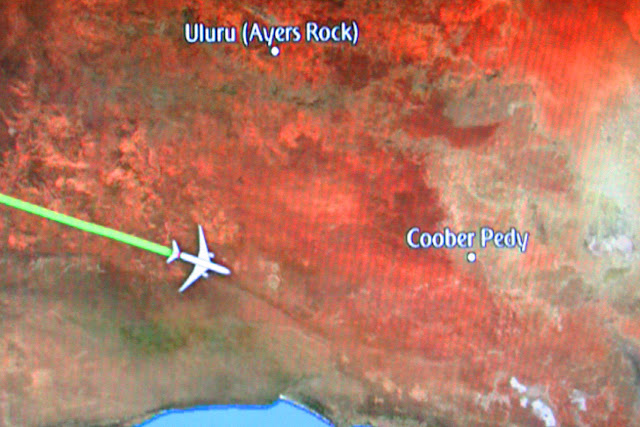 Managed to catch a little more sleep, so I may be able to make it through my first day in Auckland without much difficulty. Passing south of Ayers Rock and coming up on Coober Pedy, famous for its opals. Good thing I’m 35,000 feet above it or my bride would insist that I bring some home!

Still haven't explored the entertainment options beyond listening to Sade and the disco mix I mentioned earlier. I find it much more enjoyable to nap, write, and take advantage of an offer to stretch out and experience one of the enclosed First Class Suites (!), though I didn't get to stay more than a few minutes.

Twelve hours down, three and a half to go as we pass north of Adelaide. Spent a good portion of the past hour standing in the galley, chatting with a flight attendant who not only loves his job but is also a fellow aviation geek. I’m always pleasantly surprised at the number of really interesting, genuinely nice people I meet when I travel. I am certain that is part of the reason I enjoy it so much.

Meantime, there are dead zones for internet connection in the sky just as on the ground. Have been out of touch for a time; hence the tardiness of this update.

Entering the 14th hour of the world’s longest passenger flight and am nowhere near going stir-crazy. In fact, it has been far easier than I even anticipated. I have been busy writing, photographing, talking with fellow passengers and crew as well as posting, and I have to believe that is the best way to make the time pass: have something to do, being sure to balance that with sleep and getting up to stretch those legs. But something on which to focus is vital.

Of course, we are not “there yet”. As we pass over Sydney, the in-flight display says we still have two and a half hours to go. But compared to the time that has already passed, that should be a walk in the park.

With 14 hours behind us and an hour and a half to go, we are half way across the Tasman Sea, my fellow passengers who have been sleeping more than I are starting to rouse, and the flight attendants are preparing our breakfast. Local time at our destination is about 8:25 a.m., meaning we have about 1:30 to go. I’m actually starting to wish the flight could go on a little while longer. But I’m probably the only one…

At the beginning, I noted that the onboard display said our flight should take about 15 hours 10 minutes. Based on the time we pushed back from the gate and the current estimated arrival time, it appears the total en route time will be closer to 15 hours 30 minutes; not a record but a darned long flight. My glutes will be glad to get a rest.

We landed as planned and arrived at our gate at AKL spot on 11:00 a.m., making our "block-to-block" time 15 hours 35 minutes. Not a record per se but certainly a personal best. Thank you, Emirates, for making it such a pleasant trip.

Emirates provided my air travel so that I could experience various aspects of its service first-hand.