on May 03, 2016
I had seen the Airbus A380 a few times before, parked on the ramp across an airport and taking off on a runway in the distance but I had never seen one up close. Until now.

When I walked into the waiting area for my flight aboard an Emirates A380 from Los Angeles International Airport (LAX) to Dubai, U.A.E. (DXB) and saw the plane through the window of the terminal, my first thought was, “That is one HUGE aircraft!”


That was immediately followed by a thought uncharacteristic for someone who has 3,500 hours in his pilot’s log book: “Something that big should not be able to fly.”

But they have been flying, with only a single incident that was related to an engine failure, for nearly nine years. The first A380 to carry passengers was operated by Singapore Airlines and flew in October 2007.

Geeking out over the A380

In fact, there are only two aircraft in existence with larger wingspans than the A380: the Antonov An-225 Mriya, a strategic cargo lift aircraft built in the Soviet Union and the Spruce Goose, Howard Hughes’ gargantuan wooden float plane. The Mryia, which is Ukrainian for “dream,” has a wingspan of 290 feet while the Spruce Goose has a wingspan of 320 feet. But only one Mriya was ever completed and the Spruce Goose only made one short flight; today, it is on display at the Evergreen Aviation and Space Museum in McMinnville, Ore. 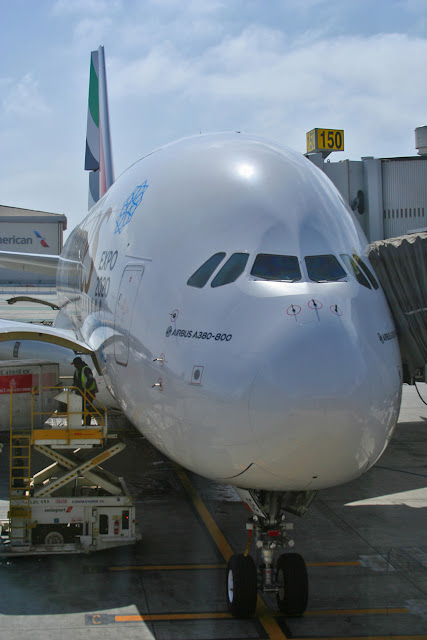 Unless you frequently fly in and out of some of North America’s very large airports, you may never have seen an A380 in person and, unless you have taken a long-haul or ultra-long-haul flight to a destination that has another very large airport, it is perhaps even less likely that you’ve ever flown on one.

Because of the aircraft’s size, the number of airports at which it can operate is limited, primarily by its wingspan. At just short of a football field the long wingspan means that, at many airports, other aircraft cannot operate at the same time as the A380 and maintain an adequate safety margin.

To accommodate an A380, many airports would have to close adjacent runways while the A380 was taxiing into position, then close the adjacent taxiways while the plane was on the runway. If you’ve ever seen the line of jets on a taxiway waiting to take off during an airport rush hour, you can imagine how significant the delays would be if all those other planes had to wait at their gates until an A380 completed its operations.

Although I had seen them on the ground at San Francisco International Airport (SFO) and taking off at LAX, I had not had the experience of flying in one.

Heading toward the aircraft during the boarding process, one really gets a sense of how massive the plane is. For my flight, economy-class passengers boarded directly from the gate via jetways on the same level as the lower deck. First and business-class passengers, whose seats were on the upper deck, had to take an escalator to the second level before walking down a jetway to the top of the two-decker aircraft.

Upon entering the upper deck of the Emirates A380, the airplane felt little different than any wide-bodied jet like the Boeing 777 and gave no hint that there was another deck of essentially the same size directly underneath.

It seems that the A380 may have been deliberately designed to give each deck the feel of exclusivity. Unlike the 747, where the staircase that connects its two floors is readily visible toward the front of the plane, the stairway connecting the two levels on the A380 is tucked discreetly behind the flight attendants’ galley and prep station at the rear of the aircraft on the upper deck.

Settling into my seat, I was able to see outside the aircraft through my window and from the front in something approaching the pilots’ perspective, thanks to a function called FlightView. That enables passengers to, among other things, look outside the airplane via three cameras mounted on the aircraft’s tail, near the nose looking forward and looking down.

When it came time to take off, the size of the A380 once again became apparent. Looking at the FlightView screens as we were taxiing, the planes in line ahead of us looked like miniature model airplanes.

The beginning of the take-off roll gave more testimony to the size of the beast. As the four Rolls-Royce Trent 900 engines roared to life, the plane seemed to shudder before starting to move forward and when it did, it seemed to accelerate much more slowly than other planes. Nonetheless, it reached V2 – the aircraft's safe take-off speed - with about 2,000 feet of our 11,090-foot runway 25L remaining.

While I was initially surprised by the A380’s take-off performance some additional research showed that, despite its size, its take-off and landing speeds are actually about 20 knots slower than other heavy jets, like the Boeing 777. Nonetheless its cruising speed is comparable, at 0.85 Mach, or 85 percent of the speed of sound.

In July, Emirates will add a second daily flight on the route connecting LAX and DXB and, as with the existing flight, will operate an A380 on the route, bringing the total of A380 flights from the U.S. West Coast to three each day. Emirates also operates the A380 on routes between Dallas-Ft. Worth (DFW), Houston's George Bush Intercontinental Airport (IAH), New York's John F. Kennedy International (JFK) and Dubai in addition to the route between JFK and Milan, Italy’s Malpensa International Airport (MXP).

Emirates provided my flight so that I could experience the A380 and various aspects of its service.

Originally published on May 3, this article was updated on June 21.