on April 28, 2016
Many of the world’s airlines, including Virgin America, have put in place a new way to earn additional ancillary revenue dollars: putting unfilled premium seats up for bid.

Five days before my Virgin America (NASDAQ:VA) flight to Los Angeles International Airport (LAX)  – almost to the minute – I received an email with the following message:

“Make a move to Main Cabin Select,” the communiqué said in its heading. ”It’s time to take it up a notch. Just submit your offer for a chance to be upgraded on your Virgin America flight.” 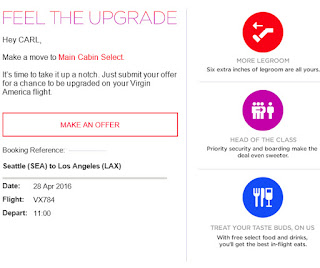 The text was followed by a box I could click on “Make an offer.”

In the case of Virgin America, Main Cabin Select gets more than six inches of extra legroom. It also includes priority security screening (which I already get by virtue of being a Global Entry member), a free checked bag, complimentary entertainment and premium snacks and beverage.

Although I think Virgin America’s regular economy is perfectly adequate for the two and a half hour flight, I clicked on the link to see what came next.

I was presented with a slider that I could move to offer anywhere from $40 to $65 to bid on an upgrade. Because I will be checking a bag for this trip, which costs $25 for Virgin America's main cabin passengers, I decided I was willing to risk spending an additional $25 and bid $50.

After I placed the bid, I logged on to Virgin America’s web site and saw that nine of the 12 Main Cabin Select seats on my flight were still available.

A couple of days later, I received an email stating that my bid did not win an upgraded seat. OK; that's the way things break. But here's the odd part: When I checked in online the day before my flight, I was offered the opportunity to upgrade to Main Cabin Select - for $39. I took it, but also asked Virgin's PR people to explain why my bid of 50 for an upgrade was turned down but I could still buy an upgrade for $39.

As it turns out, Virgin America only offers a limited number of seats for bid through its "Plusgrade" program and leaves others available for members of its frequent flier program, Elevate.

"[W]e ... want to ensure that we protect the perks of our most loyal guests, which is why with Plusgrade we always hold some seats for our Elevate members who may also be looking for an upgrade," Dave Arnold, a Virgin American spokesperson, told me.

That approach likely insulates Virgin America from the criticism leveled at other airlines around the world by their elite members who are accustomed to using their accrued miles to score better seats. Many of those airlines' passengers view the practice as the airline selling off their “right” to a better seat and see the auctions as eroding the value of their miles, according to comments posted on a variety of airline and air travel-related chat boards.

To date, few U.S. airlines have adopted the program. According to one website, American Airlines (NASDAQ:AAL) began offering such a program in March 2013 but it has since faded away quietly. Delta Air Lines (NYSE:DAL) and United Airlines (NYSE:UAL) do not appear to offer such a program.

Initially, I had the same objection as other top-tier frequent fliers (though I am not one on Virgin) and opined that Alaska Airlines (NYSE:ALK) should not adopt the practice if its proposed acquisition of Virgin America is consummated. However, Virgin seems to have found the middle ground, so I am comfortable adding this to the list of the many things to like about Virgin’s operations - things that Brad Tilden, Alaksa’s CEO, should consider incorporating when the two carriers combine.

Originally published on April 25, this post was updated April 28 to include new information.