The last of three jets to be decorated in Star Wars livery for Japans' All Nippon Airways (ANA) has completed its inaugural flight, flying from Japan to Los Angeles International Airport (LAX). 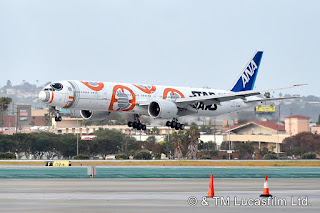 Part of the ANA Star Wars Project announced in April 2015, the Boeing (NYSE:BA) 777-300ER is decorated with a special livery featuring the new character BB-8, which debuted in the movie Star Wars: The Force Awakens. 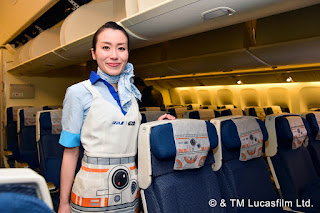 In addition to its livery, the interior of the aircraft also sports a BB-8 theme. Passengers will experience the world of Star Wars with specially-designed BB-8 paper cups and headrest covers and cabin attendants wear BB-8 aprons. On the R2-D2 ANA Dreamliner, which debuted at Boeing’s plant in Everett, Wash., on Sept. 12, 2015, cabin attendants wear R2-D2 aprons.