on October 29, 2015
Dallas-Ft. Worth-based American Airlines has declared that its merger with US Airways has been completed and the two are now operating as a single entity.

The announcement came in an Oct. 29 email sent by American’s (NYSE:AAL) chairman and CEO Doug Parker to members of the airline’s AAdvantage frequent flier program. 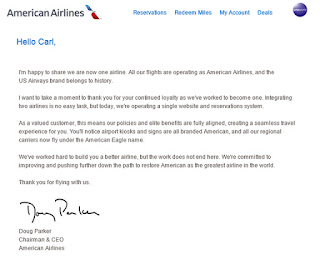 “All our flights are operating as American Airlines,” Parker wrote, noting that “the US Airways brand belongs to history.”

The announcement marked the end of a lengthy process that started when the merger officially closed on Dec. 9, 2013.

However, Parker acknowledged that reaching the milestone of operating as a single entity does not mean their work is done.

“We’re committed to improving and pushing further down the path to restore American as the greatest airline in the world,” he said in the penultimate paragraph of his email.

Parker clearly has his work cut out for him. In the 2015 Skytrax World Airline Awards category of the 100 “World’s Best Airlines,” American was ranked No. 79 by passengers participating in the annual survey, last among the big three U.S. carriers. Delta Air Lines (NYSE:DAL) was No. 45 and United Airlines (NYSE:UAL) was No. 60.

A word of advice from someone whose first flight was on American and who has flown your carrier for more than half a century: Focus on customer service. Only by differentiating yourselves by the way you treat your passengers will you have any hope of reaching your worthy, but lofty, goal of becoming “the greatest airline in the world.”

That said, I sincerely wish American the best.