on August 18, 2022
If you think you know Polish cuisine, you’re probably thinking of things like gołąbki, pierogi, kapusta, kielbasa and many of the other delightful dishes our babcie used to make. And you wouldn’t be wrong. But in the 21st century, you’re not completely right either.

These days, people think little of crossing most international borders, particularly those within the European Union. Stateside, I've gone from my home near to Seattle to Vancouver, BC for lunch, and here in the EU, its not unheard of to travel across two borders for that midday meal. And when people decide to move across a border – slightly more complicated but done fairly frequently nonetheless – their foods come with them.

Add to that the exposure to new, creative cuisines brought by food TV shows, and a country’s culinary repertoire expands exponentially. At least that’s what I’m finding a little more than a week into my stay in Krakow.

My first stop was for pierogi. I’ve never found one exactly the same as my babcia used to make, but it’s become apparent that she was putting her own spin on things. The pierogi she made were the traditional Pierogi Ruskie (currently being called Pierogi Ukraine because of the ongoing war with Russia), but with a large package of Philadelphia Cream Cheese added to the mix. It gave the filling an extra tang that simply doesn’t exist in the traditional recipe, and while slathering Pierogi Ruskie/Ukraine with sour cream helps, they’re still not exactly the same.

No matter. There’s plenty of good food to be had, and I had some very good pierogi at a place called Pryzstanek Pierogarnia or Pierogi Stop (as in “station”). A little hole in the wall, it was recommended to me by an expat American who has made her home in Krakow for the past 10 years, teaching English as a Second Language. I had four pierogi, two gołąbki and a bottled water for about 30 PLN with tip, or less than US$7. A filling lunch at a bargain price.

I thought the gołąbki were a bit bland, but no matter. My next stop for traditional Polish was, oddly enough, at Restauracja Polakowski in a large shopping mall (or Centrum Handlowe) a 15-minute walk from my hotel. The presentation, on Polish-themed china, was much more authentic than the paper plates of the previous place, but the gołąbki still lacked the punch I was craving. But again, Grandma probably put her own spin on things, and that’s what I’m used to. (Two gołąbki with tomato sauce: 26 PLN, or less than US$6.50).
Moving away from the expected these days is easy. In that same mall with the traditional restauracja were the ubiquitous McDonald’s and Pizza Hut, frozen yoghurt stands, a fine-dining establishment called Sphinx featuring local chef Tom Maltom, and a variety of food carts outside the front entrances.
Across the main street call the al. Pokoju was another traditional restaurant called the Pod Jabłonia. Its lunch menu offered pierogi (though the English menu used the rather bland word “dumpling”), pizzas and a variety of appetizers in addition to beer and wine.

I opted for deep fried chicken wings with Louisiana hot sauce (Buffalo sauce was not on offer) and a beer. The wings were nicely spicy and the beer cooled things off well. Who’d have thought that hot wings could be considered Polish food? (A dozen wings and a beer: 56 PL with tip, or a little more than US$11.)

An afternoon venture into the Stare Miasto (Old Town) introduced me to another aspect of today’s Polish cuisine. At a place called Nami Beef and Reef, I enjoyed appetizers of langoustine ceviche, beef and foie gras gyoza, and a nice semi-sweet Rosé from France. Taking advantage of the warm, sunny afternoon and dining at a table set up on a sidewalk, it was adventuresome, yet relaxing at the same time.
The total for two apps, two glasses of wine and an automatic 12.5% service charge : 153 PLN, less than US$33.  This restaurant was the only one I've been to so far that adds an automatic gratuity. Most of the places I've been to don't even give you the option of adding it to your credit card charge. If you want to tip (and I believe you should), leave cash.
As my time in Krakow drew short, I sought out a French brasserie that was recommended to me. Rather interestingly, the ZaKładka -Bistro de Cracovie was located on the south bank of the Vistula River in the Jewish Ghetto. 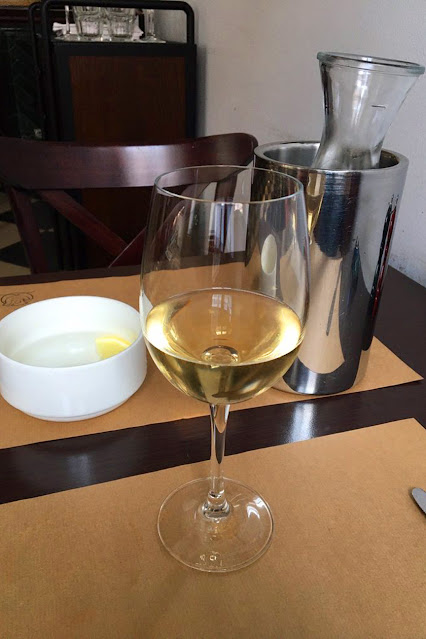 Their menu stated the mussels were delivered on Thursdays so shellfish fans needed to plan accordingly.  I did. 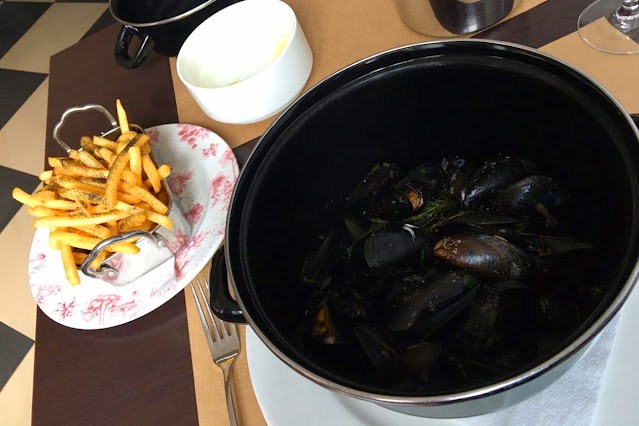 Along with a half-litre of an Italian Pinot Grigio, I was a happy guy! I wish I'd had room for more, like the honey melon & Rosette de Lyon or the beef tartare. Or any of the "sweet endings" like the mascarpone & summer fruits mousse.
The service was very good; the laid-back European approach but with my server making herself visible if I needed anything. All I had to do was smile and she was right over
What’s next? Who knows? But a couple of things are certain: there’s much to be enjoyed beyond what we used to think of as Polish food, and as soon as you think you have it figured out, something new will pop up.
Stay open, and stay hungry!