on August 17, 2022
When I landed in Poland after flying German carrier Lufthansa from Seattle, my first thought was, “For the first time in all my years of flying, I regret choosing a European-flagged carrier over an American airline.”

It took a while to figure out why I felt so let down by Lufthansa. After all, they’re not doing anything that isn’t being done by literally dozens of other airlines. But that actually is the crux of my complaint: I expected better of the carrier that had previously been a leader, not a follower.

I chose Lufthansa for my flights from Seattle through Frankfurt and on to Krakow based on some very pleasant previous experiences, even in the economy cabin. But that was pre-pandemic. Now it seems this once-laudable carrier, which had been among the world's top-ranked airlines*, has fallen into lock-step with the rest of the industry and has become intent on wringing every possible dollar from its customers while delivering the absolute minimum in terms of space and service, at least as far as the so-called “Main Cabin” passengers are concerned.
TOO MANY OPTIONS, TOO FEW REAL CHOICES

Like many carriers, Lufthansa offers several different fare options within each fare class. For my flights from Seattle to Frankfurt and on to Krakow, I booked seats in standard economy and had to choose between Economy Light, Economy Basic, Economy Basic Plus, and Economy Flex fares. Each has its own set of restrictions regarding rebooking and refunds, whether they're even possible and whether there is a charge.

I was then given the "choice" of paying to book my seats in advace. The “preferred” seat I chose for the trans-Atlantic segments cost an additional $60 each way, for a total of $120. Seats from Frankfurt to Krakow were another $14 each way. Other seats were more expensive than those I chose, some were less. Those who don't want to pay for the privilege take potluck from whatever seats are available at check-in, which could mean being stuck in a middle seat. For the 10+ hour trans-Atlantic flight, that was simply not an option.

My outbound seat aboard the aging 747-400 was among the narrowest in the industry today. According to SeatGuru.com, seat 52H was 17.1 inches wide, even narrower than ultra-economy carrier Spirit (NYSE:SAVE), where seats are 17.75 wide at a minimum. It came with a 31-inch pitch, which is about the shortest my 6-foot frame can abide. Because the middle seat was empty, I was able to raise the armrest next to me to get a little extra space but when the passenger in front of me reclined, my TV screen came uncomfortably close.

Premium Economy would have given me a seat 19 inches wide with pitch of 38 inches – two inches more width and a full seven inches more legroom. Taking advantage of the upgrade offer at check-in would have added an additional $430 to my cost for the one-way SEA-FRA leg.
For that leg, Lufthansa boasted of “complimentary in-flight internet access through FlyNet,” but it ultimately failed to deliver. Although I was able to technically “connect” according to my devices, the throughput was so slow that I was never able to reach any web site, rendering it useless.

The food in economy, as one might expect, was only so-so. The hot dinner of tortellini in no way reflected the German atmosphere I’d anticipated, and the cold vegetable sandwich offered for breakfast? Totally unappealing.
Beer and wine were complimentary, as they have been on long-haul flights for years, but other adult beverages in economy now carry charges of €7, as one flight attendant explained apologetically when I asked for a scotch on the rocks.

That particular F/A and another gentleman were quite gracious, chatting with me a bit, answering some questions, and making me feel welcome but the others? Once dinner service was complete, there was a veritable stampede to their crew rest compartment above the aft lavatories. The flight attendants' primary role is to ensure the safety of the passengers. How can they do that effectively when most of them are sequestered in their crew rest compartment?
The Krakow-Frankfurt leg of my return trip brought another surprise. For this short-haul flight, Lufthansa used an Airbus A320 NEO. Sliding into my seat, it felt a little tight. The 18-inch seat width was fine but the pitch was a mere 30 inches and the seats did not recline. Fortunately, it was a short flight – less than 1.5 hours.
A TALE OF TWO AIRLINES

For the return trip from FRA-SEA, I decided not to shoehorn myself into a too-small seat or endure indifferent service. I upgraded to Business Class at a cost of $570.

The stark contrast made it feel like I was flying on a completely different airline.

Of course, there is more space in Business Class, and more amenities as well. Instead of having to use my own earbuds, seats were equipped with AKG noise-cancelling headphones, which were very effective at cancelling ambient noise but not as comfortable as the Sennheiser phones that were the standard last time I took Lufthansa Business Class.

There is also a better selection of food, more complimentary beverages, and much better service. Passengers – whom the flight attendants addressed by name – had a choice of two appetizers, three entrees and two desserts for our first meal, then two entrees and a dessert for our “before landing” meal. Beverages included beer and wine, Heidsieck Monopole Blue Top champagne, various spirits, coffee, tea and soft drinks.
More space and better food are nice, of course, but service is the most important differentiator. Being called by name, being checked up upon to be sure all was well, being told we could visit the galley or ring the service button if we needed anything, being asked at the end of the flight if we had a good trip. These and other examples of good service are what makes people feel like valued guests instead of just paying customers. Good service is what made me a fan of Lufthansa in the first place.
CUSTOMERS AS CASH COWS

Lufthansa seems to have succumbed to the mediocrity that afflicts most of today’s airline industry and adopted some of the practices most despised by airline passengers. Nickel-and-dime charges for choosing your seat in advance, internet access that may or may not be included, and multiple fare choices that often make little to no sense, like the fares below. As the screen shot shows, while the purchaser of a Business Basic Plus fare would be charged a US$900 fee for a refund, one who purchases the Business Flex Fare would NOT be charged a fee. However, THE FARES ARE IDENTICAL! 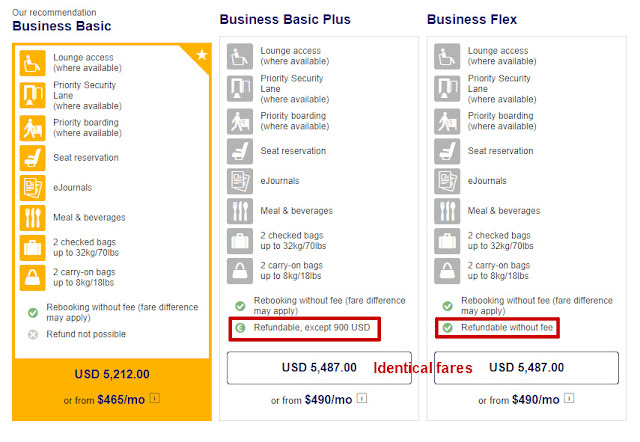 And then there is the charade surrounding paid upgrades. "Depending on the load factor of a particular flight," according to a Lufthansa spokesperson, a traveler may be offered the option of “bidding” on an upgrade more than three days before their flight. Then, the airline says it will evaluate their bid and notify the traveler 72 hours before departure if the bid has been accepted. But let’s get serious, shall we? The airline has the data and can tell pretty closely how many people will buy an upgrade when the price becomes fixed at 72 hours before departure. Do you really think it will accept a bid LOWER THAN its fixed charge? Highly doubtful. So why are you playing this shell game with your passengers?

The fares too are something of a shell game. The economy fare for the route I took was $1,663 plus additional charges for seat selection. If I upgraded to Business Class near the time of check-in at a cost of $570 each way, that would have increased the fare to $2,803, a dramatic savings over the $10,991 Business Class fare quoted if I’d selected Business Class at the outset. Of course, there is the risk that there will not be seats available for an upgrade, either to Business or Premium Economy, but if there are the savings would be substantial.
MY COMPLAINTS

Many of my issues with Lufthansa mirror my issues with the industry as a whole:
And one issue specific to Lufthansa:
THE BOTTOM LINE
Getting a pleasant flight at a reasonable price has become more difficult than it has ever been. The fact that travelers have to drill down on things like seat width and pitch before making a decision on which airline to book; compare confusing fares and calculate the total cost when seat selection, checked baggage, and more "ancillary charges" are included; and are ignored by the majority of flight attendants makes me angry at the industry as a whole. But I’m not surprised.

Sadly, as cruise line Cunard used to say in its advertising, getting there is no longer “half the fun.”
Visit my main page at TheTravelPro.us for more news, reviews, and personal observations on the world of upmarket travel.
Photos by Carl Dombek
Click on photos to view larger images
@Lufthansa_de
@LufthansaUSA
NOTES:
* – Lufthansa ranked in the Top 10 of the World’s Top 100 Airlines in the annual SkyTrax Airline Awards in 2016 – 2019. The awards were not held in 2020 due to the pandemic, but in 2021 the carrier had slipped to No. 13, and its accolades were for its First Class Lounge and First Class On-board catering. Interestingly, although the carrier has wide-body planes in 14 different configurations, only six of those configurations even have First Class sections.