on February 03, 2022
"Sights Worth Seeing" focuses on places that are not "typical" travel destinations but are largely undiscovered gems with much to offer.
The Finger Lakes region of southern New York is a popular destination for outdoor sports, wine tasting and other activities but just a short distance away is another spot worth seeing: the town of Corning.

If the name sounds familiar, it should. The town of Corning, just off Interstate 86, is home to the world headquarters of Corning, Inc., the famous glass manufacturer. And while the company has a direct and distinct influence of the area, don’t be too quick to dismiss this town of about 6,000 people as “just a company town.” Corning has a lot to offer.

When I visited, my hotel was literally in the shadow of the company’s historic tower nicknamed Little Joe. However, my first experiences in town were along Market Street in the historic district, officially called The Gaffer District in honor of the highly skilled glass-blowing artisans called “gaffers” who create unique blown-glass pieces.

In search of a nice dinner, I bundled up, braved sub-freezing temperatures, and walked about 0.7 miles to a restaurant named The Cellar. Not only did it have good reviews on social media, a couple of locals I spoke to also recommended it highly.

Billing itself as a “modern fusion restaurant,” the menu was quite varied and provided lots of options. Not in the mood for a full dinner, I chose a couple of appetizers: lamb lollipops and poutine.

Three little lamb chops came out perfectly rare (per my request), covered in demi glaze, with a dollop of chevre, crispy prosciutto, and a sprig of mint. The poutine was, well, HUGE. I had to confirm with my server that it was indeed the “small” serving. Prepared with local cheese curd, wagyu tallow fries, and au poivre, it was tasty but not the best rendering of that dish I’ve ever had. If you’ve had poutine in Canada, you’ve likely been spoiled. If not, and if this preparation sounds appealing, go for it.

For breakfast, I popped into Poppleton Bakery. They have pastries, breakfast crepes and breakfast bagel or croissant sammies. The bagel with egg, ham and cheese was freshly prepared, dripping with butter, and oh, so tasty!

In search of a fast, inexpensive lunch but wanting to avoid the big national fast-food chains, I ventured out to Aniello’s Pizzeria, a local haunt with generous slices of cheese pizza for $2; $2.50 if you want one with a topping. And even if you’re having a late afternoon bite, they will likely have several varieties prepared and ready to go by the slice. If you don’t see exactly what you want, you can customize a slice for a modest 25 cents per additional ingredient.

Later in my stay, another local recommended Three Birds Restaurant. Again, I didn’t get past the appetizers, but was thoroughly satisfied. I enjoyed a cup of the Three Birds Harbor Fish Soup: lobster broth with a variety of seafood. While reminiscent of a chowder, the lobster broth is clear, not creamy, keeping the soup quite light. I followed soup with a salad of baby greens. A very convivial bar, great food, reasonable prices and friendly locals. What more can you ask for?

No matter what your dining preferences, there are many restaurants open on Market Street, from brew pubs to family fare, cheap to not-so-much. It’s encouraging to see that so many are surviving the ravages of the COVID restrictions.

In addition to boasting several good restaurants and numerous shops – both glass-themed and otherwise -- the Town of Corning is also the home of Corning, Inc.’s world headquarters, and the 196-foot tower nicknamed “Little Joe” which dominates the skyline. 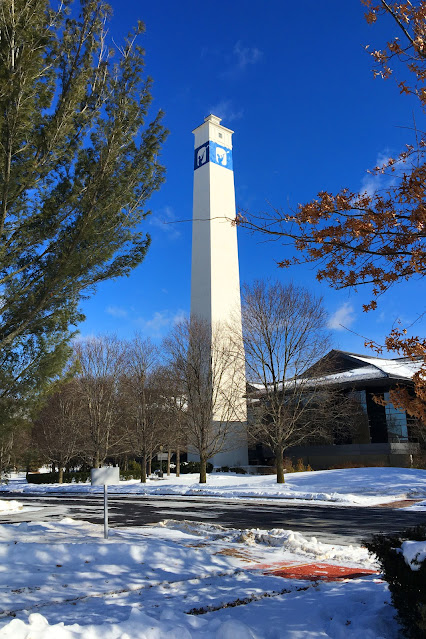 The tower, built in 1912, was designed to produce thermometers through a process called “vertical draw.” Molten glass was pulled to the top of the tower where gravity extruded it before it was precision cut to the proper length. The vertical draw has since been replaced by the horizontal draw, but Corning literature claims that Little Joe – with a statue of a gaffer at its base -- is the only vertical draw tower in the world.
If you’re a light sleeper, you’ll want to find a hotel away from the historic district because, as it has done for over 100 years, Corning blows a steam whistle eight times a day, six days a week. The whistle goes off at 6:45 and 7 a.m.; 7:45 and 8 a.m.; noon, 12:45 and 1 p.m.; and 5 p.m. The times correspond to different events in the workday: starting of two shifts at 7 and 8 with 15-minute warnings for each; lunch with a 15-minute warning that lunch hour is drawing to a close; and quitting time.
The whistle is located at the Corning Power Plant on Museum Way, across from the Corning Museum of Glass. Visitors can pull into the parking lot for an up-close view, like this one:


In addition to Little Joe and the steam whistle, the company hosts the Corning Museum of Glass. The museum has a little bit of everything glass-related: art and design, science & technology, history, and glass-working demonstrations. When you’ve been making glass products since 1851, there’s a lot to history to be represented. 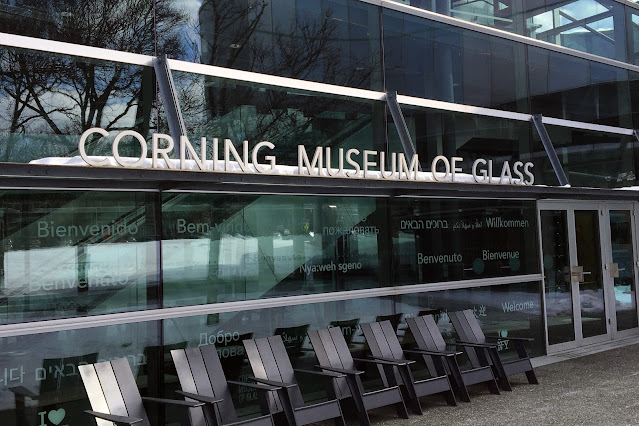 And that may be both a blessing and a curse.

The Museum of Glass is quite doable in terms of size, but in terms of topics, visitors may want to choose a specific area to explore.

After purchasing their ticket, visitors are directed to enter one of the galleries: either the Contemporary Art & Design gallery or the Gather Galley. When I visited, its exhibit was “Fire and Vine: The Story of Glass and Wine.” The pivotal point was that wine has been associated with glass for centuries, and in the current century touches glass at almost every point in its production.

Farther along was another gallery with rotating exhibits. The focus during my visit was on glass in history and was called “35 Centuries of Glass,” with displays ranging from ancient times to contemporary producers including Tiffany.

With an affinity for science, I headed for the third floor and the innovation center. There, I encountered exhibits showing how bottles were made centuries ago and how they’re made today, how Corelle (now 50 years old!) was developed, how a Corning researcher named Donald Stookey accidentally stumbled upon glass-ceramic, which became known as Corningware. There was also a glass-breaking demonstration using tempered glass (spoiler alert: it DOESN’T!), exhibits showing how laminated windshields were developed and demonstrations of their strength, glass used in high-end optics like the world’s largest telescope mirror, and more. 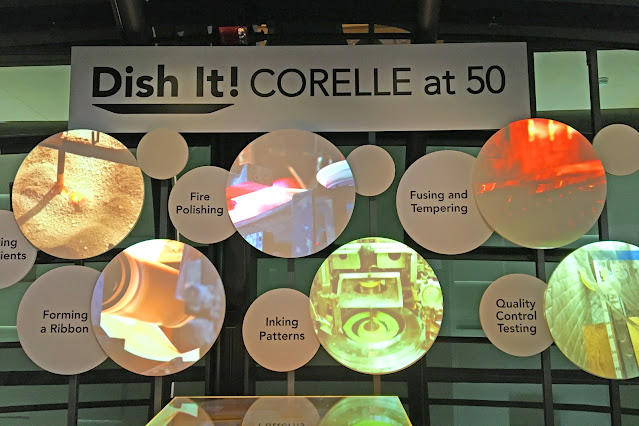 Of course, there are also demonstrations of glass blowing and flame-working. And when weather permits, visitors can also make their own glass creations (for an additional fee) at an outdoor glass studio. 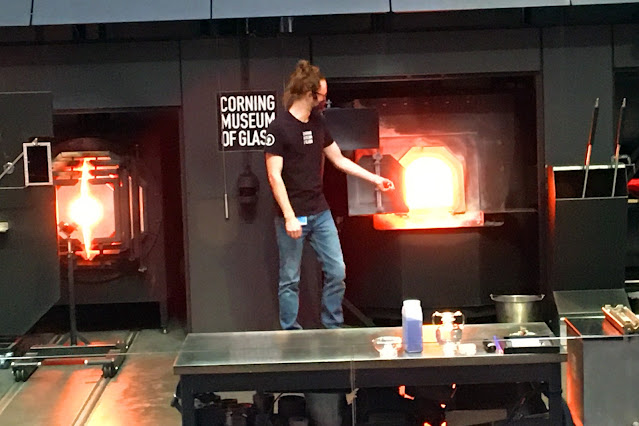 For those who get a bit hungry during their visit, there is an on-site cafeteria with a fairly decent range of honest food, not just sugary or salty snacks. Finally, there’s the obligatory gift shop. This one is HUGE and, to Corning’s credit, visitors are not forced to exit through it, though fans of glass, souvenirs and tchotchkes will find it hard to resist.

Back in this historic district, individual merchants are eager to capitalize on Corning’s draw. Stained- and blown-glass shops and studios abound, including one offering world-famous Steuben glass. Many shops unrelated to glass making have glass art and artifacts adorning their premises.

The historic district is also home to the Rockwell Museum. Don’t be misled by its name. Affiliated with the Smithsonian, it is a museum where visitors “explore the people, land and ideas that shape America through the eyes of American artists.” Unlike the Smithsonians, there is a modest admission charge, and each ticket is good for two consecutive days, allowing visitors to avoid museum overload.

See as much of Corning as your schedule and personal interests allow. But see it.
Visit my main page at TheTravelPro.us for more news, reviews, and personal observations on the world of upmarket travel.