on November 06, 2019
Many airline loyalty programs are failing to deliver on their intended purpose because members do not understand how to redeem the awards they accumulate. That’s the conclusion of a just-released study by consumer research company J.D. Power.

According to the J.D. Power 2019 Airline Loyalty Program Satisfaction Study, nearly half (45 percent) of program members say they do not understand how to redeem their miles and/or points. This lack of understanding has a significant negative effect on overall customer satisfaction.

"This is the third year in a row that we’ve seen airline loyalty program customer satisfaction hampered by a widespread lack of understanding of how to extract the most value from the programs," said Michael Taylor, Travel Intelligence Lead at J.D. Power. "Many airlines are evaluating the success of their loyalty programs based on dollars spent by travelers rather than on miles flown. That’s a significant shift away from rewarding frequent travelers and toward rewarding high spenders."

Following are some key findings of the 2019 study:
The 2019 Airline Loyalty Program Satisfaction Study measures member satisfaction with airline rewards and loyalty programs based on four factors (in order of importance): earning and redeeming rewards (34 percent); program benefits (27 percent); account management (24 percent); and member communication (15 percent). The study is based on 3,188 responses from rewards program members and was fielded in August-September 2019. 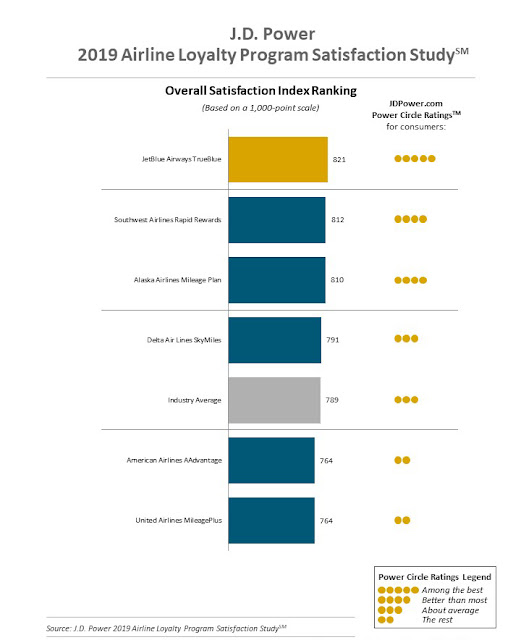 My frustration with airline mileage programs does not stem from not being able to figure out how to use them; it’s from the flight options I’m offered when I do.

Most often, the flight options I’m presented with offer flights at the least desirable times and require at least one change of planes. I understand the airlines want to put these non-revenue-generating posteriors into seats that would otherwise be empty, but offering second- and third-tier service does not engender loyalty; it just pisses people off.

To that point, I’m not surprised that jetBlue and Southwest ranked so well. jetBlue says they don’t oversell their aircraft, meaning there are potentially more seats available for their members who want to use miles. Southwest consistently ranks at the top of the annual Switchfly Reward Seat Availability Survey, with award seats available on 100 percent of its flights.

So there are examples of airlines who understand how to make customer satisfaction a priority. Now, if only the others (and there are SO many….) would take a lesson or two from them.