on October 25, 2019
Deployed to Dayton, Ohio,  I was back in somewhat familiar territory.

We’d visited Dayton a couple of times during the five years we lived in Indianapolis, and our favorite destination in the area was the Air Force museum at Wright-Patterson Air Force Base.

Officially called the National Museum of the USAF, admission to the museum is free, though there is a charge for the Air Force Museum Theatre and flight simulators.

It is unapologetically a military museum and, while not particularly graphic, war isn’t neat and tidy. Several exhibits do deal with what might accurately be called “the horrors of war,” and those who are sensitive about the violence that is part and parcel of armed conflict would probably do well to avoid the museum with one notable exception. The museum also houses the Presidential Gallery, a collection of 10 aircraft that have, at one time or another, served as Air Force One.


Visitors can walk through four of the aircraft, including the Boeing VC-137C with tail number SAM (Special Air Mission) 26000 – the plane President John F. Kennedy rode into Dallas on November 22, 1963, and on which Lyndon Baines Johnson took the oath of office later that same day, hours after Lee Harvey Oswald took Kennedy’s life.


On display at the spot where the oath was administered by Federal Judge Sarah T. Hughes is the famous photo of Johnson with his right hand raised and his left on a Bible, with Jacqueline Kennedy in her pink blood-stained suit, standing next to him. 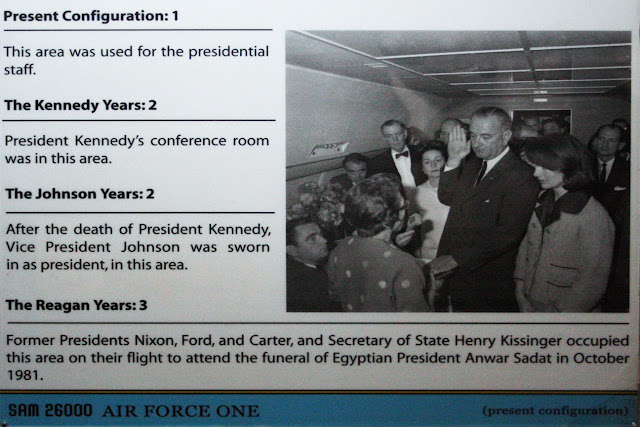 The hairs on the back of my neck stood up when I realized where I was, because I’m old enough to remember full well where I was when I heard that the President had been shot.

There was a companion Boeing VC-137C in service at the same time. It has tail number SAM 27000, and is on display at the Ronald Reagan Presidential Library in Simi Valley, California.

Other presidential aircraft featured at the museum include the VC-54C Sacred Cow, which was first used by President Franklin Delano Roosevelt in 1945. The aircraft is equipped with a battery-powered elevator at the rear of the aircraft so that Roosevelt could be brought aboard easily while he remained in his wheelchair. 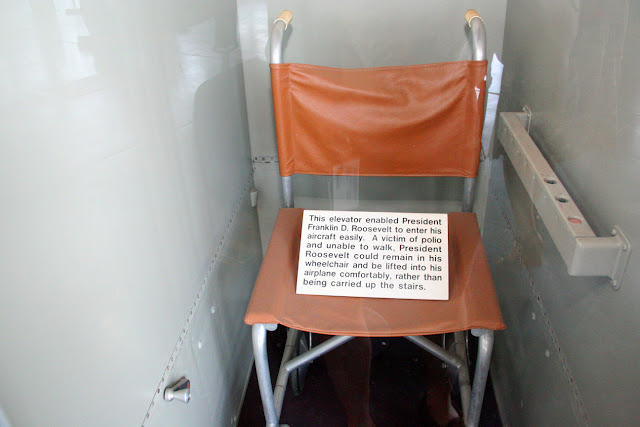 That aircraft was also the location where President Harry S. Truman signed the National Security Act on July 26, 1947, establishing the Air Force as an independent service. The pen used by Truman to sign the Act is displayed nearby.

While they used to be in a separate hangar, the Presidential planes are now part of the fourth building on the main campus. All the buildings are connected and open daily from 9 a.m. to 5 p.m.

My quarters were about 17 miles south of WPAFB, south of a suburb named Kettering. It was pleasant enough but basically a typical Midwest suburb. Lots of chain stores, restaurants and hotels, but there was a notable exception located right next to my hotel.

The Chop House Steakhouse is not where you take your vegan friends; it’s for dyed-in-the-wool carnivores like me. I ate there three times during my visit to Dayton and thoroughly enjoyed each and every visit. Great food and excellent service in decidedly upscale surroundings.

On my first visit, I had a glass of Sauvignon Blanc and the seared tuna appetizer, which I thought was more like a Hawaiian poke. Delicious, light and satisfying!

During my second visit night, I decided to indulge my red meat craving with their slow-roasted prime rib. Thoughtfully, they offer an 8-ounce portion, which is more than enough. It came with a salad or soup and a baked potato, though they're happy to sub another side for the spud. I went with the burgundy braised mushrooms.

My finale included a simple Bombay Sapphire martini, up, with bleu cheese olives, thank you, followed by a Hendricks martini, a favorite of a late relative.

And, just as the food was always top-notch, so was the service. Over the three nights, bartenders Mark, Rocky, Logan and Dani were friendly and engaging, making me feel more like a valued guest than simply a customer.

It’s part of a 12-location chain with nine locations in Tennessee, one in Augusta, Georgia and another in Lexington, Kentucky in addition to the Dayton location.

Dayton is home to the University of Dayton, a handful of country clubs, one casino and is close to another so those who are so inclined can get their gambling fix. And while pleasant enough, I wouldn’t put it very high on a list of “must see” destinations, except for the Air Force Museum.