on October 28, 2019
Akron, Ohio – home of the Goodyear blimp – is a very nice bedroom community with easy access to other attractions nearby. While perhaps not a particularly appealing tourist destination in its own right, its proximity to other areas of Ohio make it a good place to use as a center of operations.

For me, the best thing about Akron was discovering a business with which I had a very personal connection: Mary Coyle Ice Cream.

If you haven’t lived in Akron or Phoenix, Arizona, it’s quite possible you’ve never heard of Mary Coyle Ol’ Fashion Ice Cream. But I grew up in Phoenix and my sister and I actually lived next door to one of Mary’s sons and daughter-in-law, and were playmates with their kids.

Mary Coyle Ol’ Fashion Ice Cream was started by Walter and Mary Coyle. Over the years, their chain grew to five Mary Coyle Ice Cream Parlors in Akron. In 1951, they sold their stores and moved their family to Phoenix, Arizona, where the couple opened another five stores that quickly became “the place to be.”


Walter died in 1961, about the time we moved to our house in a new subdivision near 35th Avenue and Bethany Home Road. Our new next door neighbors were Mary’s son and daughter-in-law and their young children, who became our pals.

Driving along Market Street to a meeting in downtown Akron, I nearly caused an accident when I stopped suddenly upon seeing the Mary Coyle sign. Same font, familiar memories!

I was staying in the city’s northwest suburb of Fairlawn, which had a fair number of business parks interspersed with homes, apartments and hotels. There were many chain restaurants of the Cracker Barrel/Bob Evans ilk, and one nicer place where I enjoyed a couple of happy hours: Hyde Park Prime Steakhouse.

They had a happy hour that extended until 6:30, later than most, and some well-prepared small plates that were more modestly sized than their full entrees; the perfect thing for someone trying to keep his weight from ballooning during an extended road trip where restaurant meals were all too frequent.

As I said at the beginning, one of the attributes of Akron is its proximity to other attractions, making it a great central location for those inclined to explore northeastern Ohio.

For example, my hotel was only about a half-hour drive to Cleveland and the Rock ‘n’ Roll Hall of Fame. Particularly for us Baby Boomers, it has a lot of appeal, though I saw plenty of younger people there, too. I describe it as a Hard Rock Café on steroids, but a long-time friend who lived in nearby Shaker Heights vehemently disagrees. She says it is "a lot cooler than that." If you're a rock 'n' roll fan, check it out and judge for yourself. 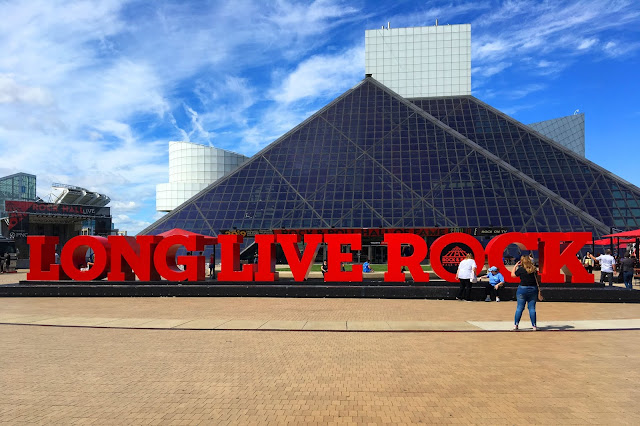 Cleveland is also home to celebrity chef Michael Symon’s restaurant Lola Bistro, for those who enjoy fine dining. It’s also the closest city where one would be able to take in a professional sports game, and the Browns are (of course) the local fave.

West of Akron is the town of Wooster. I worked there for a couple of weeks and found it to be a charming smaller city. It had an attractive downtown with a very nice library, the Everything Rubbermaid store, and several very good restaurants and watering holes. People were welcoming and friendly, and in many ways it’s a nice place to get a taste of a simpler, yet thoroughly up-to-date, style of life.

Park the car near the library and simply walk around the downtown area. There are shops and stores, restaurants aplenty, and numerous churches just north of the main east-west thoroughfare of Liberty Street.

About 45 minutes west of Akron, Wooster is home to a surprising amount of industry.

Home handypersons will recognize the name Wooster Paint Brushes. Yes, they’re made in Wooster. The German automotive and industrial supplier Schaeffler has a large plant that manufactures torque converters. Cargill has an animal nutrition plant in town. GOJO Industries, manufacturers of the hand cleaner of the same name, also has a manufacturing operation in Wooster. Frito-Lay has a plant west of downtown; JM Smucker has its plant, café and store nearby, and Morton Salt has an operation within striking distance.

Wooster is also on the edge of Amish Country; the town of Berlin (pronounced: BURR-lin, unlike the city in Germany) is the epicenter and is about 20 miles away.


Amish Country is charming and harks back to a simpler time. Life slows down, as must cars so they can more safely pass the many horse-drawn carriages and people on bicycles sharing the same roads as locals and tourists in their automobiles.

Stores featuring hand-made furniture and dairies boasting various types of cheeses abound, but weekend warriors will have to limit their wanderings to Saturdays. Devout Amish simply don’t do business on Sundays.

Don’t dismiss the area as “fly-over country”; plan a visit and see for yourself what a goodly portion of America thinks of as home.