Located just 24 kilometers south of the Arc de Triomphe in Paris, travelers who arrive at Orly can board the bullet train to other destinations in Europe, or simply take a local train, bus or taxi and enjoy the City of Lights.

Corsair touts the convenience of Orly airport, but in fact it is only slightly closer to the city’s center than Charles de Gaulle (CDG), the city’s other major hub. CDG is about 30 kilometers northeast of the city center compared to 24 km for ORY, but CDG has more frequent access via public transit.

Information on Corsair beyond what is posted on its web pages is difficult to come by. SeatGuru.com, a resource I use often and recommend frequently, has no information about seat width and pitch.

Two reviews on the SKTRAX website were fairly divergent. One 2016 review said, "If you chose to take Corsair 'Grand Large' class you will be surprised by the service and comfort that you will get for half the price of the premium economy class from Air France.** The lounge, the meal, the comfort of the seat, the Corsair team will offer you an excellent service. But do not take Corsair economy class!"

That reviewer gave the carrier nine out of a possible 10 points.

A more recent review, from 2019, was less generous, giving it five out of 10. That reviewer said the cabin was very tight, the in-flight entertainment system was old and not very responsive, and the in-flight catering was "just OK."

The carrier offers three classes of service: Business, Premium and Economy. However, it has also adopted the all-too-common practice of offering artificially low economy ticket prices which it makes up for by adding on “ancillary revenue” generators, particularly in the economy cabin. Those range from charging for seat selection to priority boarding to certain in-flight meals. 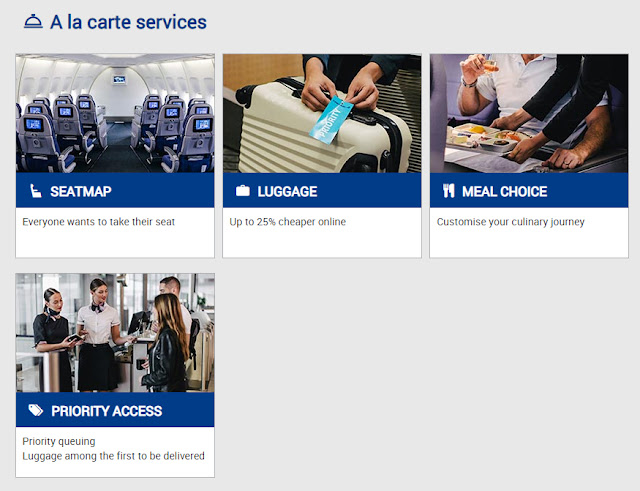 For example, Corsair offers four types of fare in Economy, and each includes a different array of offerings. Economy fares include Eco Classic (the most basic), Eco Smart (which includes basic seat choice) and Eco Flex. The table below shows what is included with each. 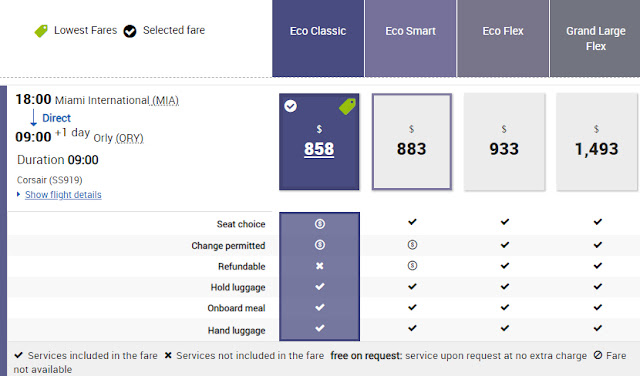 Premium and Business offerings include Smart and Flexible fares. Both types include one carry-on and two checked bags per flight and free seat choice. Premium passengers chose between two main courses at meal times while Business passengers have four choices. The Smart fares allow changes and cancellations for a fee while the Flexible fares include free changes and “open return” tickets.

That’s a total of eight different fare schemes for an airline offering three classes of service.

After finding that the June promotional fares of “$339 each way” offered in the email sent to TheTravelPro by the airline’s PR firm were no longer available, I decided to get a real-world example for a round-trip flight leaving MIA on June 21 and returning a week later. An Eco Classic fare could be had for $1,639 at the airline's website Corsair.us, but that did not include choosing where you’ll sit. That would cost an additional $30 to $45 each way, depending on which seat you chose.

If you think you might get hungry during the trans-Atlantic crossings – which are as long as 10 hours heading west – basic sustenance is included but special meals run from $18 to as high as $80 for a “Prestige meal.” Hindu, kosher, diabetic and gluten-free meals are offered without additional charge. 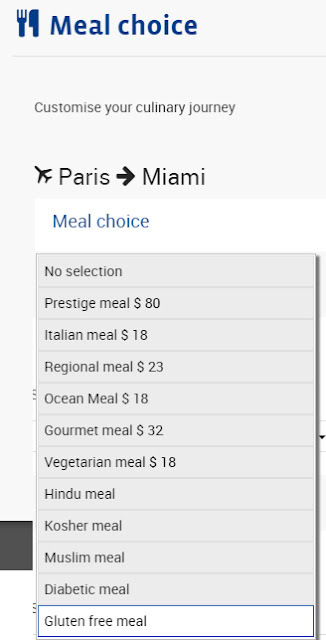 Priority check-in at ORY can be had for an additional $25. Want your bag faster at MIA when you land? That’ll bump the price by another $15, to $40, because priority baggage claim is only bundled with priority check-in.

A Grand Large Flex (premium) fare will be about $3,000 round trip while a Business will run $4,088 round trip. Business includes seat selection and a discount on the “Prestige meal” if chosen.

For comparison, Air France offers a standard economy flight from MIA to CDG on the same dates for $2,800, Premium Economy for $3,453 and Business from $4,700.

From my research, it appears that Corsair's all-in fares are a bit lower than some of the competition. Whether the savings are worth any potential sacrifice are an individual choice.

** - Editor's note: In the example above, Air France's fare is not double Corsair's fare, as the reviewer claimed.