on May 30, 2019
During our recent cruise, we visited several cites that abut the Baltic Sea. Unfortunately, the weather was overcast for our time ashore in St. Petersburg, with the sun peeking out just as we were boarding the bus that would take us back to the ship. Even in less than ideal light, the city offered some amazing sights, which we are pleased to share.

St. Petersburg is a very modern city with roots that reach back to its founding by Czar Peter the Great in 1703. It is a city where modern flats sit next to Gothic churches, where old cars park in front of high-end stores with names like Fendi, where 19th century churches like Kazan Cathedral sit directly across the street from a new Starbucks.

One of the most popular tourist stops is the Church on the Spilled Blood. Construction began in 1883 during the reign of Alexander III, two years after the assassination of his father, Alexander II, and as a memorial to his fallen father. 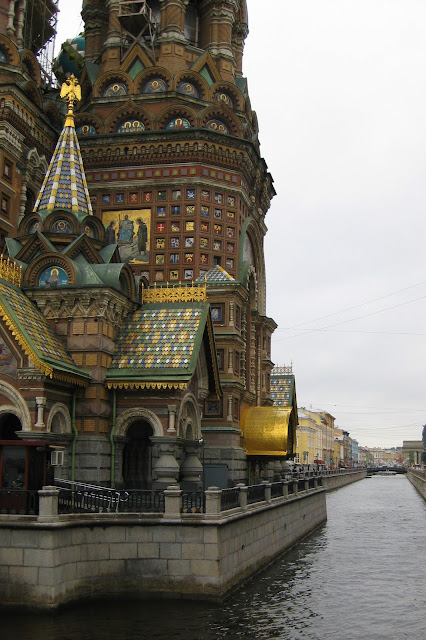 Churches with similar design are ubiquitous in the city and include St. Vladimir church below. 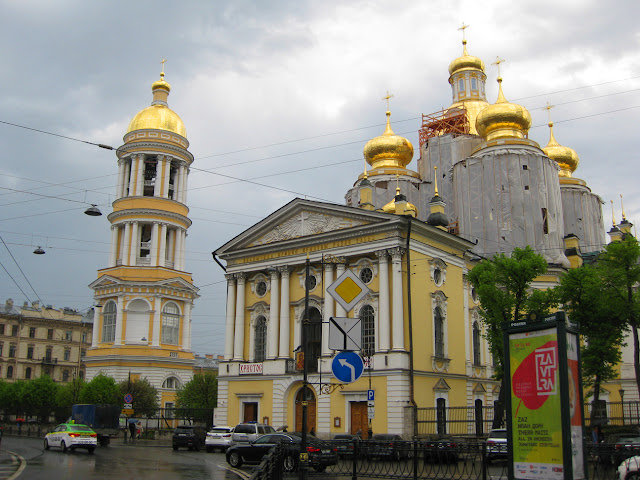 We visited just after what the Russians call Victory Day, the holiday that marks the surrender of Nazi Germany in 1945. Banners along Nevsky Prospekt commemorated May 9, 1945. 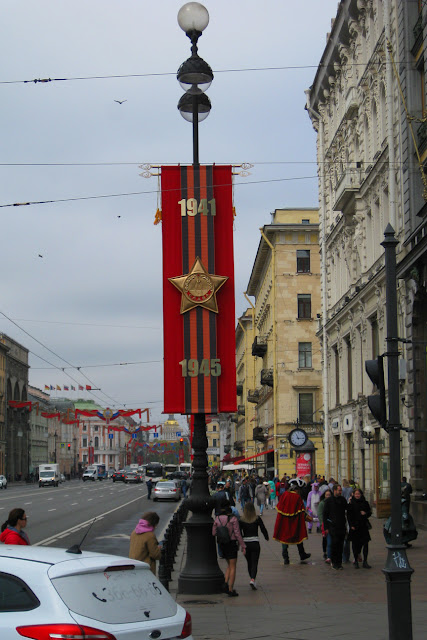 Also along Nevsky Prospekt is Kazan Cathedral or Kazanskiy Kafedralniy Sobor, also known as the Cathedral of Our Lady of Kazan. It is a cathedral of the Russian Orthodox Church dedicated to Our Lady of Kazan, one of the most venerated icons in Russia. The cathedral is so large, it's impossible to get in a single photo without a super wide-angle lens. 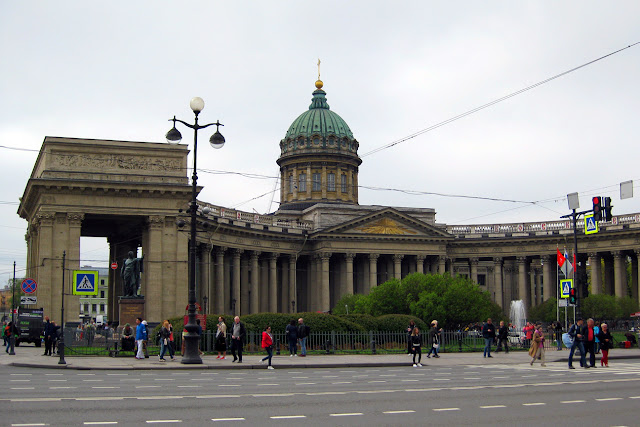 Across the street from the cathedral, which was constructed beginning in 1801, is a 21st century icon that stands in stark contrast. 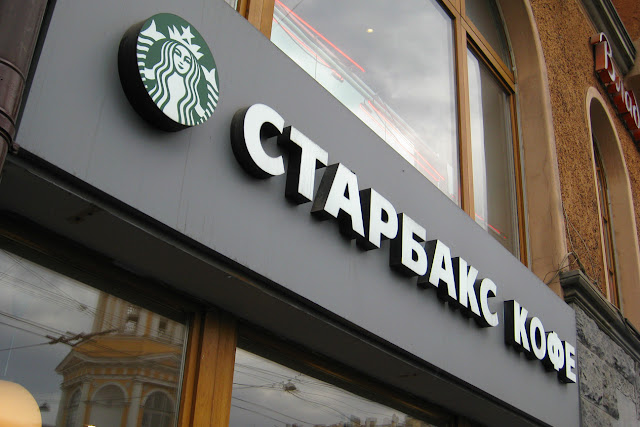 A few doors down is a little coffee shop called Restaurant Abrikosov. We popped in for a bite of lunch and reviewed the establishment here.

The city boasts a great many monuments to Russia's heroes. Most of those are the centerpieces of the city's many parks and squares, including this memorial to Alexander Pushkin. 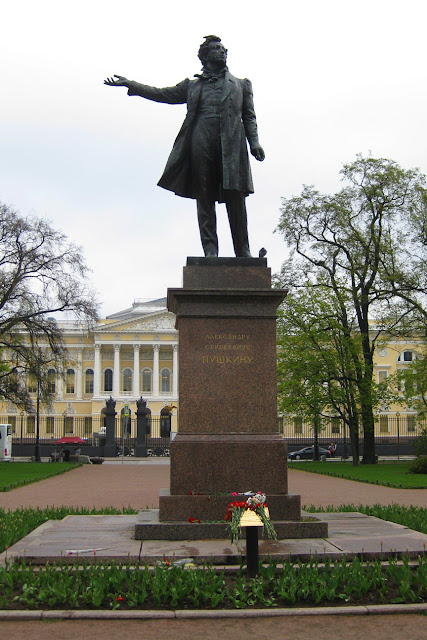 Other works of public art are less political and more whimsical, such as this rendering of a Russian sailor keeping guard outside a local restaurant. 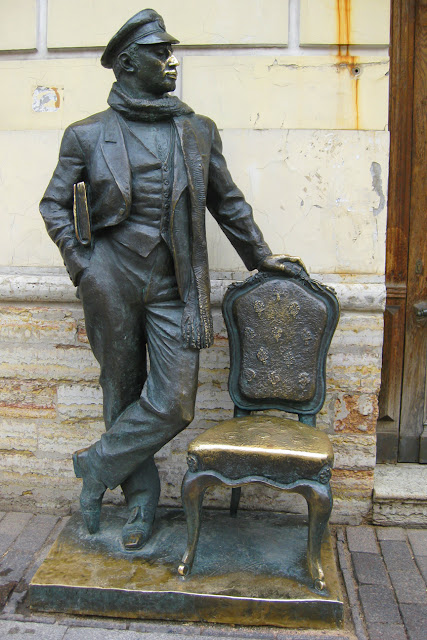 Speaking of sailors, St. Petersburg monuments include columns on which are mounted the prows of ships captured by the Russian navy. Their position along the waterfront is intended to intimidate any aggressors who may be contemplating an attack on the city. 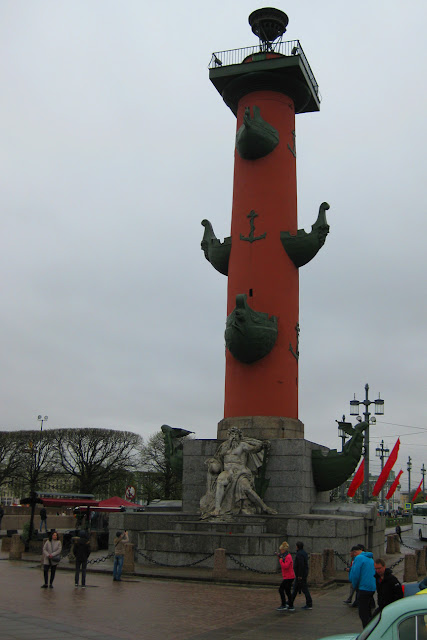 One of the wonders of St. Petersburg is its Metro system.  Opened in 1955, its opulent underground stations, complete with intricate mosaics, were designed to bring palaces to the people. 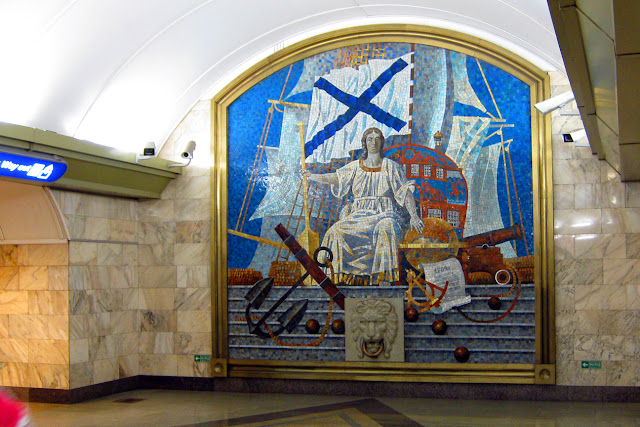 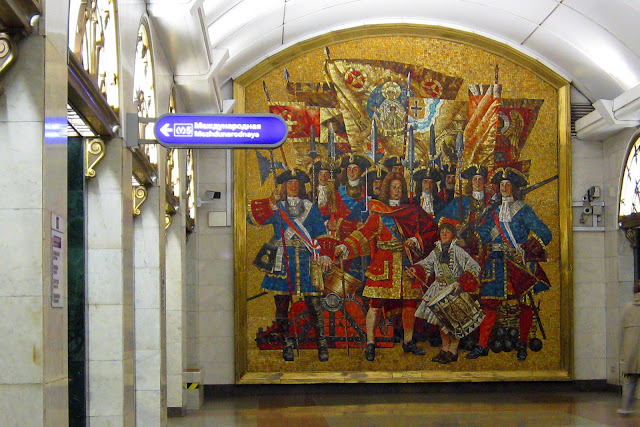 As a port of call for numerous cruise lines, St. Petersburg endeavors to put its best foot forward. One of our tours took us to a food market, which our guide said was actually too expensive for locals. Residents, she said, tended to patronize markets and stalls in the suburbs, which she admitted were less glamorous and less well-stocked. 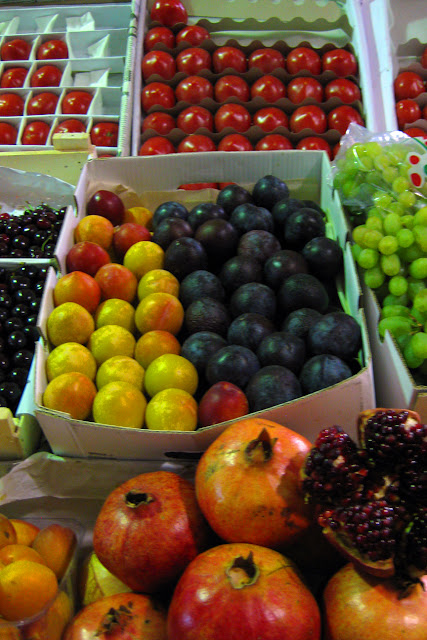 No trip to Russia would be complete without tasting vodka.  Our tour took us to the Museum of Russian Vodka where we were given a history lesson about how vodka came to be. Originally called "bread wine" because it was made from wheat, we were treated to samples of three different kinds of vodka, accompanied by traditional snacks.


Tours bring visitors to higher-end areas like Nevsky Prospekt and its surrounds, and avoid areas that do not project the desired image. However, astute observers can quickly spot things that don't align with the impression they're intended to get.

One apartment complex we passed on our way to our upmarket destination reminded me of a scene from the 1997 movie, "The Peacemaker," in which a character spoke of "shitty little apartments" in Soviet Russia. 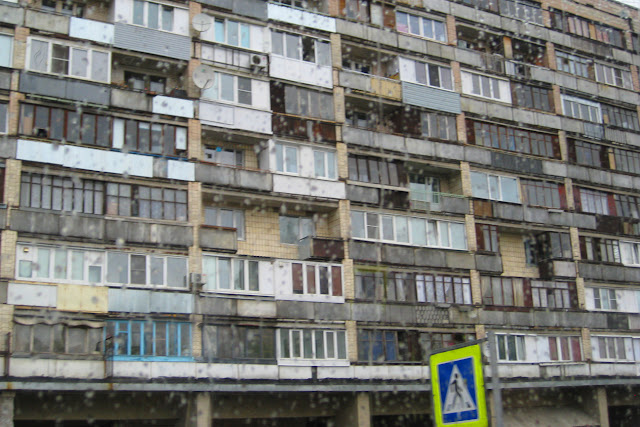 Even through the rain-splattered bus window, you can see the deteriorating condition of this apartment block.

But clean and modern are the rule rather than the exception, and one could fairly describe some aspects of Russian architecture as avant-garde. An excellent example are the new headquarters for Russian natural gas company, Gazprom. The Lakhta Center is an 87-story skyscraper built in the Lakhta area of St.Petersburg. The tower is designed to look like a gas flame.