Pictures from Helsinki and Stockholm

on May 31, 2019
During our recent cruise, we visited several cites on the Baltic Sea. Unfortunately, the weather was often less than ideal for photography. Nonetheless, here are some of the photos from two of our Scandinavian destinations.

Helsinki is Finland’s capital and home to more than 600,000. It sits on a peninsula in the Gulf of Finland above 60 degrees north latitude, making for long days in the summer and long nights in the winter.

Its main street, Mannerheimintie, is flanked by institutions including the National Museum, tracing Finnish history from the Stone Age to the present. Walking from the waterfront toward the Mannerheimintie, we strolled along the Esplanadi, where we came upon this statue of Johan Ludvig Runeberg. 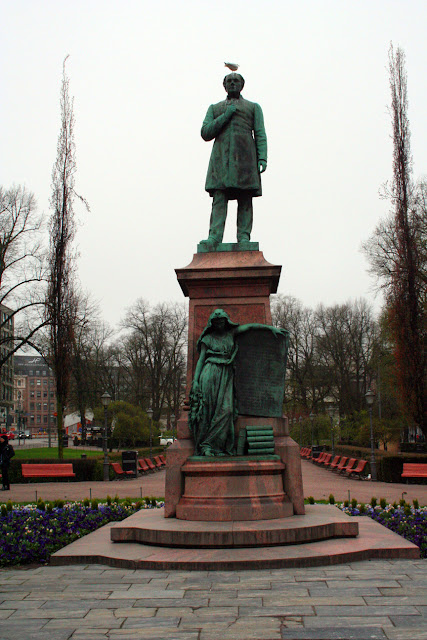 Born in 1804, Runeberg was the national poet of Finland until his death in 1877.  A connected city, a plaque near the statue has a QR code that connects smartphone users to a video called "The Statue Talks to You." We had to wait until we could get a Wi-Fi signal, but it was worth the delay. The three-and-a-half minute video, available here, really brought the bronze figure to life.

An interesting site in Helsinki is the Rock Church. Officially named Temppeliaukio Church, it is a Lutheran church located in Helsinki's Töölö neighborhood. In addition to being an active church, it is also frequently used as a concert venue. 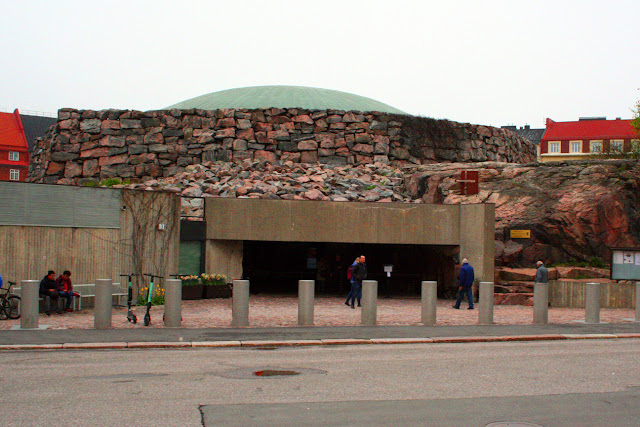 The structure was designed by architects and brothers Timo and Tuomo Suomalainen. Built directly into solid rock, it opened in 1969 and is very popular today with tourists and tour groups. Admission is €3 except on Wednesday afternoons when admission is free. However, lines can be long, as it is capacity-controlled.


Closer to the center of town is the city's Central Train Station. Its design is captivating, whether you're there to catch a train or not. 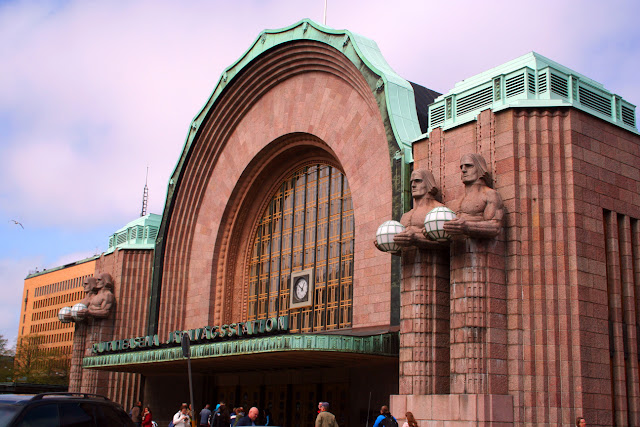 Opened in 1919, the station is clad mostly in Finnish granite. Its distinguishing features are its clock tower and the two pairs of statues holding the spherical lamps either side of the main entrance.

Senate Square is home to many neoclassical buildings, including Helsinki Cathedral, shown below. 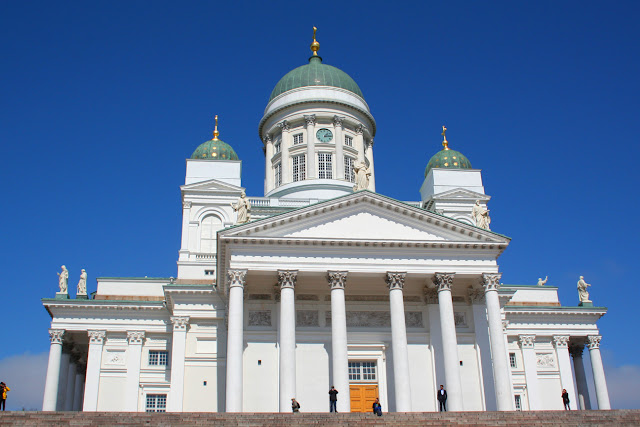 About 13 kilometers northeast of Senate Square is Winter World Helsinki. It offers a Wild Nordic experience where visitors can find snow attractions and activities including a toboggan hill, kicksleds, fun skis, ice sculptures, snow igloos, dogsled rides and much more, including an ice bar where shots of vodka are served in glasses carved from ice. The facility is intended to give visitors a taste of Lapland without leaving metropolitan Helsinki. Guests are provide with the thermal clothing to keep them warm and cozy in the -3º Celsius facility.

On the waterfront, visitors can browse booths selling wares ranging from souvenirs to reindeer burgers, which is what I am chowing down upon. No, the grandkids' Christmas presents are not in danger; this reindeer was not "Santa grade." 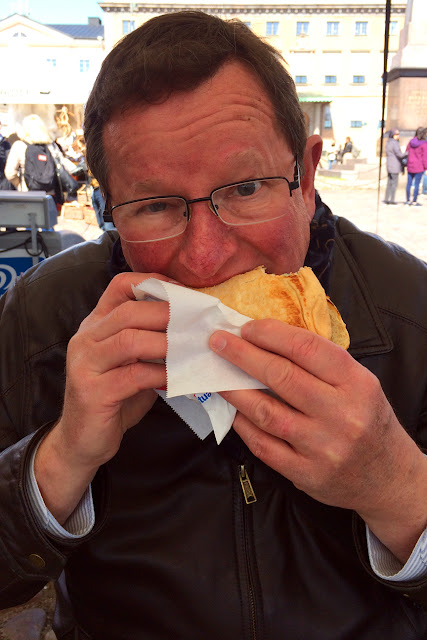 Our next port of call was Stockholm, the capital of Sweden. The city comprises 14 islands and more than 50 bridges on an extensive Baltic Sea archipelago.

After buying a day pass for Stockholm transport upon disembarking our cruise ship, we took a short bus ride from our port to Gamla Stan (the Old Town), then hopped a ferry that would take us to the Djurgården where we would visit the Vasa Museum. On the way, we passed Kastellholmen and the Kastellet. The first fortification on the location was built in 1667. The current structure, shown below, was built between 1846 and 1848 to replace the original structure, which exploded in June 1845.


After landing in Djurgården, we started on the half kilometer walk that would take us to the Vasa Museum. On our way, we passed two other major attractions: the SpritMuseum and ABBA The Museum.

The Spritmuseum calls itself, "Much more than a museum, it is a unique meeting-place, with tasting rooms, a bar, restaurant, café and shop." The museum’s bar offers a range of non-alcoholic and alcoholic beverages and a simple bar menu. Being Sweden, the focus is on aquavit and Absolut vodka.

For 270 SEK or about $27, an adult can see the museum and sample a Tasting Tray. The Traditional includes three Swedish Aquavits and one Arrack Punsch, similar to Greek Ouzo. The Absolut tray includes Absolut Peppar, Citron, Vanilia, and Extrakt vodkas.


Teetotalers are welcome as well; admission without alcohol is 130 SEK for adults, 90 SEK for "Pensioners" age 65 and better.

A lover of music (and a former radio disc jockey), I recognize the part ABBA played in putting Sweden on the musical map by winning the Eurovision Song Contest in 1974 with "Waterloo." However, I found the admission price of 250 SEK, or $25 per person ($50 per couple) off-putting. Apparently, I'm not that big a fan...

Arriving at The Vasa Museum, we were joined the line and were soon inside. 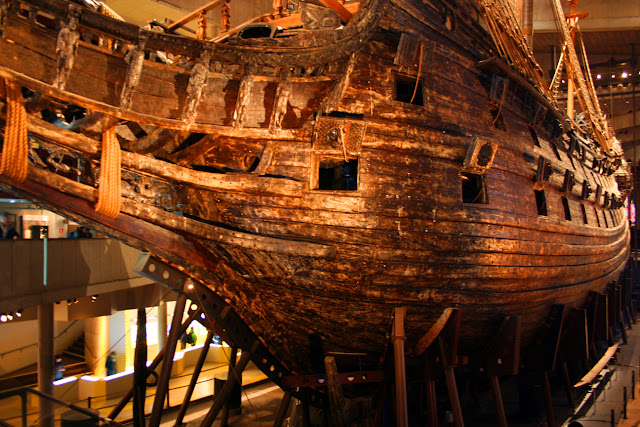 In the late 1950s, the ship was located in a busy shipping lane just outside the Stockholm harbor and was salvaged with a largely intact hull in 1961. It was housed in a temporary museum until 1988 when it was moved permanently to the Vasa Museum in the Royal National City Park in Stockholm. The ship is one of Sweden's most popular tourist attractions and has been seen by over 35 million visitors since 1961.

From the Vasa Museum, we crossed on of the city's many bridges into Östermalm.


We hopped on a passing trolley that took us in the direction of the main train station, where we would join our walking tour of the Gamla Stan.

Our guide showed us a number of sites including Gustav Adolfs torg, a town square named after King Gustav II Adolf, numerous churches and government buildings, and the statue of St. George and the Dragon.

The statue was commissioned by Sten Sture the Elder, who led the Swedish army to victory over the Danish army in the Battle of Brunkeberg in 1471. 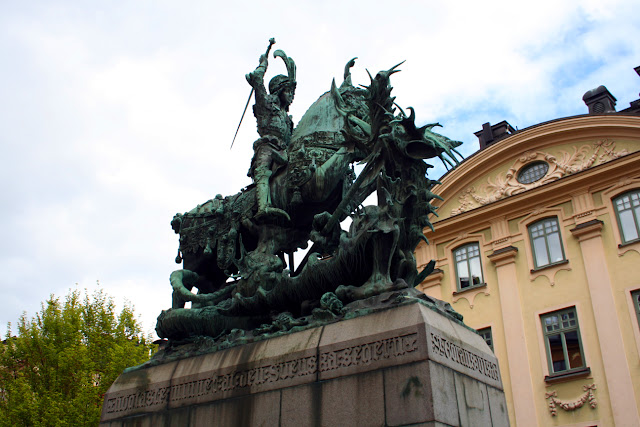 Significantly, the statue is positioned downhill from the Stortoget, the large square in the center of Gamla Stan that was the site of the Stockholm Bloodbath, where Swedish noblemen were massacred by the Danish King Christian II in November 1520. It is said that the blood flowed down the streets that encircle the statue, enraging the locals and fomenting a revolt and civil war that led to the dissolution of the Kalmar Union and the subsequent election of King Gustav I.

On a happier note, we were then taken to the smallest public monument in Stockholm: The Järnpojke, or Iron Boy. Its diminutive size - a mere 15 centimeters tall - and its location in a church courtyard off the area's main footpaths, make it a hidden gem.


At the conclusion of the tour, we wandered the cobblestone streets of the Gamla Stan before heading back to our ship.