Revealed: the world’s most (and least) reliable airlines

on February 05, 2019
As many of us are starting to plan our summer travels, new research from travel insurance provider Get Going could prove helpful if your trip involves flying to your destination.

The U.K. medical travel insurance provider https://getgoinginsurance.co.uk cross-referenced data from AirlineRatings.com, FlightStats.com, FlightAware.com, and caa.co.uk for 50 of the world’s most popular airlines. The data, accessed in November 2018, determined the world’s most, and least, reliable carriers.

“With people beginning to plan their holidays for the year, everyone wants to be reassured that things will go according to plan when they book their flight,” Josh Hancock, a Get Going spokesperson, said. ”By updating our research this year, we hope that travelers can be confident in their choices and also avoid any unnecessary hassle that could potentially ruin what is supposed to be a relaxing and enjoyable time.”

Persian Gulf carriers Emirates and Qatar Airways also made the top ten, in sixth and seventh place, respectively. Nearly 85 percent of Emirates’ flights arrived without delay, scoring a perfect ten out of a possible ten for safety, according to the survey. Qatar Airways lagged slightly behind, with nearly 84 percent of its flights running on time. 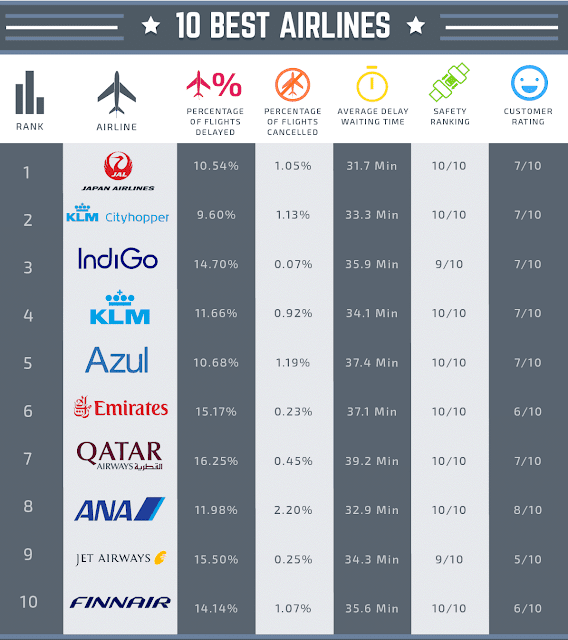 At the other end of the scale? U.S. carriers, among others. BIG surprise!

Spanish-based airline Vueling, known for its affordable prices but widely criticized for its customer service, had 23.74 percent of flights delayed with an average waiting time 55 minutes. It was ranked the third least reliable airline of 2019.

Of the Big Three U.S. carriers, Delta Air Lines (NYSE:DAL) rated highest, at No. 24, while United Airlines (NYSE:UAL) was No. 37. Smaller U.S. carriers Southwest (NYSE:LUV), jetBlue (NASDAQ:JBLU) and Spirit (NASDAQ:SAVE) ranked No. 28, No. 33 and No. 39, respectively. Surprising to this Seattle-based writer, Seattle-headquartered Alaska Airlines (NYSE:ALK) was not included.