Best and worst places to spend the 4th of July

on June 27, 2018
What is the best place to spend the 4th of July? While I would say, “Wherever friends and family gather,” personal finance site WalletHub.com took a less emotional and more data-driven approach to ranking the 100 largest U.S. cities for their Independence Day appeal.

WalletHub measured five dimensions and 19 relevant metrics to arrive at its rankings. The dimensions were 4th of July Celebrations, Affordability, Attractions & Activities, Safety & Accessibility and the all-important Fourth of July Weather Forecast.

The first dimension carried the most weight: 40 out of a possible 100 points. Within the first dimension, the study looked at 4th of July popularity, the legality of fireworks, the number of 4th of July festivals and performances, the average price of a 4th of July party ticket, the duration of the fireworks show(s), and how the city appeared in a Google search for 4th of July celebrations.

Affordability accounted for 15 points and included the prevalence of affordable restaurants ranking 4-1/2 stars or higher, the average cost of a burger, average beer and wine prices, and the lowest price of a 3-star hotel.

Attractions & Activities, Safety & Accessibility and the 4th of July weather forecast each also accounted for 15 points in the tally.

The best city for celebrating Independence Day, according to the survey: New York City. It ranked No. 1 for Attractions & Activities, No. 2 for Safety & Accessibility, and No. 5 for 4th of July Celebrations. Less impressive were its scores for 4th of July Weather Forecast (No. 26) and Affordability (No. 89), though that is hardly surprising to anyone who has visited The Big Apple. 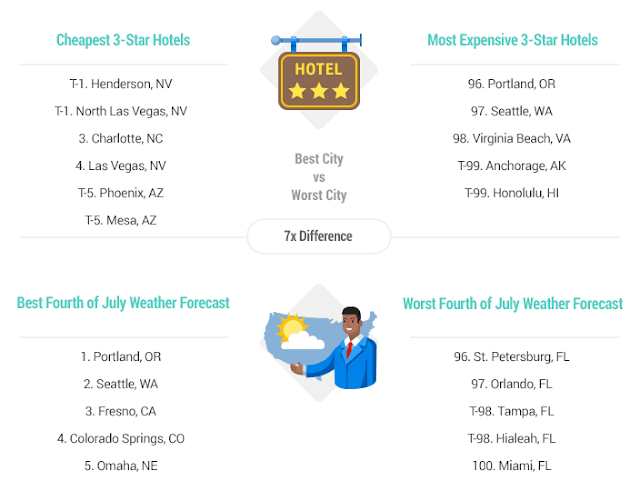 Los Angeles, Chicago, Denver and Seattle rounded out the top five for overall appeal. Washington, DC – the nation’s capital – was No. 9.

Los Angeles ranked No. 1 for its 4th of July celebrations while Denver ranked No. 2, Chicago ranked No. 2 behind NYC for its Attractions & Activities, and my home of Seattle landed the dubious honor of being the most expensive city in which to celebrate Independence Day.

At the other end of the scale, San Bernardino, Calif., a suburb of No. 2 L.A., was ranked as the worst place to celebrate. Maybe that’s because the City of Angeles is drawing everyone to it for the 4th. Hialeah, Fla. was No. 99 with Memphis checking in at No. 98. Winston-Salem, N.C. – a fine city in many regards though having been part of the confederacy may influence local attitudes – was No. 97 for celebrating the 4th, and Garland, Texas filled out the bottom five cellar-dwellers. 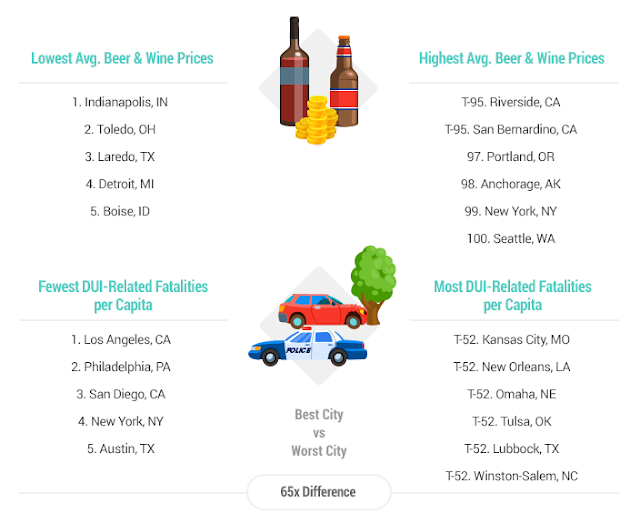 The survey contained some surprises, including that Portland, Ore. and Seattle ranked Nos. 1 and 2, respectively, for Best Fourth of July Weather Forecast. For that metric, the city was penalized if its forecast temperature on the 4th is colder than the holiday’s average temperature and penalized if precipitation is forecast.

Metrics and statistics notwithstanding, I still say the best 4th of July is wherever friends and family gather. Burgers, brats, beer and big booms just make it that much better.