on September 19, 2017
The world’s airlines continue to reap an ever-larger windfall from the constantly increasing range of ancillary services they sell their customers. In fact, a new report shows the 66 airlines that provide financial data related to those à la carte charges raked in $44.6bn last year.

The 2017 edition of the CarTrawler Ancillary Revenue Yearbook was prepared by IdeaWorksCompany, which researched financial filings made by 138 of the world’s airlines, including 66 which disclosed qualifying revenue activity. The 110-page report provides a detailed global review of this revenue source, which is both credited for returning the airline industry to profitability, particularly in the U.S., and roundly criticized as greedy airlines “nickel-and-diming” their customers.

Regardless of the sources or one’s particular perception, the numbers are clear: ancillary revenue delivered a whopping $6.22bn of United Airlines’ (NYSE:UAL) revenue, 39.4 percent of sales for Wizz Air, and $49.89 per passenger carried by Spirit Airlines (NASDAQ:SAVE). And more carriers are jumping on the bandwagon. Airlines joining the list for 2017 include Azul, Eurowings, Jejuair, Jet Airways, South African, and Vietjet.

Among U.S. airlines, United pulled in the most ancillary revenue overall, and more than half - $3.26bn – came from services such as checked bag fees and travel retail commissions. Delta Air Lines (NYSE:DAL) realized $5.17bn total with $2.48bn from à la carte fees, while American (NASDAQ:AAL) took in $4.9bn total, with $2.79bn coming from those fees.

Southwest (NYSE:LUV) took in $2.82bn total, though 80 percent of that came from activities related to its frequent flier program.

Overall, the $44.6bn taken in by the 66 airlines represents 9.7 percent of total sales for the carriers airlines covered by the survey, which is up from last year’s 8.7 percent.

The survey covers airlines that disclosed revenue in 2016 financial filings from activities such as frequent flier miles sold to partners, fees for checked bags, and commissions from car rentals. This year's edition includes a list of the a la carte items sold through Amadeus, Sabre, and Travelport for each of the 66 airlines.

For example, optional extras for baggage, seat assignments, meals and sports equipment can be booked through Travelport-equipped agencies on AirAsia, and baggage, meals and unaccompanied minors can be booked for Pegasus through the Amadeus system.

Airlines are increasingly more revealing about their approach to ancillary revenue.

During the course of its global review of ancillary revenue activities, IdeaWorksCompany uncovered the following examples for 2016: 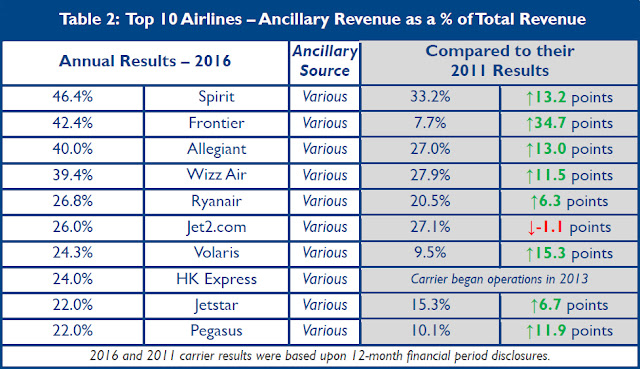 The table above shows the growth of ancillary revenue among the 10 airlines that derive the greatest portion from à la carte charges, and how that revenue has grown over the past five years.

Although ancillary revenue may be a boon to airlines, my experience is that most passengers find à la carte charges annoying in the extreme. Most of those I talk to while traveling complain of being nickel-and-dimed, though I seldom fly low-cost or no-frills carriers. That may well be the line of demarcation, and the report hints that my take may be correct.

Passengers who fly no-frills airlines may well anticipate, and even accept, being charged for this, that and the other, but that is less the case with those who choose more traditional carriers.

“American, Delta, and United recently introduced basic economy fares (sometimes called seat-only fares) to compete with Frontier and Spirit,” the report noted. “These fares reduce the product to a minimalist experience with fees charged for bags and early seat assignments, no elite upgrades, and a ban on flight changes. Yet when presented with higher fare, better service options, the majority of consumers opt to spend more.” (emphasis added)

In other words, those passengers are not willing to accept a “bare-bones” approach and are willing to pay more. So why do traditional carriers continue to emulate their no-frills counterparts?

There are economy, standard and exotic cars. There are budget, average and luxury hotels. There are fast food outlets, quick-serve restaurants, sit-down restaurants like Denny’s and fine-dining, white-table-cloth establishments. Consumers of virtually any other commodity have a range of options from which to choose; why airlines all feel they must pander to the lowest common denominator is quite beyond me.

The report’s authors say, “Challenges faced by the world’s economy reinforce the need for airlines to rely upon ancillary revenue as a tool to serve the needs of consumers and investors.”

I say, “Bull,” and view the report’s comments on the Big Three’s experience selling basic economy fares as an important, if buried, acknowledgement.

Certainly, there are things that arguably should be à la carte such as in-flight meals and alcoholic beverages, use of Wi-Fi and in-flight movies. But I still chafe at having to pay to check a bag, I bristle when an airline wants to charge me to reserve my seat in advance, and it makes me absolutely furious that different fees apply to reserve different seats within the same class. I see that as greed, pure and simple.

To some extent, travelers can vote with their dollars, though there is little meaningful difference across the industry in the U.S. Southwest hits passengers with the fewest add-on charges but offers only slightly more space than American, Delta, United or Alaska. jetBlue and, for the moment, Virgin America offer more space but still charge for checked bags in some fare categories.

Each of us must determine what is most important to us and choose accordingly. However, the days of finding an all-inclusive fare for a comfortable seat in the main cabin on a carrier that delivers excellent service seem to be behind us. And I think that’s a shame.