The addition of these four cities will increase the number of WOW air destinations in the Midwest to five. Earlier this year, WOW air began service to Chicago's O'Hare International Airport (ORD). These four additions will bring the airline's total number of U.S. destinations to 12 since its successful North American launch at Boston Logan International Airport (BOS) in March 2015. 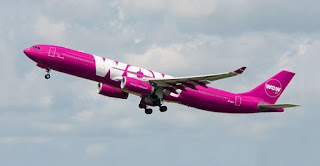 "We are proud of our growth over the last two years and will continue to work tirelessly to provide the lowest fares possible to each region of the U.S.,” Skúli Mogensen, CEO and Founder of WOW air, said, noting that the airline’s goal is, “Helping to make international travel truly a possibility for everyone."

Service from Detroit, Cleveland, Cincinnati and St. Louis to Iceland will commence on April 26, 2018, May 4, May 10 and May 17, respectively. Each route will operate four days per week with continuing service to WOW air's European destinations.

Flights from the four new U.S. destinations to Iceland are available from $99 one-way including taxes, according to the carrier. Fares to WOW air's additional locations from the Midwest, including London, Paris, Amsterdam, Berlin, Frankfurt, Dublin, Copenhagen and more start at $149.

Tickets to WOW air's four new airport partners are on sale now and can be purchased at www.wowair.us.

While WOW air was ranked as the 7th best low-cost airline in Europe in the 2013, 2014 and 2015 SKYTRAX World Airline Awards, it is nonetheless a bargain airline with all that encompasses.

WOW air operates Airbus A330s on its long-haul routes. SeatGuru.com shows that WOW's A330s have seats that are all 17 inches wide. Economy seats offer pitch of 29 to 31 inches of pitch depending on the seat’s location in the aircraft. Those with the largest pitch, 31 inches, are the same size as the seats on a Southwest (NYSE:LUV) Boeing (NYSE:BA) 737. And you’ll be sitting in those seats for about eight and a half hours from the West Coast to Reykjavik (KEF). Those with shorter pitches will be even more confined