on January 20, 2017
What travel trends can we expect to see as 2017 unfolds? According to one source, more “do-it-yourself” travel planning, more visits to offbeat destinations and an increase in home stays.

The experts at online trip planning platform TripHobo dug into their data from 2016 and, based on their findings, issued some predictions for the coming year. According to the data, 62 percent of travelers chose to plan their own trip last year while 23 percent chose to customize the plans created by other users of the travel platform.

“This DIY trend shows that fewer travelers are opting for readymade travel packages as compared to previous years,” the company said in a statement. “Longer trips were planned with more care compared to the shorter ones, as evidenced by the much higher number of revisions made to itineraries of longer durations.” 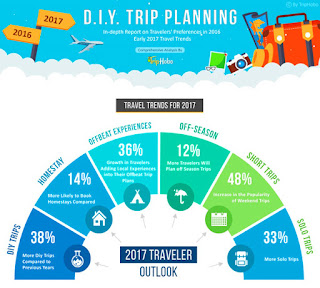 The majority of DIY trip plans came from countries like the United States, China and India. Scandinavian countries Finland, Norway and Sweden show the highest per capita number of DIY trips while the DIY trend is growing faster in emerging markets than elsewhere. The DIY trend is expected to continue growing in 2017, according to the company.

While traditional destinations like France and Italy remained solidly in top slots with the Eiffel Tower and Colosseum continuing to be the most visited attractions in the world, there were new entrees to the list of most visited countries.

More travel itineraries included Japan and Russia as compared to previous years, which indicates that the 2016 traveler was open to less traditional destinations. Going forward, 36 percent travelers are predicted to choose offbeat places and experiences over conventional vacation destinations.

The popularity of short trips continues to rise with a predicted growth rate of almost 50 percent. A third of the travelers are anticipated to opt for a solo trip. Fewer than a sixth of the travelers are expected to plan an off-season trip to avoid crowd and surcharges.

While historically popular destinations will continue to draw tourist crowds, less visited European destinations like Reykjavik, Iceland; Salzburg, Austria; Cork, Ireland; Copenhagen and Ibiza are expected to receive a larger influx of tourists in early 2017. Asian destinations like Leh, a high desert city in the Himalayas, and Andaman and Nicobar Islands on the Bay of Bengal might also garner a lot of tourist interest. Off-beat places like Mongolia and Bucharest are anticipated to see more crowds than usual.

Increasingly, travelers are moving away from conventional hotels, showing a preference for homestays and B&Bs instead. This is evident by the 31 percent increase in bed and breakfast bookings over previous years, a trend which the company predicts will continue in the years ahead.

The TripHobo users who did opt for hotels chose accommodations toward the more modest end of the scale. When choosing more traditional lodging, 62 percent chose a 3-star property over both luxury lodging and humbler hotels.