US airlines rake in highest amount of ancillary revenue -- report

on September 20, 2016
The three major U.S. airlines led the pack in the amount of revenue derived from the sale of so-called ancillary services, according to a report detailing the ancillary revenue earned in 2015 by 67 of the world's airlines.

Conducted by IdeaWorksCompany and sponsored by CarTrawler, researchers dug into financial filings made by 135 airlines worldwide, 67 of which disclosed qualifying revenue activity, and determined that those airlines earned a combined total of nearly $40.5bn in ancillary revenue last year.

Ancillary revenue is revenue gained from retail activities, à la carte services including food and beverage and checked-bag fees, the sale of frequent flier miles, commission-based products including hotel stays and rental cars, and miscellaneous sources such as advertising.

Perhaps more telling than the dollars earned are the percentages of total revenue derived from ancillary services. "It is a logical corollary that airlines with low average fares will have the highest percentage of ancillary revenue," according to the report's authors, and the numbers bear that out. 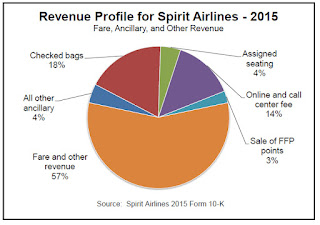 While ancillary revenue overall is up across the board, the average amount obtained per passenger, on average, is mixed.

While widely characterized by travelers as airlines "nickel-and-diming" passengers by charging them for everything from advance seat selection to in-flight headsets, the report showed that is not always the case. Air Canada, for example, earned $548m of its $682.4m in ancillary revenue from the Aeroplan loyalty program for the purchase of reward travel.

Other airlines also earned significant ancillary revenue from items that are truly optional.

Qatar Airways posted revenue of $548m of its $590.9m in ancillary revenue from the sale of duty free goods and beverages. Southwest Airlines earned an estimated $260m from EarlyBird check-in during 2015. Of United's $6.2bn in ancillary revenue, nearly $3bn came from mileage sales, with the majority sold to Chase Bank for the MileagePlus co-branded credit card. Allegiant earned $40.2m from third parties for commissions on items including hotel rooms and rental cars.

Charges for other items, including Premium Economy seating, unaccompanied minors and overweight baggage charges are also readily understood by the majority of travelers. Specifically, Delta saw a revenue boost of $125m during 4Q15 from sales of its Comfort + seating.

While the report contains a great deal of interesting and useful data, its author is clearly in support of the practice of à la carte pricing, referring at one point to "optional extras such as checked bags [and] seat assignments".

The report also includes some statements and conclusions that I find debatable, including that "Consumers embrace these à la carte methods", and "Consumer behavior supports the popularity of seat-only tickets that deliver lower prices." Certainly, some consumers will endure any hardship to save a few dollars and that is certainly their choice.

The problems that I and others see is the degree to which the practice has metastasized in some airlines and that there is increasingly less choice available.

For example, I have no issue with customers paying or choosing to decline on-board food and drink, in-flight entertainment options, Wi-Fi, early boarding and other similar facets of flying. I am less sanguine about checked bags fees, as baggage is almost always a necessary part of air travel. Being charged to reserve a seat in advance, talk to a live agent or print out my boarding pass make me absolutely livid. Ancillary revenue is an area I believe needs to be more strictly controlled.

The author concludes that the à la carte pricing model has created deeply discounted "basic" or "seat-only fares" and that more carriers will follow suit. However, those fares lose some of their appeal when the fees and charges are tacked on. Last year, Wall Street Journal reporter Scott McCartney wrote an article that included a breakdown that showed how ancillary fees, along with standard government fees and taxes, inflated his “$209 fare” on Spirit to a total cost of more than $484. A cynical observer might conclude that the "basic" or "seat-only fares" are a come-on.

If only a few airlines were rapacious in their à la carte pricing (or nickel-and-diming), it would be a simple matter of passengers who don't mind the practice patronizing those carriers while others take their business elsewhere. However, because it is becoming so wide-spread, it may be only a matter of time before there is no real choice left and that air travelers may soon have to face the reality of being nickel-and-dimed no matter which carrier they choose.