South Carolina has the favorite, but Florida dominates the Top 10


Heading for the beach this summer? A recently conducted survey identifies America’s favorite beaches and includes some surprising results.

According to the survey of 1,000 people from all areas of the United States, the beach named as favorite more times than any other was Myrtle Beach, South Carolina, followed by seven beaches in Florida, four in California and one in New York. Those results came as a surprise to survey researchers, who said the results seem to indicate that respondents chose their favorite based on more than which beach had the whitest sand or the prettiest water.

“When we look at what Myrtle Beach has been doing, they have been really adding a lot of attractions like water slides and a massive Ferris wheel and other stuff that's making the beach more attractive from an overall perspective,” the researchers at Tipspoke.com told TheTravelPro in an email. “This data shows that the investment the Myrtle Beach area has been making in entertainment and attractions on and around the beach is paying off."

Tipspoke.com is the recreational information hub that conducted the survey and its researchers used an atypical methodology. While similar surveys will offer a list of beaches to choose from, the Tipspoke survey used a more rigorous process to obtain results that were less biased. 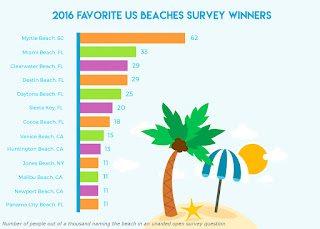 “Biased? About beaches?” you may well ask. Well, yes. If you’re a wonk like me (and even if you’re not), you can see that choosing from a list tends to limit responses to the names on that list, and that skews the results. And there can be other influencing factors as well.

In addition to the open-ended question, the survey was not limited to any specific readership (i.e., not subscribers to a travel website), but rather distributed broadly across the U.S. using Google Consumer Surveys. As well, the survey was published randomly to thousands of adults in the U.S. and was continued until the authors obtained over one thousand responses, which is the size of the sample needed to achieve a plus-or-minus four percent margin for error.

Perhaps because of the sheer number of beaches in the U.S., it took only 62 votes for Myrtle Beach to slip into the top slot. No. 2 Miami Beach received 33 votes. Famous Waikiki Beach in Hawaii received only eight votes and Cannon Beach, Ore. – one of my personal favorites - didn’t even rank in the top 50.

But one’s love for anything is subjective rather than objective, and Sao put the results into perspective: “Every single one of these beaches is a real winner and each has something unique and special to offer.”

Which is true. Among the reasons I love Cannon Beach is because of its rugged beauty, easy access to the hotels, restaurants and other amenities in town, and the opportunity to storm-watch. I’m not big on frolicking in the waves, so the fact that the water off Oregon’s coast can be pretty chilly isn’t a deterrent.

At the same time, I have enjoyed the beached of the Outer Banks and Hilton Head, N.C. for their white sands and comparatively warm water. The Maryland beach in the photo above drew me because of its remoteness and the solitude it offered. Other beaches, including Waikiki, have different draws.

Whatever attracts you to one beach over another, enjoy! Summer’s not over; get up and go!