on March 10, 2016
U.A.E.-based Emirates has unveiled the new business class seats that will make their first appearance in a plane set to be delivered late this year.

The new seats, unveiled at the travel trade show ITB Berlin on March 9, feature a larger screen TV than currently in service, a larger tray for meals, better lighting and redesigns to several of the seats’ features including the privacy panels. A new Boeing (NYSE:BA) 777-300 to be delivered in November will be the first plane to be outfitted with the upgraded seats. 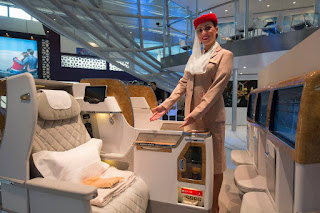 New seats feature, “[A]n ergonomically designed headrest, a pitch of 72 inches and the latest touchscreen controller allowing the seat to be electrically converted into a fully flat sleeping position at 180 degrees,” according to the Emirates news release announcing the upgraded seats.

While the seats themselves represent an improvement over the existing furnishings, the total number of business class seats will remain at 42 in a 2-3-2 configuration. Maintaining the existing three-across arrangement in the center sections elicited a number of critical comments on the carrier’s Facebook page and websites carrying articles about the new seats. The overarching tone of those comments is that, regardless of it being business class, the seat in the center is still “the middle seat.”

That aside, the space provided is nonetheless generous. According to SeatGuru.com, Business class seats on existing 777-300s are 20.5 inches wide – a full 3.5 inches wider than seats in economy  – and have 60 inches of pitch, which is the distance from the back of one seat to the back of the seat in front of it.

The new seats will featured in all Boeing 777-300 aircraft to be delivered in November and later, according to Emirates.