on October 28, 2015
Luggage manufacturer Andiamo is seeking crowd-funding to bring the latest smart suitcase to market.

I have been a fan of Andiamo luggage since the ‘80s when I became acquainted with the company’s “bomb cloth” luggage. Manufactured to military specifications, the material had the highest abrasion and tear resistance in the industry.

Marketing materials said one could even poke a 10-penny nail through it, scratch the surface with your fingernails and close the hole made by the nail. The durable material separated to allow the nail to pass through the weave, so no actual damage was done. I know it worked; I tried it myself.

Fast forward some 30 years and Andiamo is now working on bringing a smart suitcase to market. Called Andiamo iQ, the 100 percent polycarbonate case with a lightweight aluminum frame “was created to act as an integrated technology platform that accompanies your luggage,” according to company marketing materials.

It includes its own Wi-Fi hotspot, a built-in scale to help avoid overweight charges, a mobile power pack for charging the plethora of devices we now carry and an anti-theft distance alert that sends a text message if the luggage moves 30 meters (approximately 98.4 feet) away from you. That same device can also send an alert as the luggage is coming toward you on the ramp. Finally, the case includes TSA-approved locks and 360-degree, silent spinner wheels.

Initially, the bag will only be available as a carry-on, so some of the features including the built-in scale and the feature that alerts when your bag is coming toward you won’t be as useful as others, but the company has clearly put thought into this bag. The power pack is removable so you can take it with you whether sight-seeing or attending a meeting. The Wi-Fi can be used anywhere in the world with the purchase of a local SIM card, allowing the bag’s owner an alternative to the occasionally high fees and spotty reception of public or hotel Wi-Fi signals. 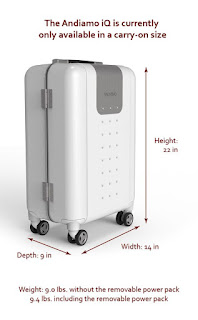 One of the facets that caught my attention was the weight. Even though checked bags are seldom weighed, many airlines do have weight limits they can enforce. While some are as high as 40 pounds, Hawaiian Airlines limits carry-on weight to 25 pounds and many others limit carry-ons to 22 pounds (10 kilograms). With the built-in electronics, I wondered how the bag compared to other carry-ons and how much weight capacity would be available for clothing and other travel paraphernalia.

According to the advance marketing materials, the 9-inch x 14-inch x 22-inch carry-on weighs 9.4 pounds including the removable power pack. For comparison, I weighed the carry-on I reach for most often, which is the same size as the Andiamo iQ. To my surprise, it weighs 11.2 pounds empty. Advantage Andiamo.

Although a well-established purveyor of high quality travel ware, Andiamo is taking what strikes me as an unusual method for an established company to bring a product to market: crowd-funding.

The company has launched an Indiegogo campaign to raise $50,000 in 45 days and is offering deals on the bag to the first 1,000 contributors. The first 50 will be able to pre-order an iQ for $199, which the company says is 67 percent off the suggested retail price. The next 250 will be able to order the bag at $249, the following 350 at $299, and the final 350 at $349. The company is estimating delivery in December. More information on the Indiegogo campaign is available here.

The company chose to take the crowd-funding route, not because Andiamo does not have $50,000 in its research and development budget but as a way to assess the market for its new product.

"We chose crowdfunding as the path to market for Andiamo iQ because we want to make sure that what we think people want, is in fact what they actually do want," the company wrote on its Indiegogo site.

I was impressed enough to take part in the crowd-funding effort. Once I receive the suitcase, I will review it and share my findings here.