Coming soon to an airport near you: motorized luggage

on September 03, 2015
Two Chicago-based entrepreneurs have launched what they are calling a revolutionary new concept in travel: a suitcase that will appeal to tech enthusiasts, savvy travelers and everyday individuals looking to get from Point A to Point B efficiently.

Called the Modobag, it is being billed as “[T]he world's first motorized, smart and connected carry-on.”

Yup. In addition to two USB ports to charge phones and portable electronic devices and companion iOS and Android GPS navigation apps to track the location of Modobag anywhere in the world, the bag has a Lithium battery-powered electric motor capable of propelling the bag at up to eight miles an hour. 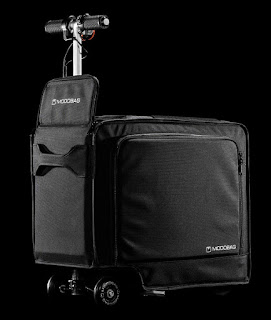 “But I only walk about half that speed,” you say. Not to worry; the Modobag can also carry its owner, provided s/he weighs less than 200 pounds. Oh, and there’s a Modobag Max for riders up to 260 pounds.

Or at least, there will be if entrepreneurs Kevin O'Donnell and Boyd Bruner can get the funding they need through an ongoing Kickstarter campaign.

The two have spent the past twelve months developing a prototype, sourcing component parts, fine-tuning CAD blueprints and testing their design, according to a news release announcing the product and the campaign. They assembled a team of accomplished technologists, designers, marketers and road-tested travelers to help them bring the Modobag to market.

Before launching the Kickstarter campaign, O’Donnell "test drove" the Modobag at heavily trafficked airports, including O'Hare, JFK and LaGuardia.

"From the first-time traveler to the veteran flight attendant, there was widespread agreement that Modobag will help make travel more functional and fun,” he said. “Where once travelers had to run through the airport with heavy gear to catch connections they can now get where they need to be on time, on their Modobag."

While Modobag was originally conceived for air travel, usability testing revealed the concept lends itself to more than just travel.

"It helps sales professionals get to appointments. It helps commuters get from home to station to workplace. It helps college students maneuver around campus,” Bruner said. “And it's perfect for the urban day-tripper who wants to get around town without the hassles of cabs, buses or trains."

As with other electrically powered vehicles, its range is limited. In the case of the Motobag, that is six miles – plenty of range to get a traveler between gates in an airport or down a city block. 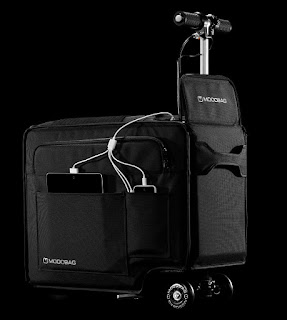 Key features of the bag include a ballistic nylon shell with 2000 cubic inches of stowage space, which is 85 percent of space in a standard carry-on. It uses polyurethane composite wheels to ensure smooth transport whether using the motor or the pull-behind option. In addition to its two USB ports, there are cushioned storage compartments for phones and portable electronic devices. And it is designed to be compliant with Transportation Security Administration (TSA) requirements.

Its weight could limit the bags' usefulness in certain situations, as the Modobag weighs 20 pounds empty. The maximum carry-on weight allowed by most U.S. airlines is 40 pounds but Hawaiian Airlines limits carry-ons to 25 pounds and many international carriers have limits that are even more restrictive. Germany's Lufthansa, for example, limits carry-ons to eight kilograms (17 pounds, 10 ounces) while Japan's All Nippon Airways (ANA) limits the weight of carry-ons to 10 kilograms (22 pounds).

Still, its creators are optimistic.

"Modobag is one of the most innovative and exciting advancements to hit the travel industry since rolling suitcases were introduced in the 1970s," O'Donnell added.