on August 28, 2015
Both airports in Beijing, China will be closed for several hours on Sept. 3 while the city holds a parade commemorating the 70th anniversary of the end of World War II, and airlines are warning passengers traveling to or through Beijing to expect severe delays.

No commercial air traffic will be allowed at Beijing Capital International Airport (BJS) or the smaller Nanyuan Airport (NAY) between 9.30 a.m. and 12.30 p.m. local time on Sept. 3, state news agency Xinhua reported on Aug. 1. However, Japan’s All Nippon Airways (ANA) is warning its passengers that air traffic will be prohibited between 9 a.m. and 1 p.m., and that "[T]here is a high possibility that delays of flights will occur before and after … this prohibition period due to traffic jams on the runways in Beijing.” 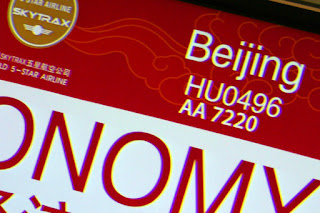 Many airlines have cancelled flights scheduled during that window, but passengers are being warned to expect hectic travel throughout the day, as many charter flights are also expected to use the airports, Xinhua reported.  BJS handles more than 1,500 flights a day while NAY handles more than 100. However, there are no estimates available as to how many of those flights will be affected.

Restrictions on the airspace over the capital city have been in effect since Aug. 1 to allow the air force to practice its maneuvers in advance of what is being called mainland China’s biggest military display in modern history. Altitude restrictions will remain in place until the event has concluded. Helicopters, gliders, motorized paragliders and hot-air balloons were banned from flying over the capital starting Aug. 22 and will not be allowed to fly again until Sept. 4.

This is not the first time air travel into and out of Beijing has been restricted for a celebration. Airspace restriction were also imposed for the National Day parade in 2009, part of a security clampdown that The Sunday Times of London described as “exceeding anything seen for the 2008 Olympic games.” All basements in the city were subject to inspection by police, while some restaurants with roof terraces were not permitted to seat patrons on sides overlooking the street where the parade would take place, according to the Associated Press.

Japan formally surrendered on September 2, 1945 to Allied forces with a signing ceremony aboard the battleship U.S.S. Missouri in Tokyo Bay. To mark the anniversary of Japan’s surrender, Beijing has declared Sept. 3 "Victory Day" and has established a public holiday period that will extend through Sept. 5.

Few other details about the scope of the parade have been provided, though displays of advanced military hardware from all the main branches of the PLA are expected, as was the case during the National Day parade in 2009.