For the survey, the company polled more than 11,000 leisure and business passengers who flew on a major North America carrier between March 2014 and March 2015. The study was fielded between April 2014 and March 2015 and measured passenger satisfaction based on performance in seven factors. In order of importance, they were: cost and fees; in-flight services; boarding/deplaning/baggage; flight crew; aircraft; check-in; and reservations.

First-place JetBlue's score of 801 made it the first airline to ever surpass 800 points within the segment. The honor brought JetBlue its 11th consecutive J.D. Power recognition, which the airline’s CEO credited to its unique approach to customer service.

"We have never stopped believing that our mission of inspiring humanity sets us apart from every other airline," Robin Hayes, president and CEO, said in a statement. "Thanks to our 16,500 crewmembers who live and breathe our unique culture every day, the JetBlue customer experience is not easily imitated or duplicated by our competitors. That differentiator has helped us to earn this important recognition for eleven years and counting.”

"This recognition is a credit to our amazing employees who provide our customers with outstanding service every day,” Brad Tilden, Alaska’s CEO, said in a statement announcing the honor.

Alaska Airlines ranked highest of any traditional airline in six of the seven categories surveyed. The only category in which it did not top the list was in-flight services.

While costs and fees were cited as the most important factor, J.D. Power said the survey responses showed that passengers consider service crucial.

“Many airlines realize that they are not in a commodity business and that hospitality and service go a long way in differentiating them from the other airlines,” Rick Garlick, global travel and hospitality practice lead at J.D. Power, said. “Hospitality and service impact loyalty and return on investment with a high percentage of loyal passengers who are better advocates for the airline.” 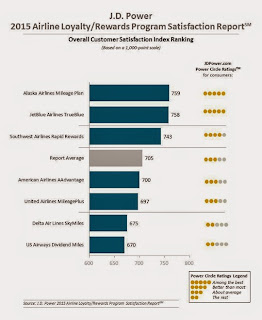 The Airline Loyalty/Rewards Program Satisfaction Report ranking is based on six factors, including ease of redeeming points/miles; reward program terms; account maintenance/management; ease of earning points/miles; variety of benefits available; and customer service. The report, which measures customer satisfaction with airline reward and loyalty programs, is based on responses from more than 3,000 airline loyalty and reward program members surveyed in March 2015.

Alaska officials cited the flexibility of their frequent flier program as among the primary reasons for its success.

"Alaska Airlines Mileage Plan is designed to be in a class of its own by offering customers generous rewards based on miles flown, access to 14 airline partners to earn and redeem miles on when they fly, and the ability to earn elite status faster than any other airline program," Sangita Woerner, Alaska Airlines' vice president of marketing, said.

He noted that Mileage Plan members have the flexibility to mix and match award shopping in a variety of ways, including shopping for one-way or roundtrip award travel on any partner airline and combining airlines in one reservation using two types of awards.

Alaska’s Mileage Program is one of a dwindling number of programs that are still mileage-based; lead by Delta’s switch in February 2014, other major carriers have switched to a revenue basis, meaning points are accrued based on dollars spent rather than miles flown. United Airlines (NYSE:UAL) announced in June 2014 that it would follow Delta’s lead.

On a personal note, I have been a fan of Alaska Airlines since I moved to Seattle in 1983 and today it is my preferred carrier for domestic air travel, thanks in large measure to its excellent customer service and operational performance. It therefore came as no surprise to me that Alaska Airlines ranked highest in airline customer satisfaction among traditional carriers.

Regular readers of this blog may be somewhat puzzled by my declaration that Alaska is my preferred domestic carrier in light of some posts in which I have been critical of the airline. They needn’t be surprised. My pledge, as both a mainstream journalist and as a blogger, is to call things as I see them, stripping off the sugar coating and/or slicing through the spin when needed. In this case, neither is necessary. J.D. Power is a well-respected survey firm, the praise from the airline’s passengers is quantifiable and legitimate and, in my professional estimation, also well deserved.