on February 01, 2019
I have relatives who lived through World War II in Eastern Europe, and I remember our family falling silent as we listened to their stories. But no matter how vivid and compelling oral histories are, seeing historical sites with your own eyes creates an impression that mere words alone, whether written or spoken, simply cannot convey.

That was my experience upon visiting a number of famous and infamous sites from WWII during my recent trip to Poland.

My first stop was Oskar Schindler’s Enamel Factory and Museum across the Wisła River from the Kazimierz, or Jewish Quarter of Kraków. Schindler’s factory coated tinware, including that used by the military, with enamel for greater durability and longer life. His factory was deemed essential to the war effort and that designation became a decisive factor that enabled him to help his Jewish workers.


As detailed in the 1993 movie Schinder’s List by Steven Spielberg, Schindler risked his own safety and that of his family by listing some 1,200 Jewish employees as “essential employees”, thereby gaining them exemptions and saving them from being consigned to one of the nearby concentration camps, including perhaps the most infamous: Auschwitz.

Schindler’s factory, at Lipowa 4, was allowed to sit idle for many years but, in 2010, the Historical Museum of the City of Kraków opened the permanent exhibition titled Kraków under Nazi Occupation 1939-1945 in the administrative building of the factory. The exhibition is open seven days a week, though hours vary depending on the season. General admission is 19 złoty, or about US$6. Admission is free on Mondays but the number of tickets is limited. More information is available here.

Visitors can get a sense of what life may have been like in Kraków from its prewar days through its postwar recovery via the exhibition’s multimedia approach. Visitors hear the city’s sounds, walk along cobblestone streets, watch video recordings of residents who recount their personal life stories, and read hand-written accounts of the events of the time.

One of those I found most moving was written by an 8-year-old boy who lived in the Jewish ghetto at the time the Nazis determined to build a wall around the area to contain its residents. The little boy’s name was Roman Polanski.


Polanski’s note above reads, “I suddenly realized that we were to be walled in. I got so scared that I eventually burst into tears.”

Sections of the wall, with its top pieces deliberately designed to look like headstones in a cemetery, still exist and are within walking distance from the museum.


Other facets of the museum are equally moving. The walls of one room are plastered with examples of Nazi propaganda, and visitors have to wend their way through a phalanx of Nazi flags, a stark reminder of the enemy’s omnipresence.


While his actions were unarguably heroic, Schindler was by no means alone is his efforts to save Jewish lives.

Tadeusz Pankiewicz was a Polish pharmacist who operated the "Under the Eagle Pharmacy" (Apteka Pod Orłem) in the Kraków ghetto during the Nazi occupation. The pharmacy was situated on Plac Zgody, less than 600 meters west of Schindler’s factory, and was one of only four prewar pharmacies within the walls of the Kraków ghetto owned by non-Jews.

The pharmacy’s prewar clientele included both Polish gentiles as well as many of the area’s Jews. Pankiewicz, a Roman Catholic, was the only proprietor to decline the German offer of relocating outside the ghetto. He was subsequently given permission to continue operating his establishment as the only pharmacy in the ghetto, and to reside on the premises. 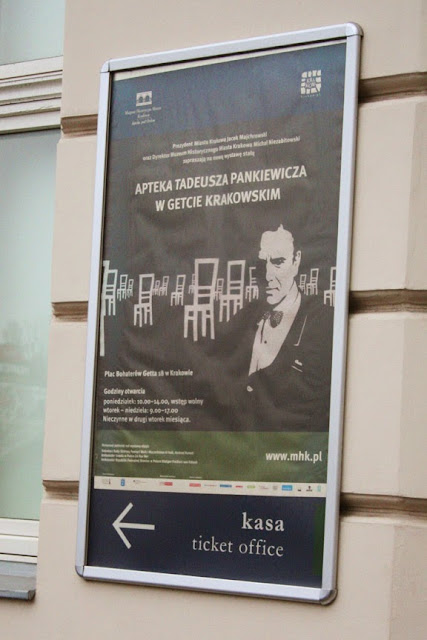 His staff was given passage permits to enter and exit the ghetto for work, which gave them an opening to bring assistance to the area’s Jews. Under cover of darkness, Pankiewicz’s staff members would often smuggle in fresh food, produce and information for the ghetto’s residents, bribing the guards with some of the scare foodstuffs.

In addition, Pankiewicz supplied often-scarce medications and pharmaceutical products to the ghetto's residents, often without charge. These items substantially improved their quality of life and, in addition to health care considerations, they contributed to the residents’ very survival. In his published testimonies, Pankiewicz made particular mention of hair dyes used by those disguising their identities and tranquilizers given to fretful children required to keep silent during Gestapo raids.

Finally, the pharmacy became a meeting place for the ghetto's intelligentsia, a hub of underground activity, and a shelter for Jews facing deportation to the detention camps.

Pankiewicz’s Apteka Pod Orłem on the Plac Zgody, which has been renamed the Plac Bohaterów Getta (Ghetto Heroes’ Square), has become affiliated with the municipal Historical Museum of Kraków and tours are available.


The plaza itself, which was the site from which many Jews were deported, is today the site of a stark memorial that I found initially puzzling but which quickly came into vivid focus.

The memorial consists of empty chairs, seemingly abandoned without explanation. But the explanation is this: When ordered to report to the train stations for transportation to nearby concentration camps, many decided they would need a place to sit and carried chairs with them. However, the Nazis manning the trains ordered that the chairs be left behind and, when the trains departed, all that remained on the otherwise-empty platforms were scores and scores of empty chairs.

To call the memorial “haunting” would be an understatement; each chair represents 1,000 victims. An interesting side note: the memorial was financed by Roman Polanski.


The proximity of things was another facet I found surprising. Literally thousands of those loaded onto train cars at the Plac Zgody were taken less than two kilometers south, to the infamous concentration camp of Płaczów. Unlike Auschwitz-Birkenau, where facilities have been preserved and formal tours are the norm, Płaczów resembles an open park space that has gone untended. While there are some modest markers adjuring visitors to “Please respect the grievous history of the site,” the area is largely unmarked.

In addition to whatever remains exist from the two Jewish cemeteries once located on the site of Płaczów, it is estimated that the remains of 8,000 to 10,000 prisoners are still located within the immediate area of the camp grounds, many of them interred in mass graves. The history of many of the area’s buildings, including the infamous “Grey House” at the corner of ul. Jerozolimska and ul. Abrahama, are well known, though the buildings are either closed to visitors or have been deeded to other owners who now occupy them as their residences.

The Grey House was used as a prison and torture chamber by the SS during the camp’s existence. Although it was used in the movie Schindler’s List as the purported home of camp Commandant Amon Göth who took over Płaczów in early 1943, Göth’s actual home was a short distance farther along the road and is still standing as of this writing. Göth reportedly took pleasure in arbitrarily murdering the inmates and was reputed for firing a high-powered rifle at them from the balcony of that home, which he shared with his mistress to whom he had been introduced by Oskar Schindler. The Grey House has no such balconies.

Contrary to popular belief, the ghetto itself was in the Podgórze area of the city south of the river, not the Kazimierz, or Jewish Quarter north of the river, where the bulk of Schindler’s List was filmed.


Leaving Kraków and returning to Warsaw did not mean my living history lesson was over.

In Warsaw, the Stare Miasto or Old Town was virtually leveled during WWII. Since then, it has been faithfully reconstructed to remain true to the former style of the buildings and has been designated a UNESCO World Heritage site. Plaques on many of the buildings’ corners describe their significance during the war.

Elsewhere in the city, one can hardly turn a corner without seeing some reminder of that dark period in world history. Alighting from the tram near the intersection of Stawki and Gen. Andersa, I came upon the Monument to the Soldiers killed by Soviets.

Warsaw also had a ghetto during the war, and a section of its ghetto wall has been preserved as a memorial. Located near the intersection of al. Jana Pawla II and Złota, it is within easy walking distance of Warsaw Centralna, the city’s main train station.


In the city’s Mirów district north and west of central Warsaw, the Warsaw Uprising Museum pays tribute to the men and women who took part in the Warsaw Uprising of 1944. Hundreds of artifacts are on display, ranging from weapons used by the insurgents to love letters. One of the main attractions is a replica of the bomber Liberator B-24J. Video and audio recordings are also used to convey a very sobering picture of the uprising.

The museum is closed Tuesdays but open the other six days of the week. Admission is free on Sundays, though visitors must still obtain a ticket to gain entrance. More information is available on the museum’s website.

Finally, there is the Gestapo Museum, billed on its sign as, "The only authentic place of Nazi torture in Warsaw: the former Gestapo headquarters." I arrived on a Monday to find it was closed Mondays and Tuesdays, which was probably a good thing.

Certainly, there are too many war-related sites to be seen in a single visit to Poland. Even dyed-in-the-wool history buffs should pace themselves, plan carefully, and see first the things that are most important. Finally, seek out some of the more cheerful, non-war-related things the country has to offer so that you can return home not only better educated but uplifted as well.