on November 26, 2014
As we head into Thanksgiving weekend, here’s something else to be thankful for: gasoline prices in the United States are the lowest they’ve been since 2009.

According to the U.S. Energy Information Administration (EIA), U.S. retail regular-grade gasoline prices continue to decline, averaging $2.82 per gallon as of November 24.

“This average is 47 cents lower than a year ago, and the lowest price heading into a Thanksgiving holiday since 2009,” the EIA said in its “Today in Energy” newsletter of Nov. 26.

“Much of the decline in gasoline prices since mid-2014 is attributable to falling crude oil prices," the EIA continued. "The combination of robust U.S. crude oil production growth, a return of Libyan production (despite recent setbacks), weakening expectations for the global economy (particularly in China), and seasonally low refinery demand has reduced oil prices.” 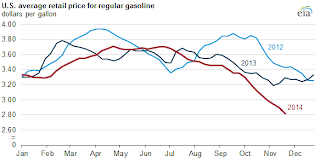 The price of crude oil from other regions of the world also continues to decline. North Sea Brent spot prices have fallen from a July monthly average of $112 per barrel (bbl) to a November monthly average of $80/bbl. As a result, the average U.S. retail regular-grade gasoline price has fallen 88 cents/gal since the start of July, according to the EIA.

Good news indeed for those taking the family car over the river and through the woods to grandmother’s house for the holidays.