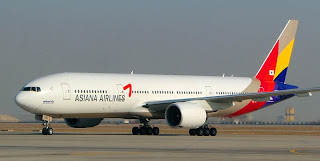 While the cause of the crash of Flight 214 likely won't be determined for months or perhaps even years, USAToday initially reported the crew apparently knew they had a problem as the plane, a Boeing 777 like the one pictured here, approached the airport.

A recording of the airport's air-traffic controllers provided by FlightAware.com, a website that tracks flights, had the controllers assuring the crew that "emergency vehicles are responding. We have everyone on their way."

Early speculation centered on a problem with the airliner’s tail section, but quickly turned to the flight crew when it was learned that one of the crew, though a highly experienced pilot, was relatively new to the 777.

As a pilot with 3,500 hours in my log book, I thought that inexperience in a particular type of aircraft was an unlikely reason for the crash, so I was very pleased when my wife shared this artilce with me (read it here). The author, a commercial pilot. makes some excellent points about the plane, experience, and the mainstream media's rush to judgment.