on January 25, 2013
A fellow blogger gets caught up in the Dreamliner grounding.

Steve Richardson, who runs FlyersPulse.com, was one of the members of the media who rode on ANA’s 787 Dreamliner the day after the carrier started service between San Jose, Calif. (SJC), and Tokyo’s Narita airport (NRT).

The media “fam” tour (short for familiarization) left SJC on January 12 and arrived in Tokyo on the 13th. While they were visiting ANA’s operation and seeing the sights, as I did in October, ANA officials were discussing what to do in the wake of the recent incident that caused an emergency evacuation of one of the airline’s 787s. 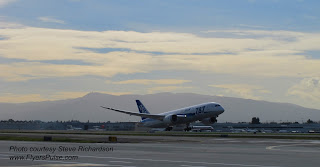 The decision was made to ground the Dreamliners and my counterpart, along with his fellow travelers, were flown back to San Francisco (SFO) on a 777-300. (Oh, the humanity! -- just kidding)

The brevity of his trip, however, did not prevent him from grabbing a couple of shots of the plane, as it landed at SJC and as the first flight took off for NRT.