on June 15, 2012
The Lodge at Suncadia in Cle Elum, Washington, just off I-90 east of Snoqualmie Pass, is a lovely destination. Part of the larger Suncadia Resort nestled in the pines, this AAA four-diamond property has lots to recommend it, as well as some drawbacks potential visitors should know about. 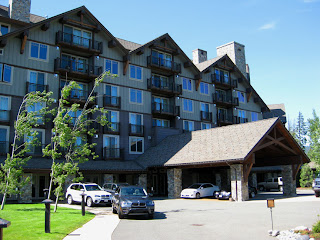 Approaching the building, it has a distinct lodge feel. After checking in at the front desk, guests walk through a Great Room with extraordinary views of the surrounding Cascade Mountains. The ambiance is very pleasant with a large fireplace and comfortable seating areas.

Guest rooms at this hotel range from deluxe guest rooms to a penthouse one bedroom. They come with many of the amenities we expect today, including kitchen facilities. Many units have gas fireplaces, which are a very nice touch any time of year and are especially cozy during the winter. Some units even include a washer and dryer, which are particularly useful for those planning a more extended stay.

Most of the guest rooms at the Lodge at Suncadia are privately owned, meaning there is some variation in décor.  However, hotel personnel told me owners have a choice of only two design schemes, so the variation doesn’t cover a broad range like the rooms at the Inn at Spanish Head in Lincoln City, Oregon, where I recommend guests look at the actual room they’re being offered before accepting it to ensure it meets with their approval. 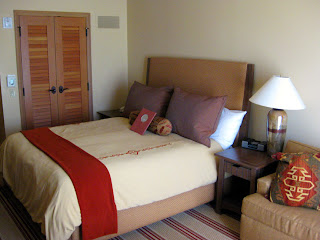 There are three restaurants at the Lodge itself: a restaurant called Portals, a lounge called Fifty 6°, and a combination coffee shop/gift shop. Other nearby restaurants on the resort include the Canary Grill at the nearby Inn at Suncadia, and the Hoist House Restaurant at the on-property winery, Swiftwater Cellars.

One of the bartenders at Fifty 6° told me the kitchens at the Lodge and the winery are careful to coordinate menus, so that each will be offering dishes unique to their facility.

Due to its remote location, many of the staff members are from the surrounding small towns, including many young people who work at the resort during their summer breaks from college. Most of the staff members I encountered were polite and friendly, but have not yet developed the polish one would expect at a four-diamond property in a larger city. For example, they tend to say “no problem” instead of “my pleasure,” and address businessmen as “guys” instead of “gentlemen.”

In addition to staff polish, guest rooms are another area where Suncadia needs to pay closer attention to detail.

When I arrived, there were no glasses in the bathroom. The workstation, while nicely equipped with a very fast, wired Internet connection and a variety of AV inputs to the flat-screen TV, lacked a proper task chair, and the casual chair provided did not allow me to work comfortably.  I’m tempted to say something flippant, like “maybe that’s the point,” but the resort does actively seek convention and meeting business, so many guests expect to work while at the Lodge.

In-room light fixtures use old-school fluorescent bulbs that are not “instant-on”; they take quite some time to warm up to full power and even then, look like bad office lighting. It makes sense to be energy-efficient, but there are better products that will yield the same energy savings.

Maintenance is another area the property needs to improve. For example, the screen door on my room’s balcony was off its track and propped against the fixed portion of the sliding glass door. It should have been put back on before the room was offered to a guest.  Finally, the air conditioning only went down to 68, while most go to 65 or lower. For those of us who like it cool when we sleep, that could be an issue.

The restaurant, Portals, needs to step up its game. After ordering a simple breakfast of scrambled eggs, Canadian bacon, and toast, I waited 15 minutes in a fairly empty dining room for my meal to arrive. When it finally did, the eggs were cold and the Canadian bacon dry.

Several of my fellow conference-goers commented on the resort’s poor cell phone coverage. That could be presented as a plus, but again, the hotel does actively court business meetings and other gatherings where people expect to be able to use their phones.

Standard checkout time is 11 a.m., earlier than most upscale facilities, which offer a noon checkout. Late checkouts are available up to 2 p.m., but the Lodge at Suncadia charges ½ the regular room rate for that additional three hours.

My breakfast, ordered à la carte because their signature offerings don’t include basic bacon and eggs, was $14 including coffee. A bottle of Chateau Ste. Michelle Indian Wells Chardonnay, which my dinner companions and I had shared the night before, was $49. As I write this, the same wine is available at my neighborhood grocery for $14.99; average restaurant mark-up of 100% would have brought the price at the Lodge closer to $29. A bottle of house white, which sells for $9 a glass at the restaurant and bar, was $38 a bottle in the gift shop.  Based on the per-glass price, it should have been closer to $18 at retail.

With that in mind, if a luxurious lodge in a rustic mountain setting sounds like your idea of an ideal location and if you’re willing to overlook some shortcomings, then the Lodge at Suncadia could fill the bill.