VICTORIA, BC is celebrating its 150th anniversary

on March 22, 2012
Incorporated on August 2, 1862, the city of Victoria, British Columbia is quickly approaching its sesquicentennial and the city has created what it calls “a memorable and exciting line-up” of programming for 2012 that “celebrates its rich history and creates a window to its equally promising future.”

I have loved Victoria since the first time I visited in 1983. It has been called the most British city outside Great Britain, but I would take that a step farther and say it represents the best of Britain’s history and culture, updated for the current century.

Victoria embodies many of the things I find charming about London with several important augmentations.

While London is on the Thames, Victoria occupies a point on Vancouver Island that has access to several much larger and, for me, more appealing bodies of water. There’s the Inner Harbour which flows into the Strait of Juan de Fuca. From its eastern shore near Oak Bay, one can access the Salish Sea and the San Juan Islands, and from Sidney - about a half-hour north - the Strait of Georgia. 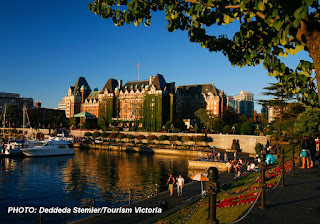 Many of Victoria’s buildings have the charm of London’s Royal Albert Hall (Victoria’s Houses of Parliament are an excellent example) or the Savoy Hotel shown at right (the venerable Empress Hotel being the obvious comparison there). Victoria boasts the same types of street signs that identify London roads, though they are placed higher above streets that are decidedly wider than the London paths that have been paved over and civilized, but which have been widened very little since the Norman Conquest.

Though the city’s culture is very British, Victoria also includes features that are distinctly Canadian, like the incomparable Royal BC Museum, just south of the Empress Hotel.

Victoria boasts some unique attributes including Fan Tan Alley, reputed to be the narrowest alley in North America. Passing through it, one can almost feel the ghosts of long-dead pirates, smugglers, and denizens of opium dens who used the place as a refuge in the city’s early days, often evading pursing authorities by jumping from rooftop to rooftop across the narrow passageway. 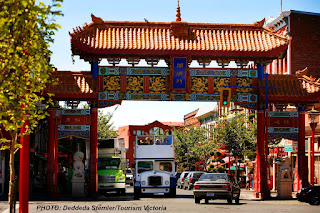 Emerging from the alley, visitors find themselves on Fisgard Street, home to what the city proudly calls China Town, an area still distinctly Chinese in character, unlike Seattle’s International District which is home to several different cultures. For a grander entrance, one can enter from Government Street through the Gate of Harmonious Interest, at left.

The area bounded by Douglas Street on the east and Government Street on the west, Yates St. on the north and View St. on the south is home to numerous small shops and stores run by local artisans. And of course, major retailers including The Bay, abound.

The Bay is the flagship store of The Hudson’s Bay Company, which has been in existence for well over 30 years. Hudson’s Bay Company was incorporated by English royal charter in 1670 as The Governor and Company of Adventurers of England trading into Hudson's Bay. The charter granted the company a monopoly on the fur trade throughout much of British North America for several centuries.

Victoria is a great city for walking, both because there are so many attractions within a small geographic area and because the city is in the rain shadow of the Olympic Mountains, making its weather very moderate. Umbrellas are seldom required and when they are, the nicer hotels often provide them.

Special anniversary events include a Victoria Day parade on May 21, Symphony Splash in July, and a public anniversary ceremony on August 2 in the city’s Spirit Square.

A complete guide to Victoria’s anniversary celebration can be found here.

Getting to Victoria is quite easy, though not always particularly quick.

The fastest way to get there is via float plane from Seattle’s Lake Union or from Kenmore at the north end of Lake Washington. Both locations are served by Kenmore Air. Float planes leave Lake Union or Lake Washington and land directly on the waters of the Inner Harbour about an hour later. From there, one scarcely needs a car unless intent on exploring other areas of the island.

Land-based flights are available from SeaTac Airport but Victoria International Airport (YYJ), is located near Sidney, B.C., and requires another ½-hour on ground transportation to get to downtown Victoria in addition to the time required to check in, clear security, take the flight, then clear Canadian customs.

The Victoria Clipper, a jet-powered, twin-hulled catamaran leaves from Pier 69 on Seattle’s waterfront and arrives at the Inner Harbour about 2 hours, 45 minutes later. The Clipper, which has been operating since 1986, offers one sailing a day until early May, when it moves to a twice-per-day schedule. Like float plane travel, the Clipper provides the opportunity to make a day trip to Victoria, leaving at 8 a.m. (7:30 a.m. from May 5 through the summer), and returning to the Seattle waterfront at 8:45 p.m. (9:30 from May 5 onward). Those schedules allow visitors to get a taste of Victoria without an overnight stay. Reservations are recommended, especially during busier times of the year, including most three-day weekends in the U.S.

Those who prefer to drive have several options.

BC Ferries operate regularly from Tsawassen, B.C., to Swartz Bay near Sidney. Sailings are about 90 minutes in length and, for about half that time, the ferries wend their way through the very scenic (and often, very close!) Channel Islands. BC Ferries have multiple sailings per day.

Alternatively, the Port Angeles, Wash.-based M.V. Coho traverses the Strait of Juan de Fuca, docking at the Inner Harbour about 90 minutes later. Getting to Port Angeles requires a drive and either a ferry ride across Puget Sound or a trip across the Tacoma Narrows Bridge, which levies a toll for southbound cars.

Early risers can take a Washington State Ferry from Anacortes through the San Juan Islands starting May 25. The single international sailing per day will leave at 8:30 a.m. The ferry system gives priority to Sidney-bound vehicles that are in line no later than 8:00 a.m., necessitating an early start to the day. It’s a beautiful trip if Mother Nature cooperates, with a stop at Friday Harbor on San Juan Island before crossing the international boundary and arriving in Canada at about 11:10 A.M. As with land-based flights, the ferry arrives nearer to Sidney than Victoria. A deposit is required on the international sailing to reserve space, and vehicle drivers traveling from one of the San Juan Islands to Sidney must have a reservation.

Travelers who are inclined to spend a night (or several) have numerous options from which to choose. Large national and international chains offer accommodations within walking distance of the Inner Harbour, as do a few hotels with which I am personally familiar.

There is the venerable Empress Hotel, of course. Built by Canadian Pacific and opened in 1908 to serve travelers at the terminus of the CP steamship line just a block away, the Grande Dame of Victoria hotels is now owned and operated by Fairmont Hotels. It is indeed undeniably grand, from its ivy-covered façade to its sweeping staircases and high-ceiling lobby.

The hotel’s Bengal Lounge draws inspiration from Queen Victoria's role as the Empress of India and features a curry lunch, homage to British expats who served in India then found this New World city more appealing than the colder climes of the British Isles. A grand afternoon tea (which, interestingly, is not considered “high tea” despite its grandiosity) is served daily in the hotel lobby. Each of these culinary events is open to anyone (for a price, of course), whether a guest at the Empress or not.

Her rooms have been regularly refreshed to keep up with changing times, but the size of the rooms is limited by the hotel’s basic construction, so most rooms are not as large as facilities built more recently.

To date, my personal favourite (the “u” in deference to the local spelling) is the Hotel Grand Pacific. Located across from the Houses of Parliament, it is a relatively recent addition to the area. Rooms on the north side face the Inner Harbour, while those on the south side face the city and, if on a high enough floor, the Strait of Juan de Fuca and the Olympic mountains beyond. Guests who opt for the “city view” side should insist on a room on the fourth floor or higher for the best view.

For more details, see my previous post on the Hotel Grand Pacific.

I have recently become aware of a new property which seems to hold a great deal of promise and which my wife and I intend to visit in the very near future.

The Magnolia Hotel & Spa, located just north of the Empress, features both a spa and hotel as the name implies, and offers several packages tailored to the taste of the traveler. Featured packages include Fire & Ice, a package including a fireplace room with a bottle of bubbly on ice waiting upon arrival. Packages also include Orcas & Orchids is a package with a two-night minimum that includes a whale-watching cruise to dock of the world-famous Butchart Gardens. Following a tour, guests return to the hotel by motor coach. A more complete post will follow as soon as we have a chance to visit and experience this property for ourselves.

As a long-time fan, I encourage you to take advantage of this unique occasion to discover and enjoy what is unquestionably one of the area’s most enchanting cities.