I received this e-mail the day before Valentine’s Day. 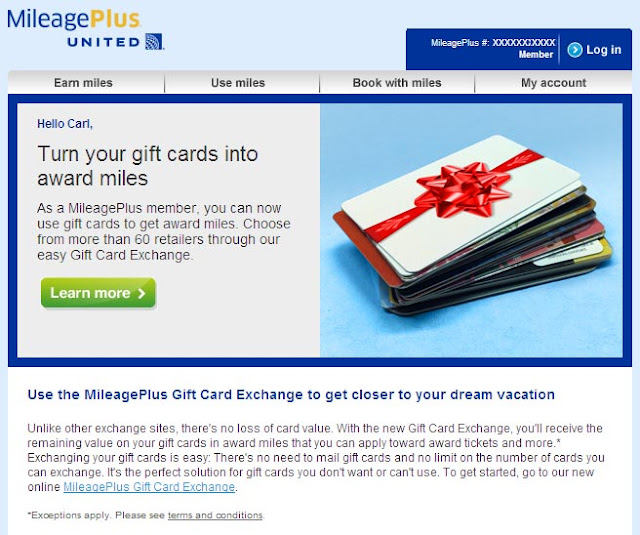 A pivotal phrase caught my eye: “Unlike other exchange sites, there’s no loss of card value.”

Unfortunately for United, experienced travelers will see that for the marketing hype it is because the concept of “full value” is a matter of interpretation.

United sells MileagePlus® miles at $35 per 1,000 miles, plus 7.5% federal excise tax. That’s a per-mile price of 3.76 cents, give or take a few decimal places. Savvy travelers understand the real value of a redeemed frequent flier mile, United’s or any other, is about a penny per mile.

So the question: exactly how much was United offering for those unused gift cards?

When I clicked on the “Learn More” button on the e-mail with the intent of seeing what cards might be exchanged and how much was being offered, I was taken to the following page: 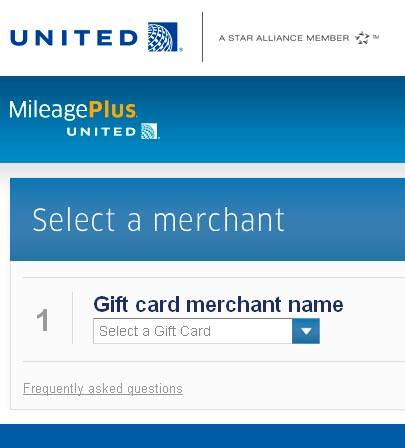 My first impression was that I would be starting the process, which I wasn’t going to do without knowing how many miles I would get per dollar.

The Frequently Asked Questions stated that the amount varied from card to card, but also provided reassurance that cardholders could cancel before completing the transaction if they weren’t satisfied with the amount of miles being offered. With that reassurance, I attempted to exchange my Starbucks card to see what I’d be offered.

For its value of $29.88, I was offered 800 miles, which is slightly less than the 3.76 cents a mile United charges to buy miles outright.

I chose to keep my card.

When I wrote this post on the morning of Feb. 16, a round-trip economy ticket booked on United.com from SEA to JFK leaving April 13 and returning April 17 could be obtained for 37,500 miles. That represents a blend of a standard award in one direction and a saver award in the other.

At United’s rate, the MileagePlus® miles needed to procure that ticket would cost $1,410. Buying the ticket? $472.20. Buying miles is clearly NOT the economical thing to do.

As long as we’re doing the math, in this example each mile used was worth 1.26 cents, about a third of the amount United charges to buy those same miles. If you used 50,000 miles (a standard round-trip award), the value of each mile would be slightly less than one cent.

Why is this promotion “poorly conceived”? Two reasons.

First, it offers no additional value to MileagePlus® members, who can already buy up to 100,000 additional miles a year as long as they’re willing to pay $35 plus tax per 1,000 miles. Offering the option of exchanging gift cards doesn't give United’s MileagePlus® members anything they can't already get at the same rate.

Second, an unwanted gift card is probably the easiest thing in the world to regift. Even if you don’t drink Starbucks or shop at Lowe’s or the Gap, chances are someone on your gift list does. Simply tuck the gift card inside a greeting card, and voila! Shopping is done.

They’re just not economical when you purchase them outright.