United Airlines' Economy Plus® Subscription - Deal or No Deal?

on January 05, 2012
When I received the e-mail below inviting me to purchase a year's subscription to United Airlines' Economy Plus®, I was skeptical. A closer look convinced me that I had good reason to be.

The opening line reads, "Purchase now and lock in next year’s extra legroom at this year’s price." United Airlines (NYSE:UAL) appeared to be offering me a year's worth of Economy Plus® seating for $425 (although the price went up to $499 as of Jan. 6). 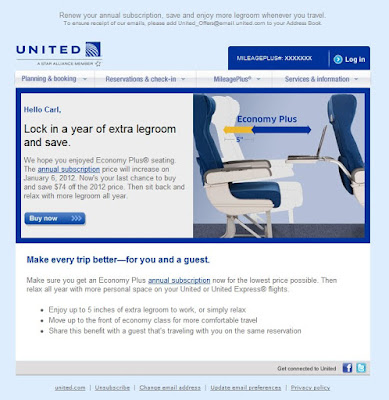 I thought about this offer for several days, then looked into it more closely while making flight arrangements for a cross-country trip I'll be taking next month.

I went to the airline's web site and selected my flights, choosing to purchase a seat in the main cabin as I usually do.

I was really tempted.

So I went to the United web site and read the "Terms and Conditions." I was pleased to learn the Economy Plus® subscription would also cover one traveling companion who was traveling on the same itinerary as me. An added benefit.

However, about half-way through the first bullet point, I came to the critical caveat: Seating in Economy Plus® is not guaranteed, but may be requested and confirmed any time prior to the flight.

That triggered my "a-ha" moment. Thinking back to the booking process I realized that, unlike choosing First or Business class at the beginning of the process, you don't have the option of choosing Economy Plus® going in. Economy Plus® seats are offered on a "space-available" basis.

In my case, all four of my flights had Economy Plus® seats available, but that's certainly not going to be the case all the time. The result is that it could take considerably more that eight flights to make an Economy Plus® subscription pay for itself.

Depending on where and how much you fly, and how far in advance you make your travel plans, it could certainly make sense to take advantage of this annual subscription. But calculate carefully, lest you find yourself holding a subscription for something you're not able to use.