DES MOINES, WA: The Scotch and Vine is Open for Business!

The Scotch and Vine is now open in downtown Des Moines. And as proprietors Dave and Jill intended, it’s like no other restaurant in town.

My wife and I have been to The Scotch and Vine several times since its “soft opening” on June 8 and enjoy it more with each visit.

As one of the first to belly up to their bar at the soft opening, I was very impressed with the changes they’d made to the former home of Butler Bar and Grill. The interior is lighter and brighter, the décor more refined, and the acoustics have been tamed to better showcase the live jazz they feature on weekends. 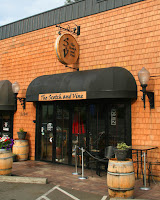 I’m unsure of the source but someone said that, on the day it opened, The Scotch and Vine already had the third-largest selection of scotches in Seattle. I can’t vouch for the ranking, but I can vouch for a remarkable (and growing) selection.

From basics like Glenlivet and Glenfiddich to the more uncommon, the scotch selection is striking! While my absolute all-time favorite is 16-year-old Lagavulin (which of course they have), I’ve also been impressed by many other offerings, including cask-strength Laphroaig (at 115.6 proof!).

The wine selection is also impressive, boasting over 70 varieties including about 30 that are available by the glass. They also have more than a half-dozen local beers on tap, but none that you’ll find at other restaurants along Marine View Drive.

My wife and I have also enjoyed dinner several times. Recently, we went on a Thursday night when my mid-afternoon e-mail query of, “What do you want for dinner?” elicited the response, “Burgers at The Scotch and Vine!”

So my better half and I rendezvoused at the establishment to discover a Winemaker Tasting in progress. $10 bought tastings of five wines from Southard Winery in Selah, Washington. After sips of a Viognier, a pleasant dry Reisling, and a Rousanne, we moved to two hearty reds: the Whipping Boy Cabernet Sauvignon and a Syrah.

Several delighted our palettes but, as we were in a “red meat” mood, we ordered a bottle of the Whipping Boy.

After appetizers of the Très Sheik and the Pit Stop (a sampler of olives), we proceeded to the Lawrence Elk burger – a cute name that was lost on our 20-something hostess, (“Thankya, boyz!”), and the White Tail – a grilled venison burger topped with smoked mozzarella cheese.

Those burgers are two of eight varieties that also include an andouille beef burger, lamb, buffalo, and a vegetarian portobello burger.

While The Scotch and Vine is a new restaurant and represents Dave and Jill’s first foray into the restaurant industry, they seem like naturals. They’re both outgoing and friendly, with a good sense of what “hospitality” is all about. They work the room constantly, often sitting for a few moments to talk with their guests about the scotch, the food, the wine, whatever.

Veterans of the industry, wine guru Chris and executive chef Adam obviously share the same sense of hospitality, also talking with their guests and truly making them feel welcome.

Bartenders Drew and Chris (who goes by Sims to avoid confusion with the aforementioned wine guru) clearly understand that bartending is more than pouring drinks; it’s really “people-tending,” and they do it very well. They quickly learn their patrons’ names and favorite selections, which makes walking up to the bar a bit like walking into “Cheers” must have been. Hosts Melissa and Skye are younger and newer to the industry but no less enthusiastic.

I encourage you to give it a try!